Escape to the Country (3)

Last week we left Jerome and what was left of his gang heading up the centre street towards the RV. Jerome and Washington (aka  Bjorn) continued on towards their objective of the RV leaving Chuckles and Bubba being (they'd become separated and couldn't keep up with the others due to their low fitness)


No new zombies were generated but a lone one homed in on Bubba and Chuckles, leaving Bubba no option but to open fire on the zed as it tried to close in on Bubba.
Even though Bubba managed to riddle the zed with bullets (three hits!) he only managed to knock the zombie down; Chuckles however came to the rescue and stomped down on the prone zombie, killing it once and for all.

Meantime Jerome and Bjorn (aka Washington), continued jogging towards the RV despite the attention they were now getting from the solitary zombies ahead of them. However three more zombies were generated, two to Jerome's right and another ahead of him, which when added to the others slowly encroaching upon him and Washington, made things a little more hairy.

Things did start to look up a for the lead pair as the SP5 was depleted, leaving only two to generate future zombies. Jerome split from Washington to head straight for the RV, leaving Washington cover him whilst he did so.
The next turn saw Jerome and Washington dithering (no activation), and consequently becoming slightly concerned as the zombies continued their advance towards making them a happy meal.
Further down the street, Bubba and Chuckles also stopped to gaze around at the growing zombie menace.
The penultimate spawn point (#4) and closest remaining one to the gang was also depleted, so at least the gang had something going in their favour,
Luckily the gang's indolence didn't last long; Jerome sprang into action and headed straight for the RV; Washington shot at the two closest zombies to himself, luckily killing them both  outright.

Down the street Chuckles and Bubba also decide to make a run for it (finally), with Chuckles taking the lead.
Jerome tested the door lock to the RV (half a chance it was unlocked) and finding it locked smashed the window to gain entry.
Washington, drops a single zombie and manages to knock another down, meantime Bubba and Chuckles continue their marathon race towards the rest of the gang.

The zombies were seemingly stunned by all this new noise and stood watching their fellow undead dropping around them. 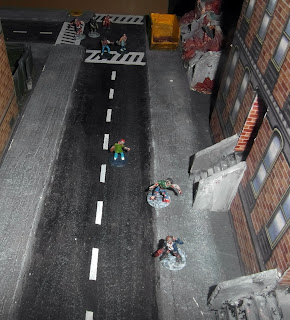 Elsewhere the stream of zombies from the last remaining spawn point were also brought to a standstill.

As Jerome started the engine up (100% chance because of his attribute) Washington slowly walked across the car-park towards the RV shooting at anything that looked remotely dangerous, swiftly joined by Chuckles and Bubba spraying bullets from his smg.
All was at last looking good for the gang!


In the car-park Washington roaming zombie whilst Bubba managed to knock another down, Jerome reverses the RV, narrowly missing a zombie hidden from by the wrecked vehicle.
Gunfire attracts more zombies but they're too far away to bother the gang. 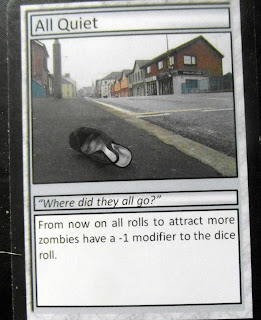 The gang's chance of escape is made a little easier with an event lowered the ER.
My interpretation of the card was that the ER drops by one as my ER is linked directly to zombie generation. 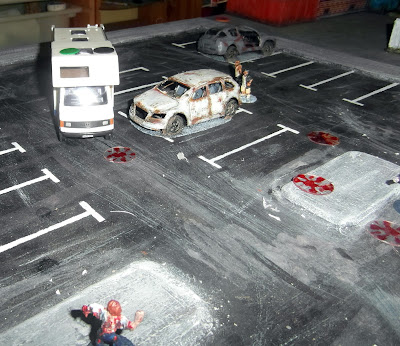 Washington heads to the passenger door, opened by Jerome whilst Bubba and Chuckles head towards the RV. With just a couple of  zombies in their immediate area there is little immediate threat, but elsewhere the zombies are streaming towards the noise of the RV.

With Bubba and Chuckles making it safely into the RV the game was all but over. The remaining few turns of the game saw the zombies having little impact upon the gang's intentions as they closed in on the noise their RV was making.
The RV's movement of course, would have the zombies going one way then the other as the RV sped passed them.
With Jerome at the wheel the RV would attempt to avoid colliding with zombies on the road as it gained speed (I allow an increase of 6" in speed each turn)


There wasn't many things that cold rally go awry with the escape once all the gang were on board, an event, inaction  or an unintentional collision with any zombies on the road would possibly have some effect.
When the player did become inactive a zombie on the road ahead couldn't be avoided, even if the gang could get initiative. When the gang did regain initiative Washington leaned out the passenger window shooting him dead and simultaneously running out of ammo! 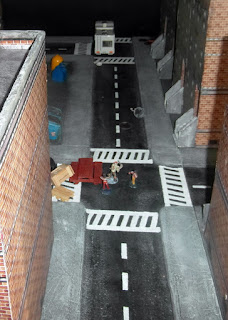 With that final zombie casualty and the gang easily clearing the table, effecting their escape, the game was called.

Two dozen or so zombies had been killed whilst two dozen more were left wondering where their next meal was coming from.

That's it for this week, it was a very enjoyable scenario took several hours to play out over two session but took even longer to write-up!