Escape to the Country (2)

Last week I left you with no more than a teaser for this scenario but the wait is now over.
There were two exits from the building they were currently in, #1 son playing the role of Jerome elected to use the back door, wary of the two zeds out front near, spawn position one.
The usual dice were thrown for the starting number and positions of zombies (very few as it turned out); three PEFs  (Potential Enemy Forces) were also randomly placed (the PEF's have an Initiative of 4 - I don't use REP).


Until I have something more suitable made/painted for PEF's I'm using draughts, they're not numbered  or have any other identifying marks on them, as all my PEFs have the same Initiative value it's irrelevant. They're moved according to their proximity to the gang player figures.

Two PEF's were placed in the car park in the cover of two of the burnt out wrecks, whilst the third was much closer to the gang, near the crossroads in the centre of the board.
In the blurry overhead view below (due to early morning mists and not the crappy cameraman), the gang's starting point, their initial objective( The RV) and their escape route are all shown, together with the starting positions of the three PEFs (shown as red diamonds).  The six numbered circles are where zombies are generated from (spawn points)

The gang couldn't actually exit the table until at least one spawn point was depleted; each turn a die is rolled and with a roll of 5 or 6 one spawn point is depleted, but for this scenario, no matter which was indicated (usually randomly) it would be spawn point one - the gang's exit point.. 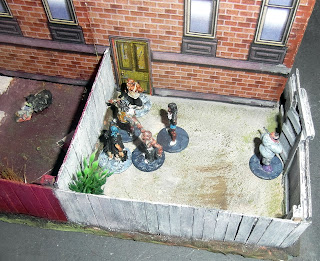 So turn one saw Jerome trying to scale the fence at the back of the house (unsuccessfully despite having two others helping him) whilst Washington stood guard at the gate. Their initial  plan was to go along the back alleys towards, quickly abandoned for a a more direct route down the alley towards Spawn Point 1 (SP '1') and
down the main street.
As the zombies bumbled about without purpose the three PEFs all headed towards the gang at top speed! No new zombies entered the area.

Having been beaten by the fence, the gang stood for the next two turns deciding on their new strategy (they failed to activate during turns two and three).
During the two turn it took for the gang to come to a decision, the zombies had been joined by four more of their brethren, two at SP '5', and one at each of the SPs '2' and '6'.
The PEFs also took a breather before once more heading towards the gang.


It only took until turn 4 before a SP was depleted (SP '1' - mandatory for this scenario). The gang, having finally decided upon a course of action headed for the gate, with Washington covering their rear, whilst Bubba held point.
As the zombies had the initiative for this turn and had to act first, there was no zombie movement, the PEF on the other hand continued their movement towards the party, even if a little slower.


Turn 6 elicited another event "Quick reload" which was allocated to Patience as she was the only character out of ammo.
Jerome ordered the assault on the two erstwhile "friendly" zombies resulting in Jerome himself knocking one of them down and Washington killing one. Leroy and Patience stood watching; Bubba drew his knife to enter the fray and Knuckles brought up the rear. The sole remaining zombie in alley had no recourse but to stand up whilst elsewhere another zombie was generated at SP '5'.
The PEFs moved inexorably towards the gang. 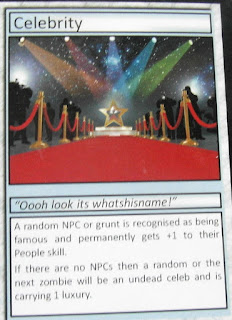 You wait turn after turn for an event then three come along together ! It turns out that one of the party is a Celebrity ! A d6 die roll would randomly determine who it was, if a ganger he would be notorious, if a civilian he/she would be a famous celebrity!
The dice gods determined that it was indeed "Washington" who was recognised as the intrepid TV wilderness survivalist and all-round nice guy "Bjorn Grillene". (Thank my son for the instant background as to why he was famous and blame me for the name)
The last zombie in the alley was becoming tiresome; Jerome was locked himself in combat with it, Washington (Bjorn) charged in to help, but was also unable to affect the melee. Finally Bubba rushed in to try out his luck with his newly brandished knife, managing to knock it down for Chuckles to close in a crush the life out of it. 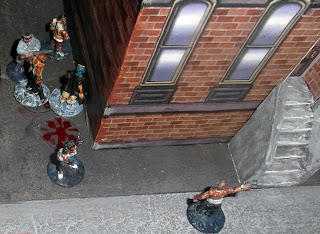 Jax, who is really only a wannabe gangster , refuses to kill in melee (Humanist attribute) and was consequently moved out into the main street as a lookout, closely followed by Patience, no doubt  admiring her newly loaded pistol.
All seemed to be hunky-dory  for the gang as the two zombies in the alley had been dispatched, SP6 was depleted with the zombie activation and even though a couple of zombies had a fleeting glimpse of Jax in the street, they soon lost sight of him as they tried to close.
The gang could have done without the PEF activation though.
Of the two PEFs furthest away; one closed at a reasonably safe rate ending up hiding behind a burnt out wreck and  the next didn't move at all.
However after moving at a rapid rate, the nearest PEF was almost on top of Jax in the Street and had to be resolved.
Throwing possibly the worst possible dice Jax was now facing seven (7!) zeds spewing forth from the building they had been in at the start of this venture.
Had someone left he back door open ? Was there a cellar that hadn't been checked?

The events of the next turn could easily have been taken from a "Carry-on" film. There was no event (thankfully?) but the gang all stood rigid as they gawped at the zombies emerging from the house, well all but Jax and Patience that is! 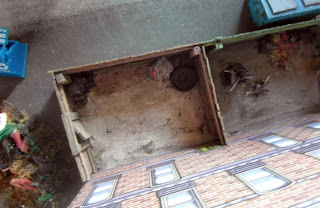 As Jax was within the 6" necessary for the zombies to frenzy towards him (what passes for a zombie charge in my games) he took to his heels and ran towards SP '1' and off the board. The zombies, continued their frenzy, towards Patience who, realising her predicament,  decided she had more pressing business elsewhere and followed Jax's example, by running out of the area. This left Jerome with four now in his gang who all stood watching their comrades depart as fast as their legs could carry them. Still, he did have Washington (Bjorn) !

One of the two remaining PEFs closed slowly in on the gang, usig the back yards, just across the streets  as cover, the other merely ducked down the street ahead and out of sight.
The zombies gained the initiative the next turn and charged in for their quick morning brunch.
Jerome decided to quickly check the gang hadn't been followed and headed down the alley, away from the threat.
Chuckles and Bubba managed to fend off their respective zombie opponents whilst Bjorn (Washington) thinned the numbers out with his shotgun.
After the two rounds of fighting (first the zombies' then the  gang's), the zombie threat had been reduced to three zeds.and Chuckles had been knocked down!
The encroaching threat of the closest PEF erupted into the rubbish heap and turned out to be nothing more than a case of nerves.
In a fine display of shooting, Washington (Bjorn) moved into the fray and saw off the last three zombies, Chuckles picked himself up and Jerome rejoined the gang. 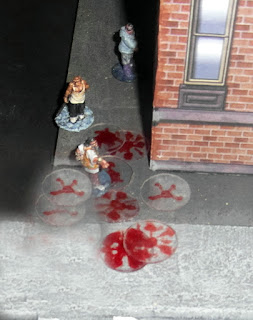 All the gunfire only managed to generated a single zombie, well away from the action at, spawn point '3'. A few zombies were momentarily attracted by the noise, but lost interest as soon as it died down.
As the single remaining PEF remained inactive, for this turn and the next, (along with the obviously sulking lot of zombies) the gang started to make a run for it...
Bubbles and Chuckles were immediately split from Jerome and Washington who raced on ahead of them, whilst they decided sauntering was far more cool and gangsta.

It must have been later than the gang though as the next turn say the sun overhead indicating it was midday and raising the encounter level  to "4". This of course had no immediate effect on the gang's course of action as they all headed off 'at full lick, down the street; all that is except for the two unfit laggards strolling behind "gangsta-style" (It also didn't help that both have poor Fitness abilities and because of their distance from Jerome couldn't use his leadership die to aid their movement!).
There was little immediate threat from the zombies but the final PEF increased the threat levl - Now the Encounter Rating was '5'. In my game this would mean anywhere from 1 to 4 zombies could be generated every turn ! - Things just got very 'interesting'.

That's where I'm leaving it for this week, same time, same place next week if you wish to see how it ends!