I've had these on my to do list for no other reason than they're quick to make (comparatively),
provide some easy scatter terrain and seem fairly iconic in a quite a few zombie novels I've read.
Note though that I have no intention whatsoever of making some attempt at a container port!
First up is a kitbash (how I hate that word) of the three WorldWorksGames containers. I have also made the three individual containers separately, but for some reason the rubbish photographer forgot to get a snap of them.
The WWG containers were the first ones I obtained and the only ones I actually paid out for, my others were all free downloads found on the  Interweb thingy.
These three were obtained from a great site: http://www.toposolitario.es It is in Spanish, but for English readers there is a translate to English button.There are a great many more free models on this site too, but mostly for a futuristic style of game.
Next up are another three 'freebies', but aimed towards children, hence their simplicity, but there is still nice detailing on the doors and it's yet more variation.
These are available from a  German site for children:   //www.maerklinfanclub.de/en/
but you'll have to do a bit of digging around to find them.
Next up are umpteen containers from yet another German site:
http://www.igshansa.de/igsdownloadeng.html
They're in two different sizes for most of them; a 20 foot version and a 40 foot version and are available in three scales, 1/87, 1/100 and 1/200 as they're aimed at railway modellers.
I used the 1/87 versions for mine and re-scaled them to somewhere between 1/43 and 1/60. Shipping Containers come in standard sizes generally with a 10 foot square (about 3 metres) end by multiples of 10 foot lengths.
I chose to do the shorter versions  for gaming purposes.

They come in all colours and have lots of different logos too - there are so many that I wouldn't be surprised if I've missed a few.
All mine (save for one) haven't got a base to them as this made it far easier to pack them out with foamboard reinforcement, made from the numerous pieces of scrap foamboard that I retain for just such uses as this.
The final one of the Igshansa models was photographed by itself as I found it had been omitted after the general photo session of the others. 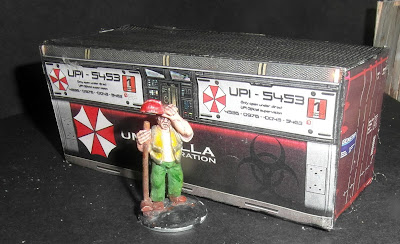 And where would we be without that most damning of all containers - the Umbrella Corp container?
This is one of a series of futuristic conatiners available from :
Antenocitis Workshop
The containers themselves are very 'futuristic, which can just about be made out on the one in the photograph to the left.
They're all (as far as I can tell based on 'Evil Corporations' and there's a lot of them too! I've only made the one for the moment and even that has been modifed a bit. The doors were taken re-sized from another model then coloured to match, whilst the top of the model I replaced using the base, for no other reason than I preferred the look and it took it further away from the 'futuristic' look.
Since making all these I've found a few more  models among my files and I'll probably have another look at some of the Antenocitis ones too for inspiration, if nothing else.

Excluding the solid stack of WWG models (effectively representing 18 containers) I made a total of 28 single container models although there are one or two duplicates amongst them, but no matter, it reflects reality to some degree.

That's it then for another week - hope you found something of interest (and I'm sick of typing the word "container").