Here's the completed Container Office, finished in a bit of a hurry.
It measure a mere 2"x2"x4.5" (height, width length -about 50mm x 5mm x105mm)
I added a few vertical struts to the model for interest and of course the roof was finished off.

The rear (other end from the door) has a small window whilst the non-window side has had three 'struts' for 'decoration'; they're very thin slices of card and give no strength to the model, but do add a little more interest to an otherwise very boring side. 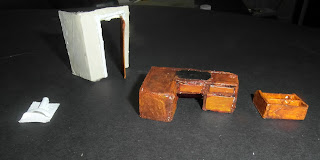 As I hadn't done a detailed interior for some time I made a few items for the interior, as can be seen.
The desk wand bookshelf were made from scraps of fairly thick card whilst the door frame and door were made out of two layers of thinner card, using the thinner card as a hinge in the resulting 'sandwich'
I also utilised bits and pieces from my 'stock' of bits, poster, magazines, newspapers, documents, paintings and so on; some of them can be seen to the right (I used all of these except the 'gun' poster).


After a very swift internal paint job, a paper floor, representing some form of tiled surface was added.
I knocked of the tiling on my printer in black and white on an A4 sheet so very little was used. and much remains.


Here's a view showing how crammed the inside is. I don't think that there is more than a single place where a figure with a 25mm base could stand (directly in front of the desk - in case you're wondering!) .


As can be seen, it's very tight inside and I really should have measured up the desk before setting to make it!
A few other items from my stock of things I add to internal 'fixtures and fittings' can be just about made out.
A pizza, which I've sort of adopted as a trade mark - they're very easy to represent (and are easily identifiable as such with a 'slice' removed),; a fuel can (must get some more of these), some books and of course newspapers.
The desk-top monitor took about 5 minutes to make and maybe another five to paint.

So, what's in the little room at the other end ? The Little boy's room (of course)
The sink was made from a scrap of card, a piece of sprue and cut tablet packaging (I hjave a lot of these).
The toilet was one of many I made two or three years ago from cork .

I've managed to coerce someone to throw dice with me, next week's post will be an AAR !
That's all for this week except to welcome my latest follower  "da Gobbo Grotto" whose blog can be found here; I hope that those reading this find something of interest.

And finally , if you don't know what the WWE have to do with my gladiator project, you can find the answer HERE