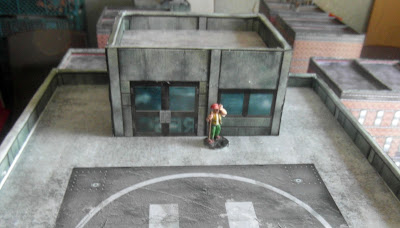 My new build roof exit, was exactly what I had wanted, planned and built, but unfortunately looked was completely wrong!
For gaming purposes I could easily get away with having a building so close to a helipad , but I also didn't want the building to be abutting onto the front wall, which it would have to been to avoid encroaching any further onto the helipad. 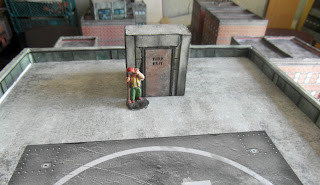 The solution was to make a smaller roof exit, which I did from some of the 'extra' bits and pieces left over from the original big build.The front wall of the exit has had four different bits glued together to make it, but is none the worse for that - it'll do as a stop-gap measure for the moment.
The photograph below shows my preferred positioning for the exit site, giving all around access and not encroaching on the helipad (I should have been an estate agent). 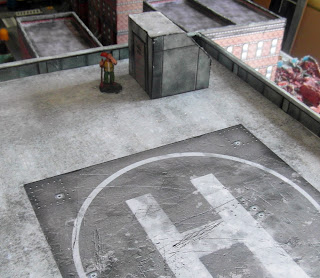 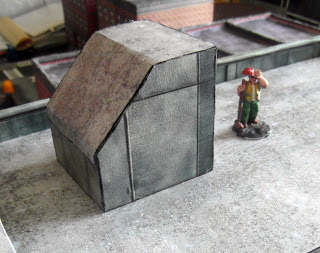 The rear and side for completeness: 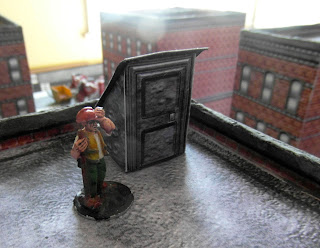 The 'new build' wasn't the only building that I needed roof exits from, as my tenements have also needed them (and would have been quite useful in the last couple of scenarios I played|),
This photograph shows the original roof exit that came with the Twiliglt Street set, but note how small it is compared to my own one above!
The positioning of it is of course pants as there would be no space for stairs up to it in that orientation and it'll be reversed for gameplay purposes, again with sufficient space to place a figure anywhere around it.

Another view, just to show the other side and another orientation that wouldn't make sense for the same reasons as above.
I just need to make another 15 of these and my roof-top exits for my tenements will be complete! These don't take that long to make though, they're a single folded piece of paper mounted onto foamboard walls, whilst the roof is just paper, reinforced with some thin card (cereal packet).
I did vary the colour of the doors a little to give a little more variation, but they are a bit boring.
I've also been experimenting with some more HVAC units (seems to be all the rage atm) to add to my roof-top furnishings and I'll post about those next time.
That's all for this week  except to remind you that my other blog has also been updated and can be viewed HERE, showing for the first time painted figures! (one even human)