I did scratch-build some HVACs and made some card ones for roof furniture quite a while ago, but as my city has grown the need for more has of course been quite apparent as the roofs of my buildings are almost devoid of anything vaguely interesting.Over time I've also accumulated more card buildings from various sources. 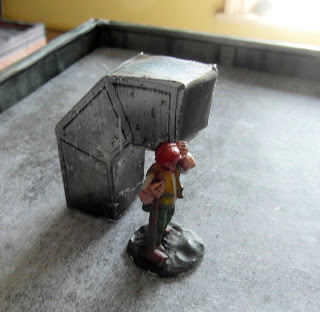 Most of them the HVAC units are of the basic cuboid box shape (as shown above) and hence are fairly easy 'builds', even if I do tend to make them look like they've been built by a five-year-old!
Some however do have interesting shapes to them giving a bit of variety.
The one shown on the right is fairly recognisable as a typical air, one which would be equally at home  on the side of a building as well as the roof. In the photograph Sid is having to hold up the vent as it's top heavy and not stuck down. The angles nature of this model made it quite difficult to pack out with foamboard for strength (Damn you sausage fingers!)
The two HVACs on the left could just as easily be electrical cupboards too, but basically they're just more roof furniture (and cover).
These once more have at least a semblance of an intersting shape to them, even if it's just an extra angled bit tagged onto them.
I do reckon that they'd be fairly easy to make from scratch as they're basically just boxes, but adding the detailing is a pain. For my purposes they're fine as they are, didn't take too long to build and besides I've got another batch already printed out.


I'm sure that there are many manufactures who make much better resin versions of these, but alas as in many things their cost to me is prohibitive.

When I showed my Hospital build I'd omitted
a vital piece(shown left). When playing games, unless buildings are bolted down to the table they always seem to 'drift' around during play.
With the larger 'combination' building that I'd made, the effect would be multiplied as the component parts drifted apart. As I did with my yards. a couple of pies of scrap foamboard (about 1cm apart) glued to a black sheet enables two buildings to be slotted alongside one-another into the gap so at least the entire building will drift and not just one of its component parts.

Next week I'll hopefully have some more boring exciting card boxes to post about, but that's it then for this week, thanks for taking the time to read.

My other blog continues to trundle on, you can read the latest installment HERE
THIS IS A TEST
Posted by Zabadak at 06:18