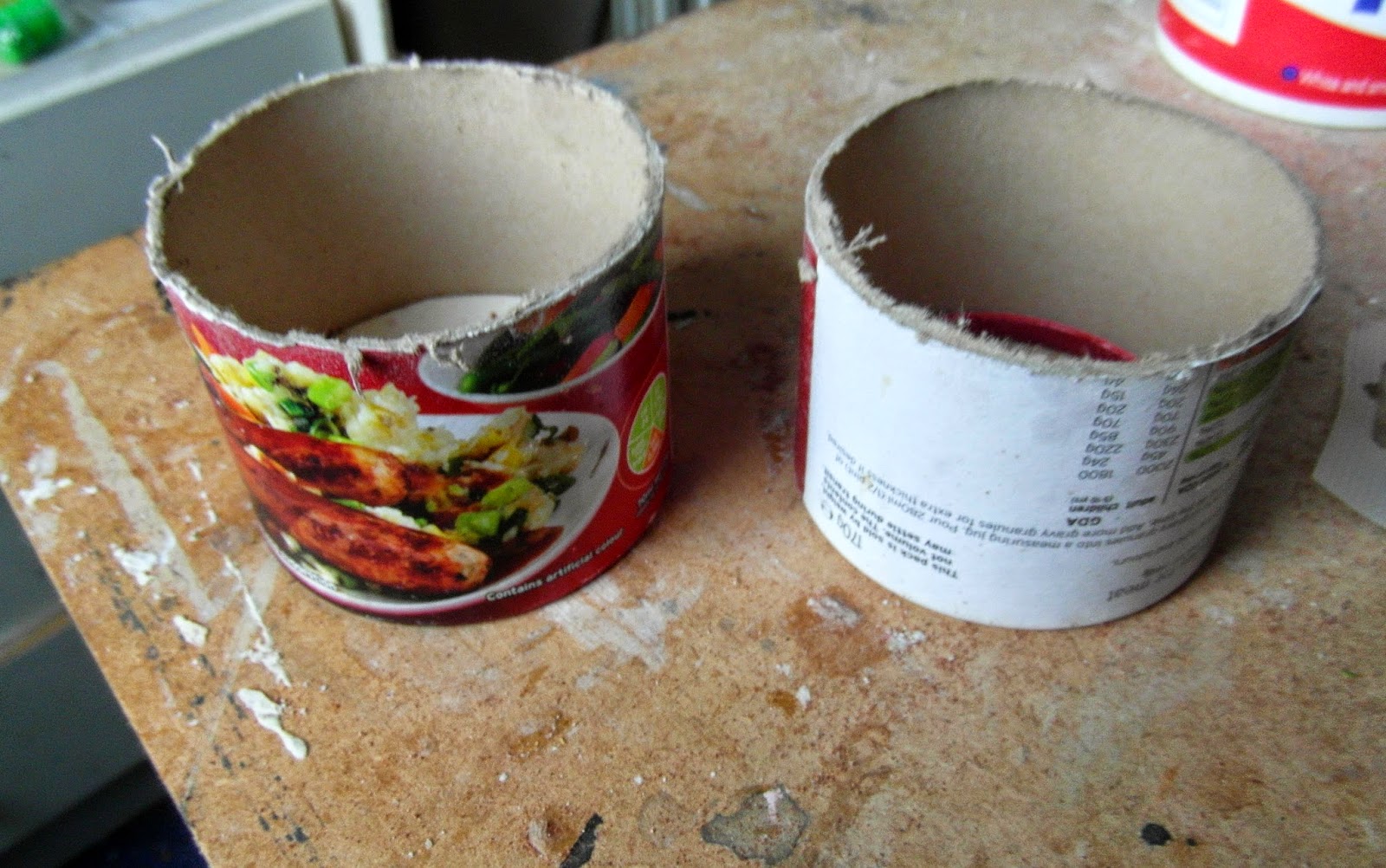 Well I don't have to ask "Can you see what it is yet ?" as the title tells all.
I cut the gravy tube  into two, about halfway down the cylinder (it's about 5" tall and 3" diameter), giving me two pieces, the one on the left (with the internal base) is the one I selected for the tower, though the other was also retained.


The two pieces were tidied up with a file to level out the rough cuts and then sanded  a bit. As the rough bit would be hidden by the roof I didn't worry too much about it.
Next, I counted out 60 coffee stirrers as I was interested to know how many I would actually use for this  build and promptly set up about cutting off one end of each. I tend to only cut one end to save time, as I know that I'll be cutting the other end at some time too. 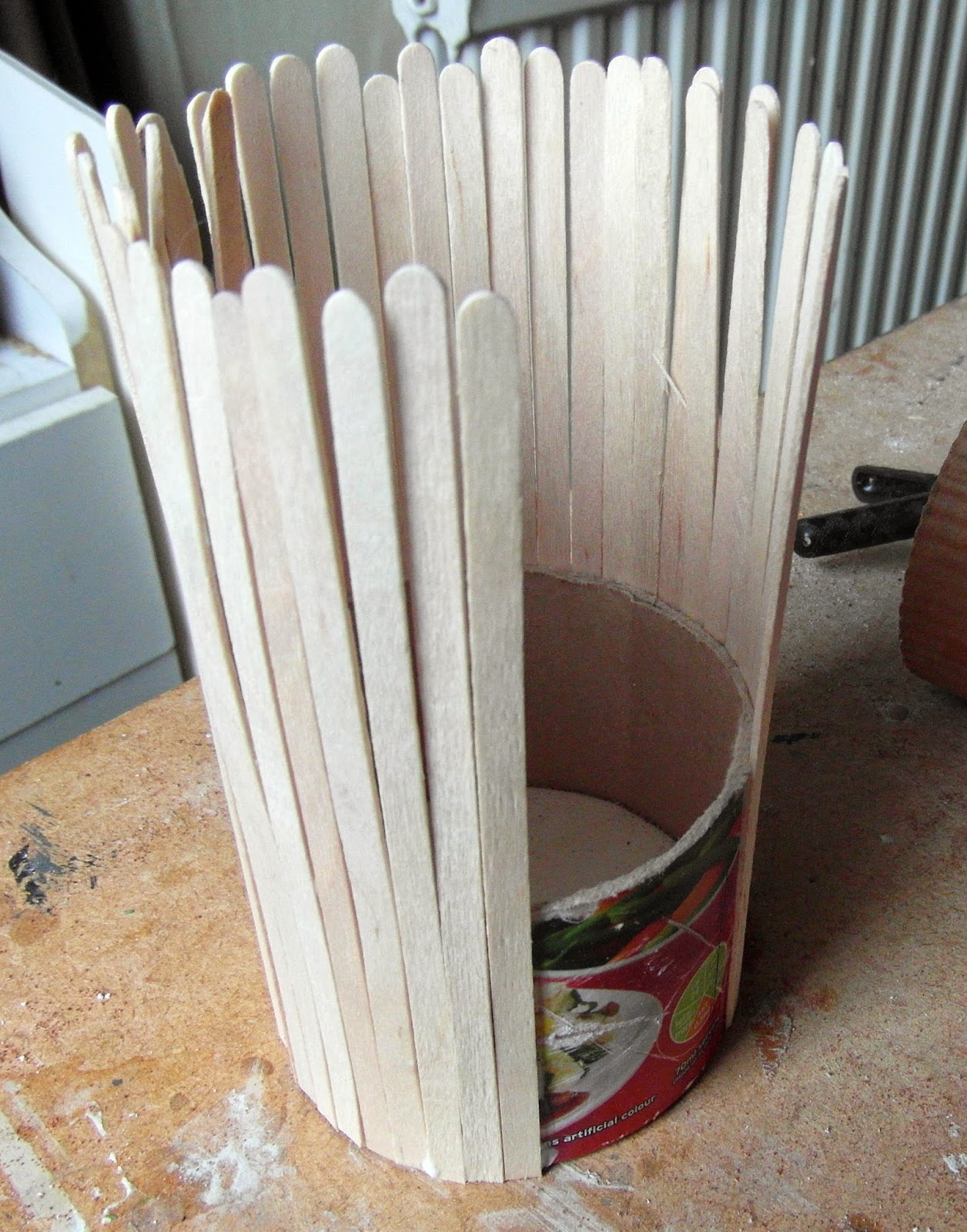 The next step was to glue the stirrers as close together as possible around about three quarters of the base after scoring and roughing up the base with a craft knife. The latter step is to give a bit more purchase for gluing the stirrers.
When set I snipped the excess pieces off, made easier by having the gap already there for just such a purpose. 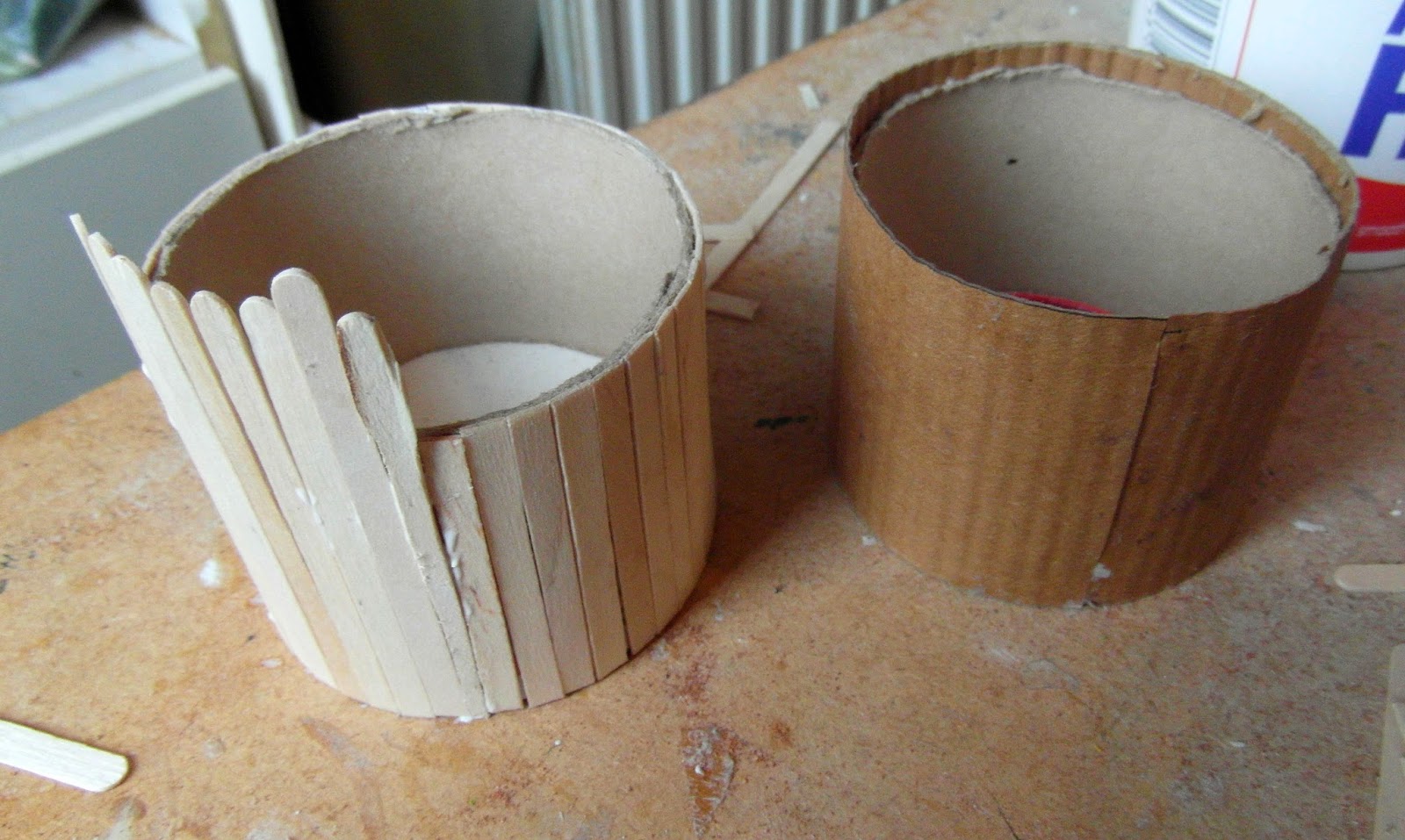 Some of the parts cut off were then glued to the 'gap' and were also snipped off. For variation, the second tower had a piece of corrugated card glued to the outside of it (having scored the surface once more) just in case I was in the mood to make another (I wasn't). 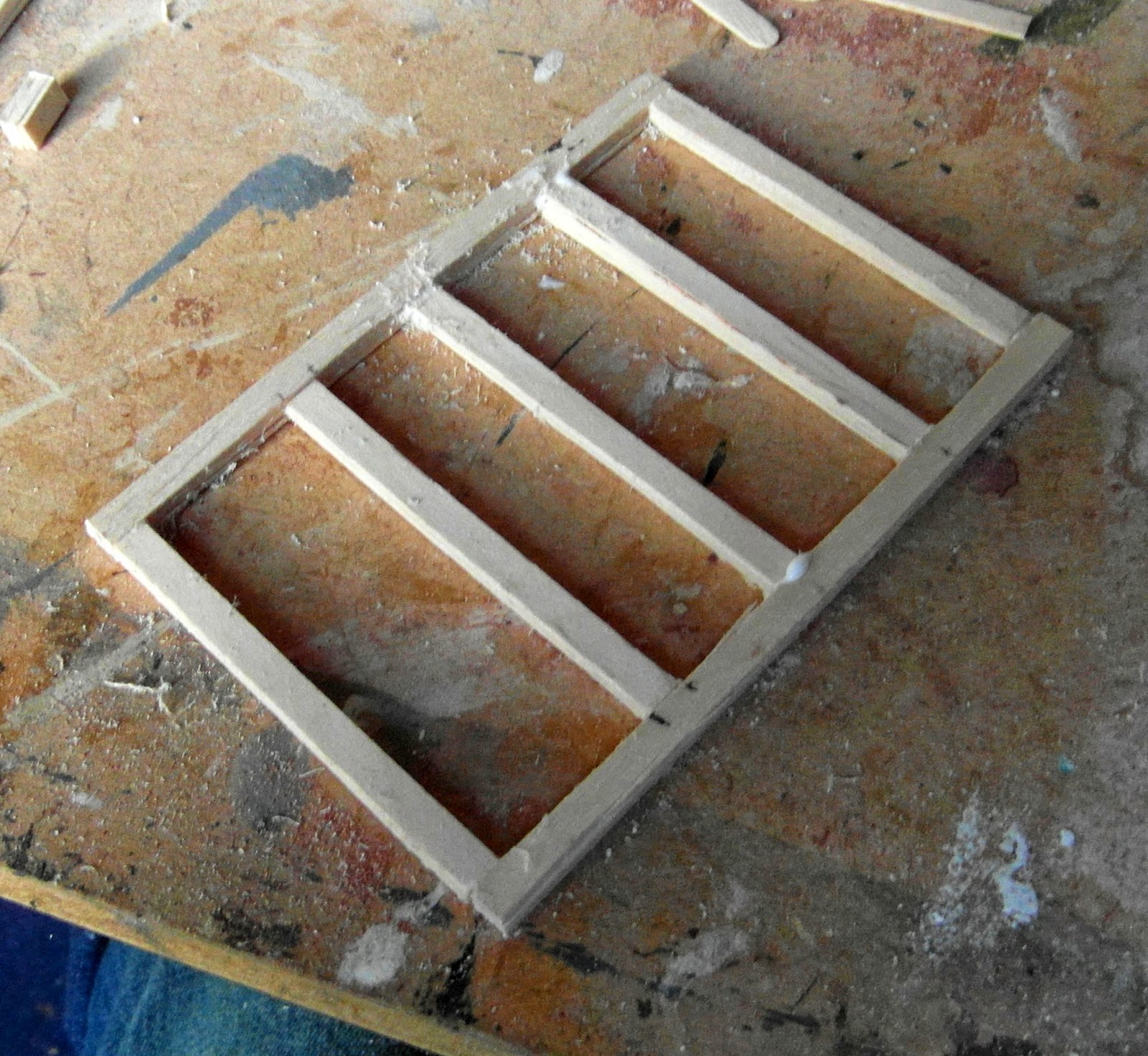 Whilst the two tower's glue was drying, I started on the platform that the tower would sit on.
It's made entirely of coffee stirrers of course but there are four layers of them, making a substantial beam. The width of the platform is about the same size as the base of the tower but the length is the base size plus sufficient room to fit a figure or two.
just for information, I use Evo-stick wood glue for nearly all my coffee-stirrer related builds. 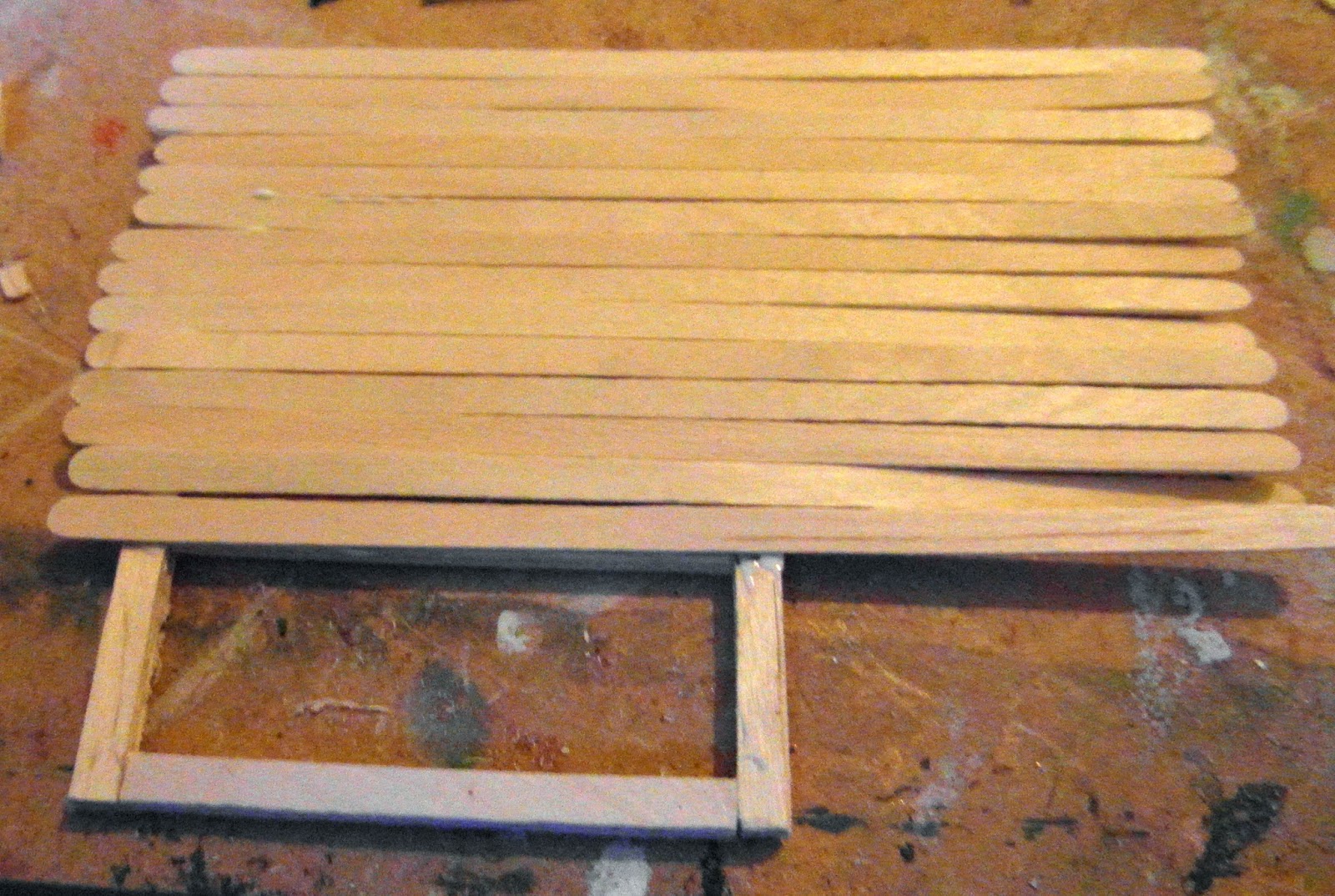 More coffee stirrers were glued and laid across the platform, and you'll note that the ends of these were not snipped off as I knew I would snip these of afterwards, saving a little time. 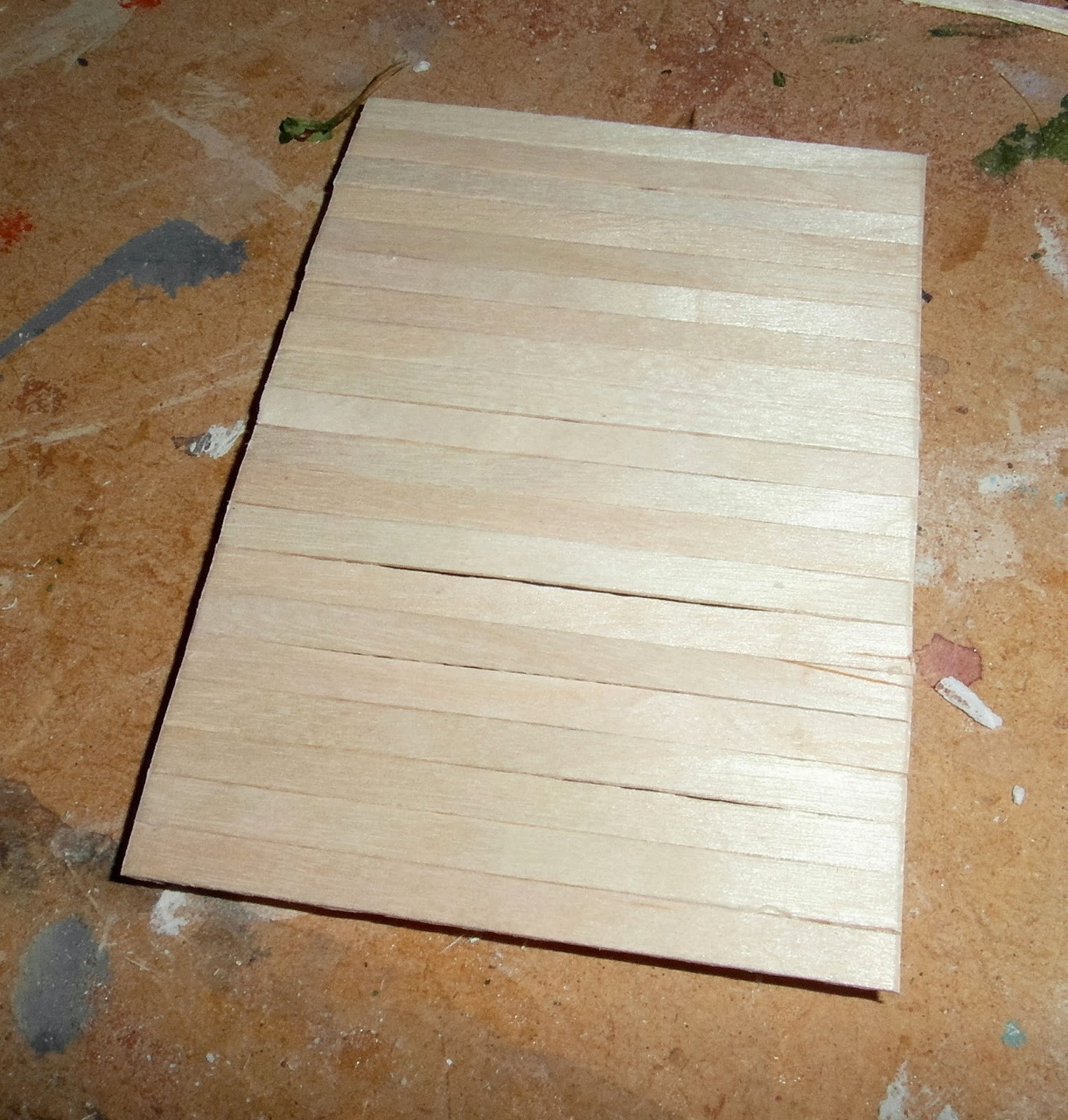 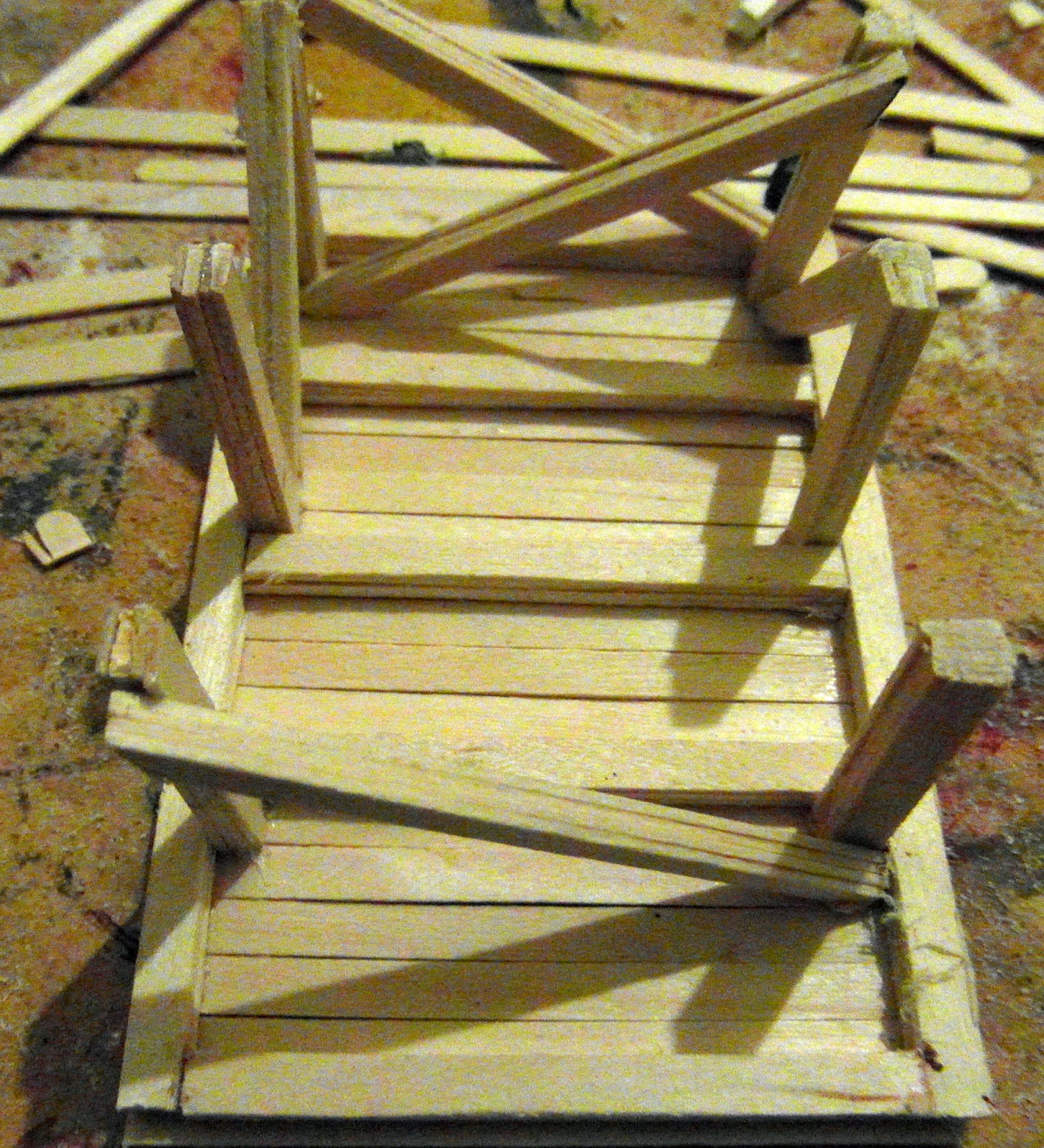 The underside of the platform was next to receive attention with the addition of six supporting legs (I increase this to eight later in the build) and the first of a series of cross beams.
You can easily see in the photograph that for the beams I've used a thickness of four coffee stirrers, which is usual for most of my beam-type builds.
Square-cut length of trim could also be used for this purpose and would save a lot of time, but each would have to be cut with a saw; I've found I can snip two thicknesses of stirrer easily and only resort to a saw for more layers. (I'm also a skin-flint and hence I use coffee stirrers)

The left-hand photo shows the jumble of legs and the need for the whole assembly to be filed down and sanded. 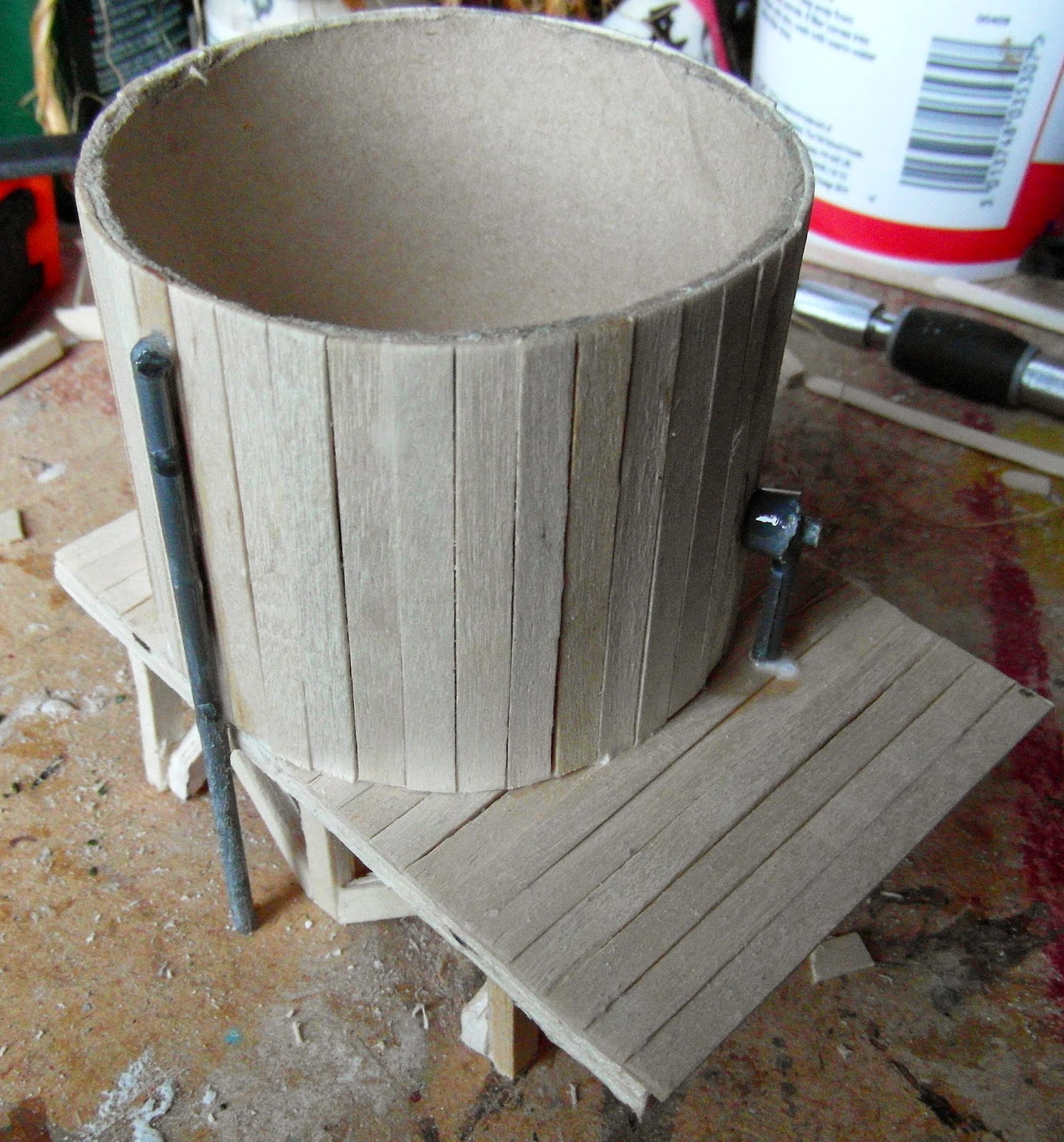 The tower itself was next to be glued to completed platform and some detailing was added at this stage.
First off let me say I have no idea how these tower operate, nor do I claim any knowledge of what they actually look like, so I just added bits and pieces in a pseudo-random way.
The left hand side has a pipe added from sprue whilst the front right has some sort of pillar with gubbins attached, also from sprue (from the Wargames Factory Survivors set if memory serves).
The inside of the tower I wanted to also have a couple of pipes from its centre to the base of the model and they can be just seen in the 'legs' picture above. 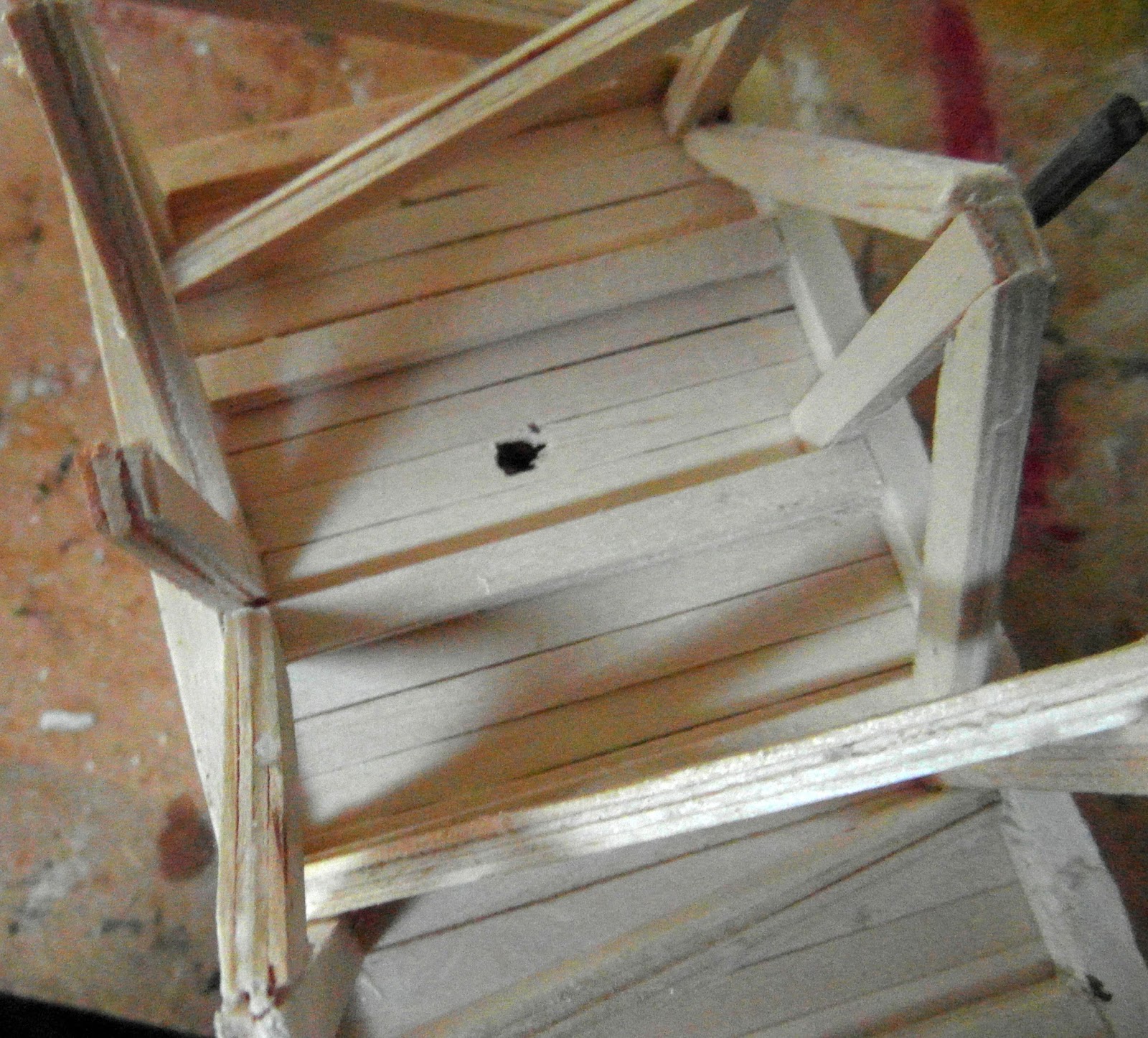 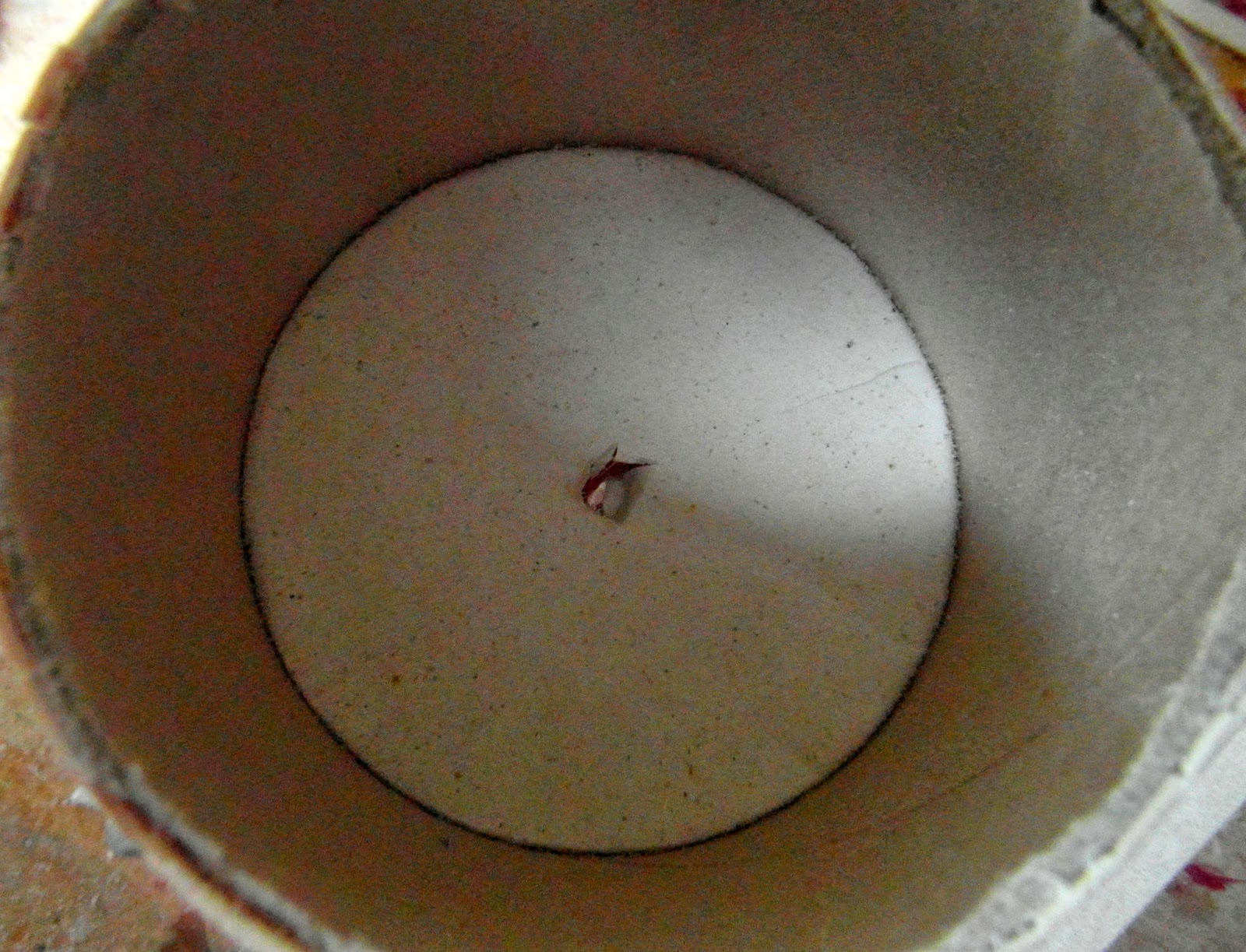 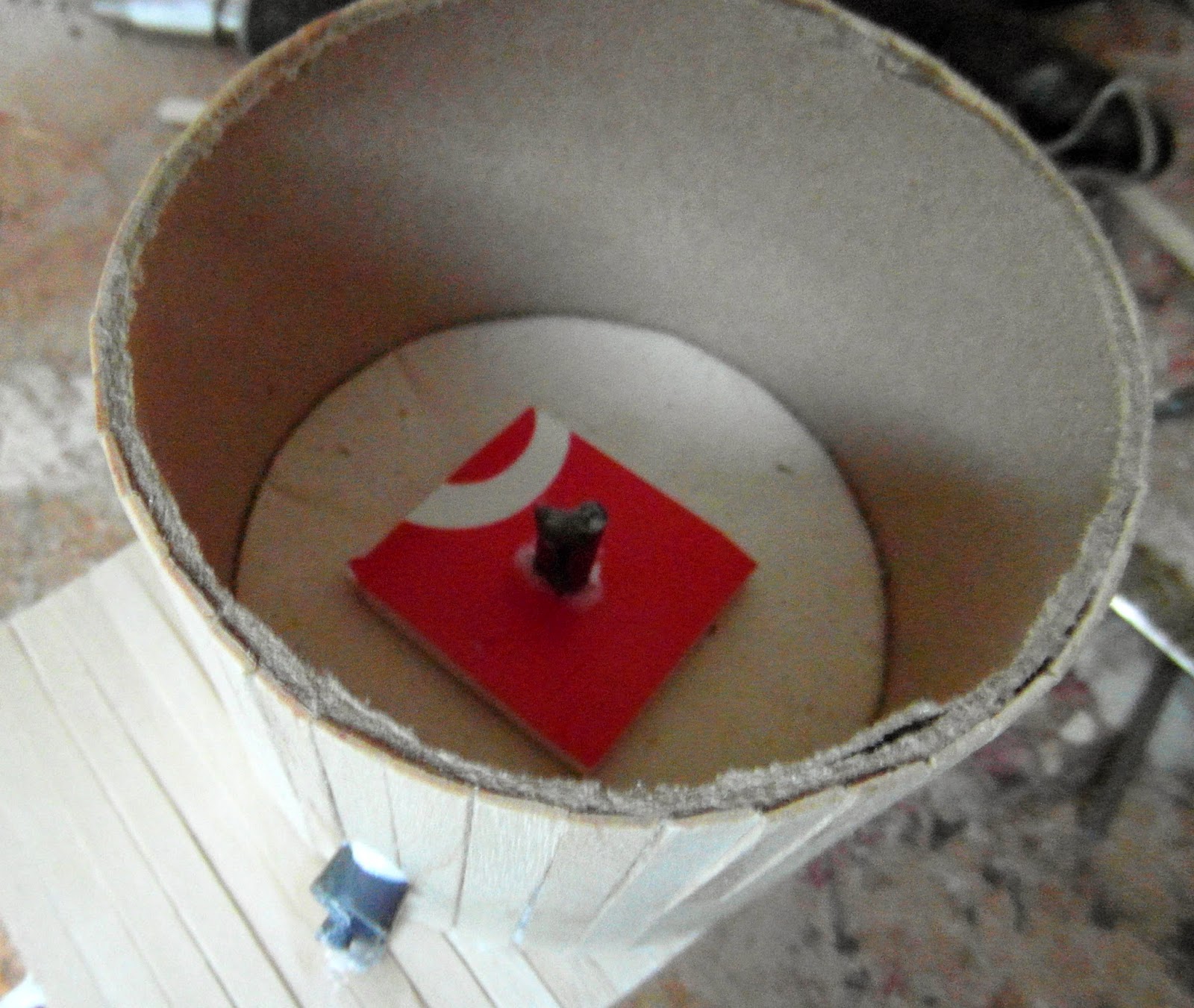 A hole was made in the rough centre of the tower and a corresponding one in the platform below the two pieces of sprue selected for the pipes were glued into a piece of foamboard that was in turn glued to the inside of the tower as can be seen in the photographs. 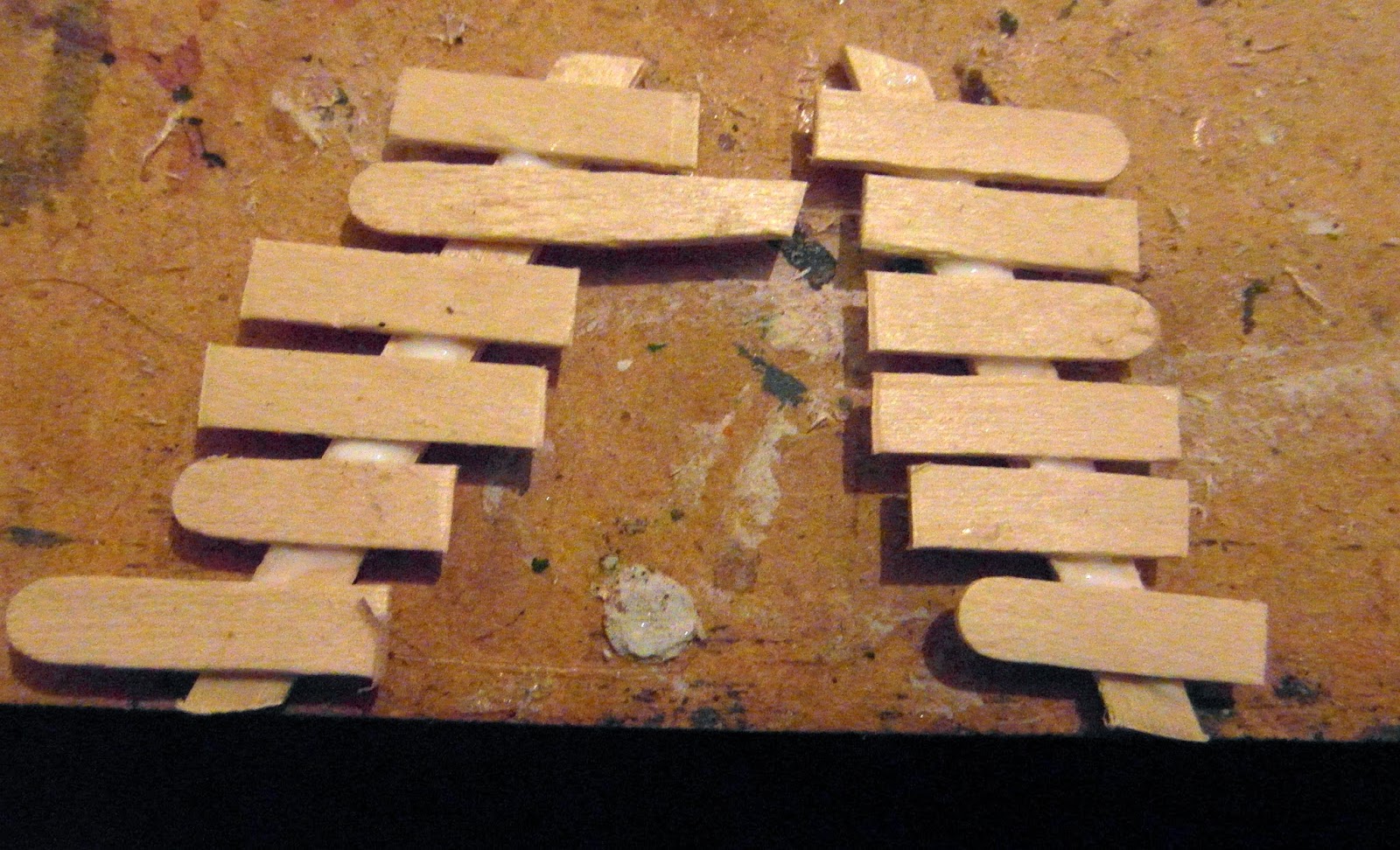 I needed some sort of access to the platform, so I made a quick set of stairs, using some of the offcuts from the various bits of stirrers I had lying about. 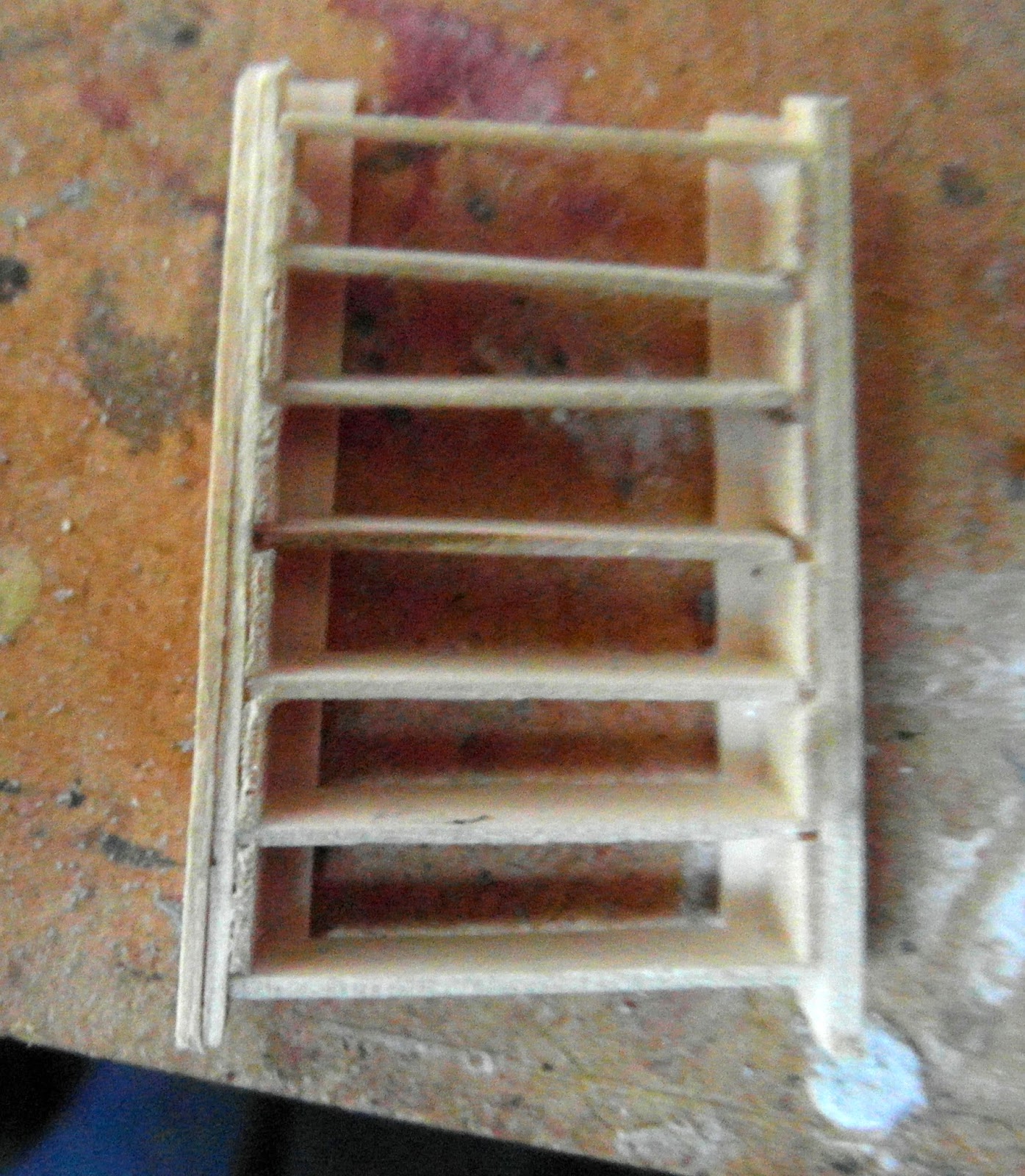 With seven or so steps cut to width as accurately as possible I assembled the whole into something passable as a staircase.
I also added two backing strips to the assembly, which not only gave it extra strength but also made for a better join when it was added to the platform. 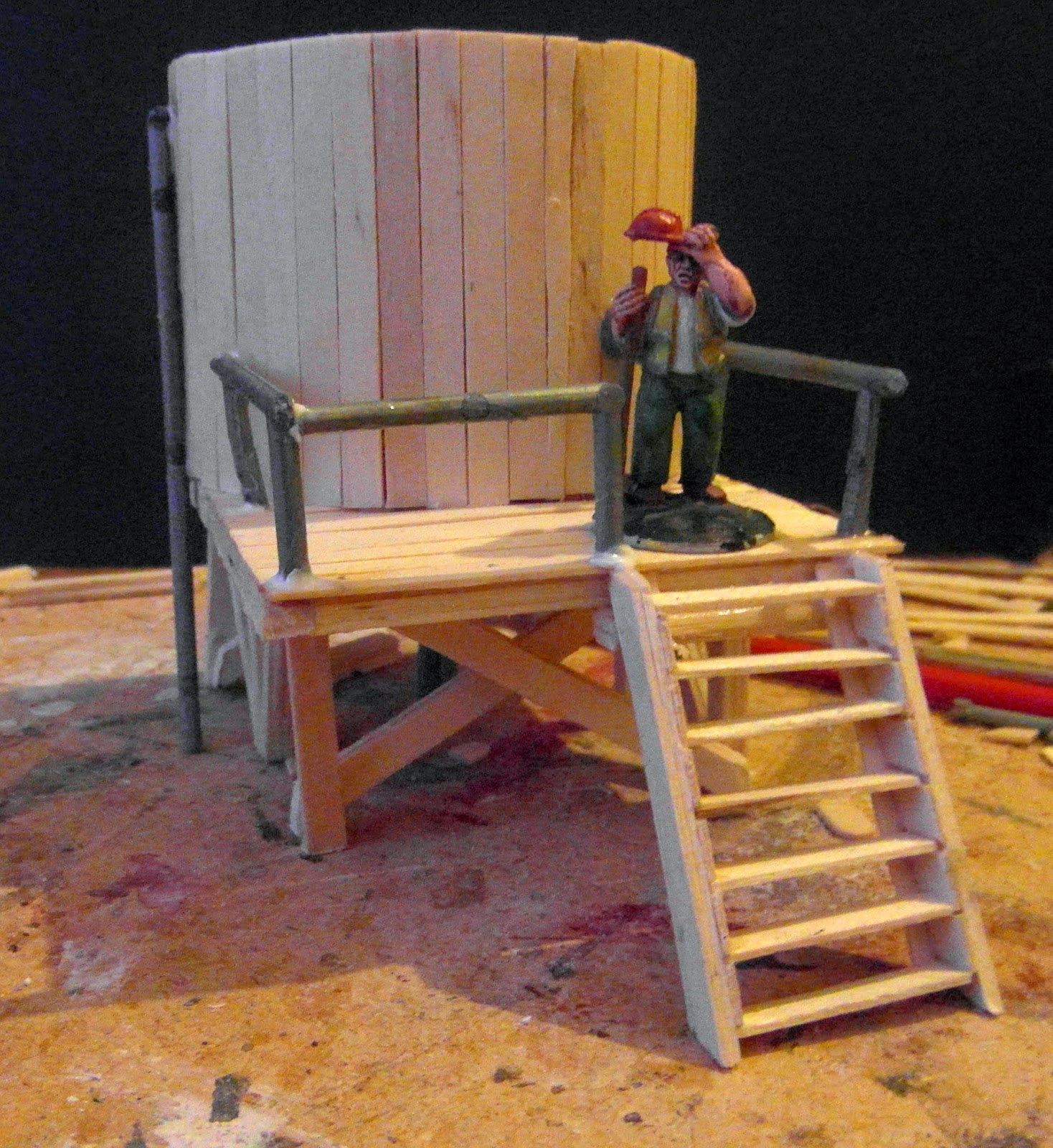 With the stairs in place I next added some sprue railing to platform; you can see that one of the legs was very crooked, but I had run out of suitable bits by this time and I just left it as a 'feature'.
Next I turned my attention to some detailing and the all important roof.
For detailing, I added three bands of card to the base, top and the approximate centre of the tower. 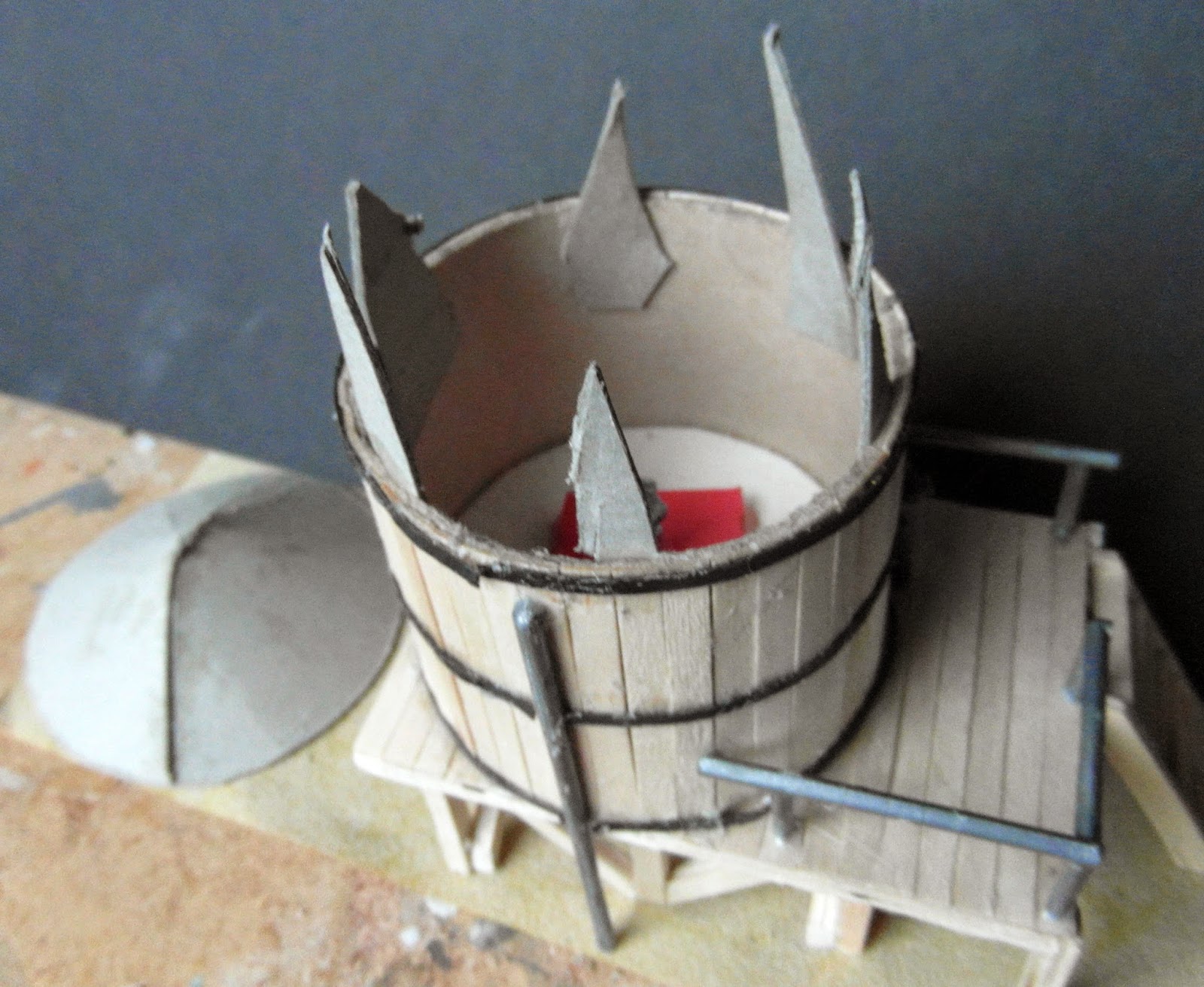 For the roof it would be a cone, made from a circle of card cut from the back of note-pad (it's soft, thick and pliable, so very suitable for this purpose. I used a paint-tin fro the circle template of the cone, found the centre of it and cut larger and larger segments until I got a height of roof I was happy with and I also trimmed about 5mm from the circumference.
On the inside of the tower I glued bits of scrap then curved them slightly inward, these would act as supports for the roof, rather than just relying on the edge of the tower. 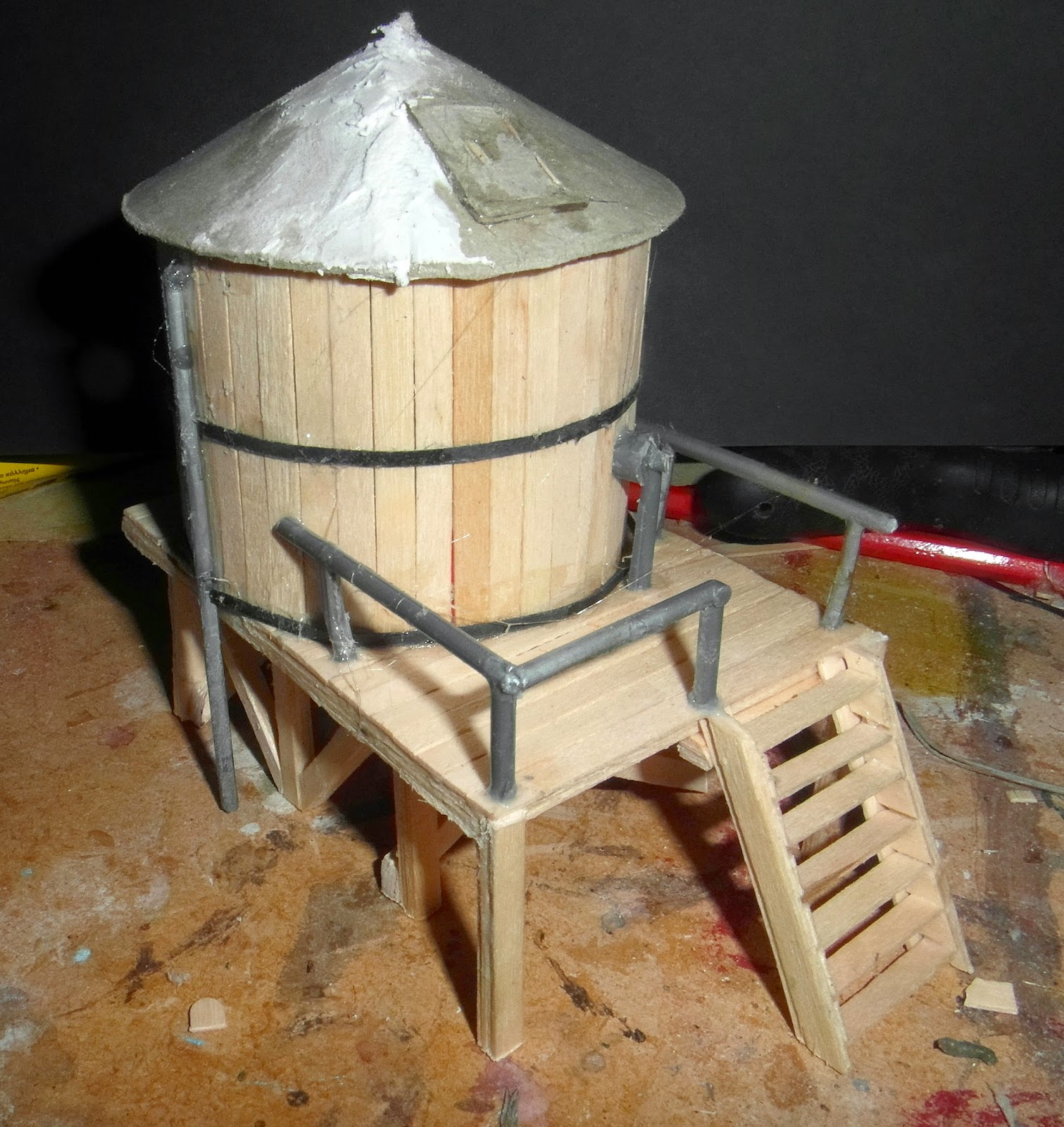 With the roof in place, I added a hatch from scrap card and painted it silver but goodness knows why as I was going to spray undercoat the whole thing anyway.
As mentioned previously I added the two extra 'front' legs; for some reason I didn't think the overhanging bit where a figure could be stood looked right - go figure.
With the front legs being the last actual modelling to be done was finished and it was then on to undercoating and painting.
I used various browns, reds, blacks etc to get the overall effect I was looking for and whilst it may not win any prizes, I'm happy enough with it.
Dimensions are Platform 4"x3" and 1.5" tall.
Tower 3" diameter, 2" to eve of roof and 3" to apex. 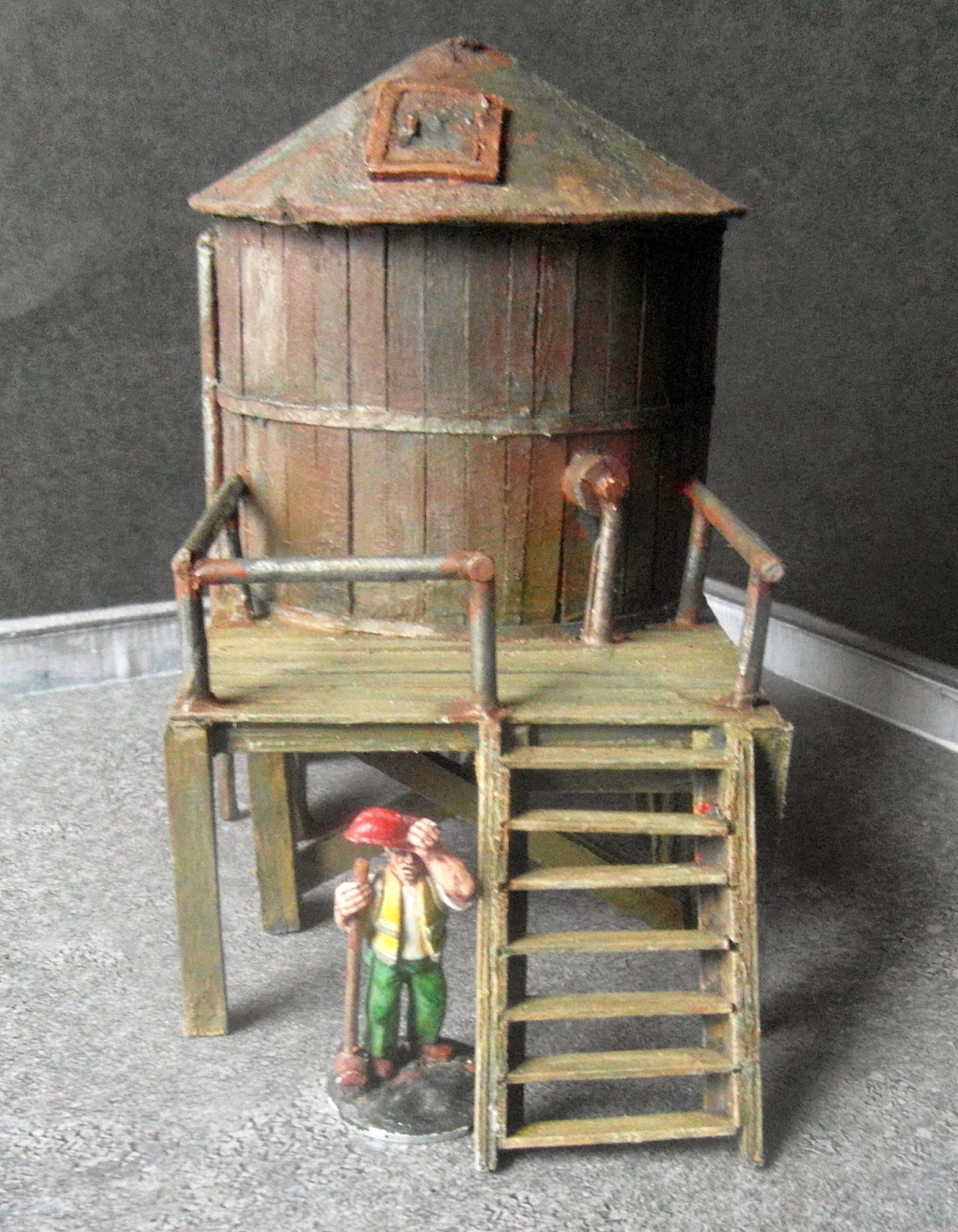 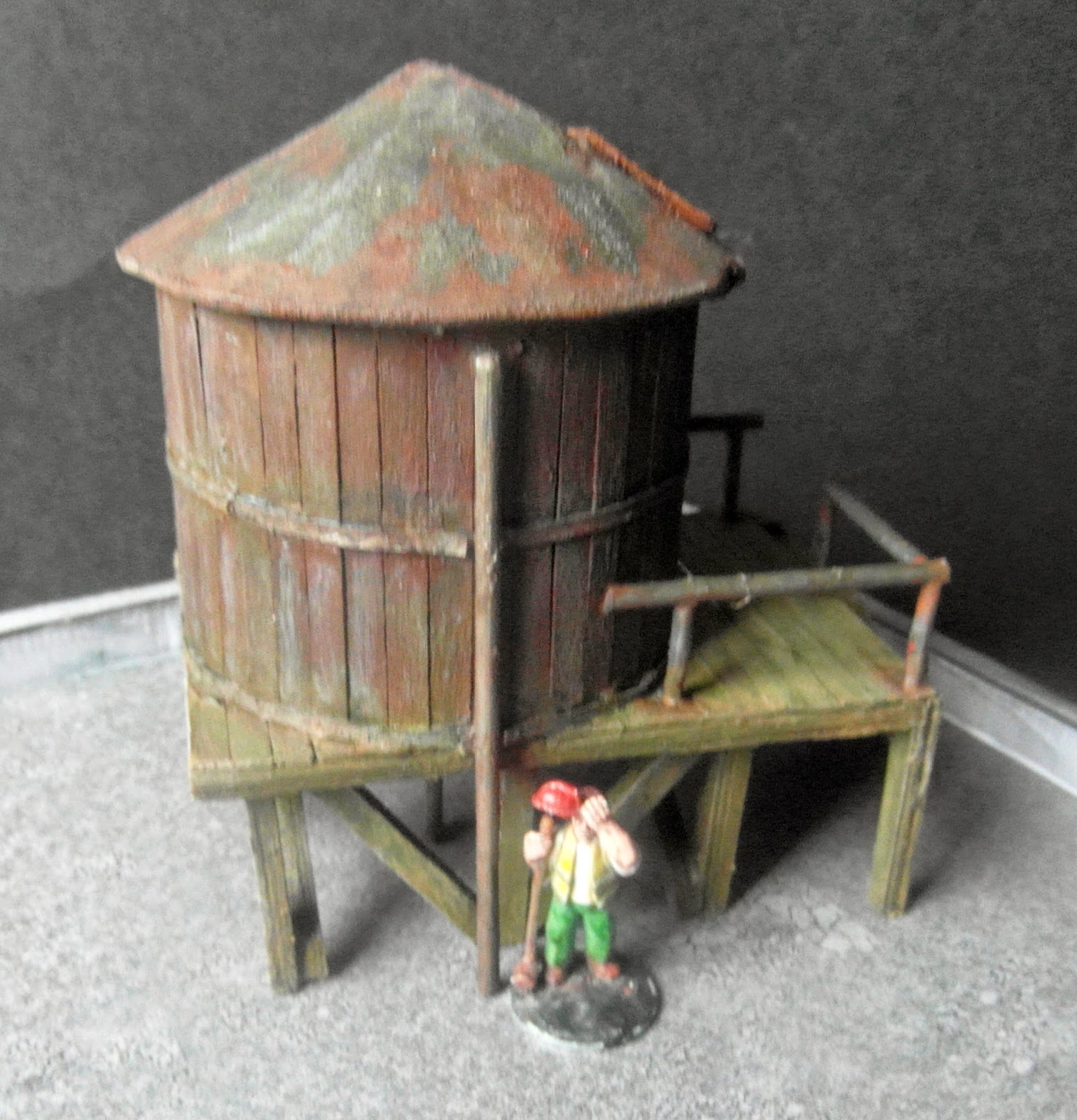 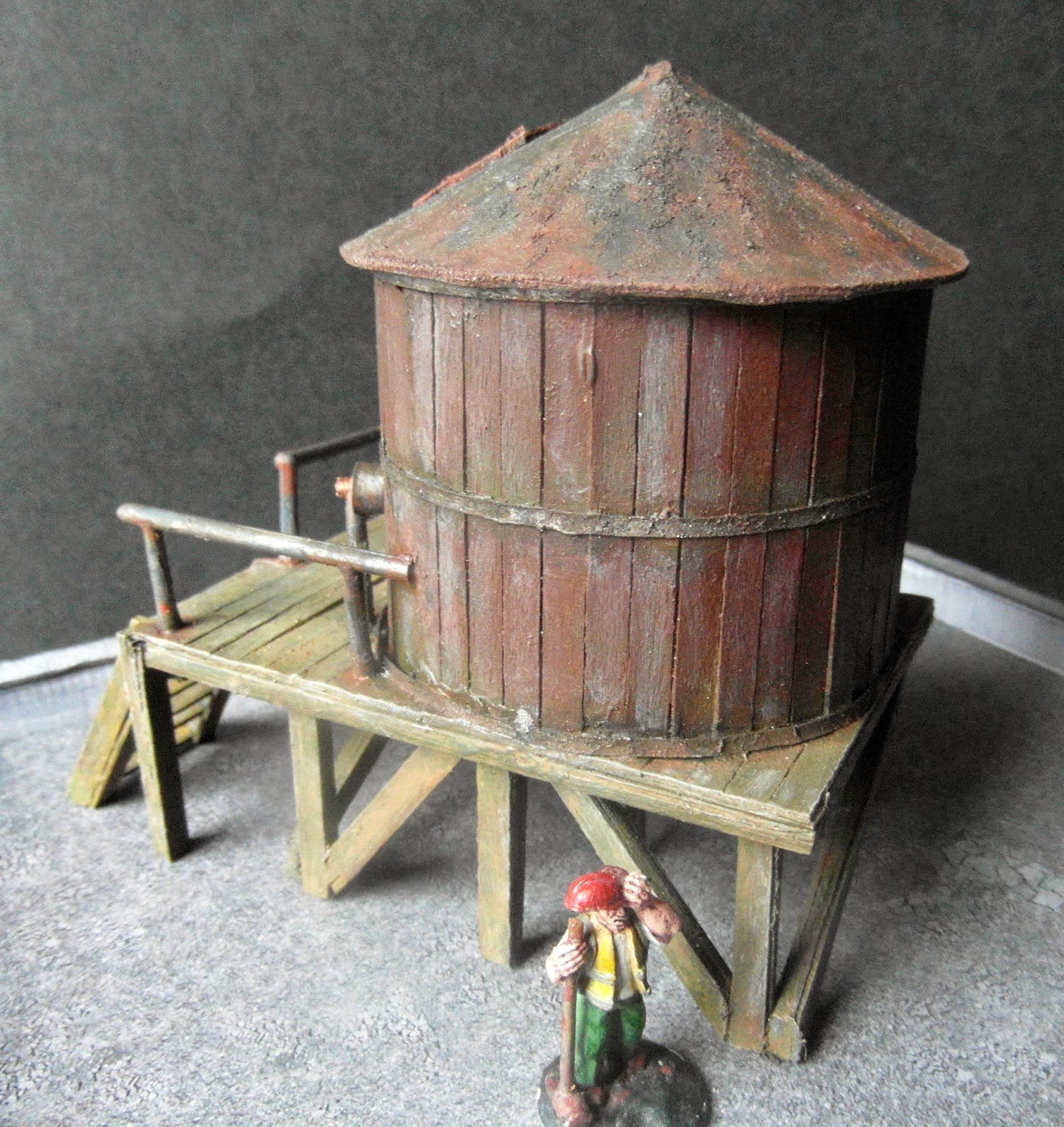 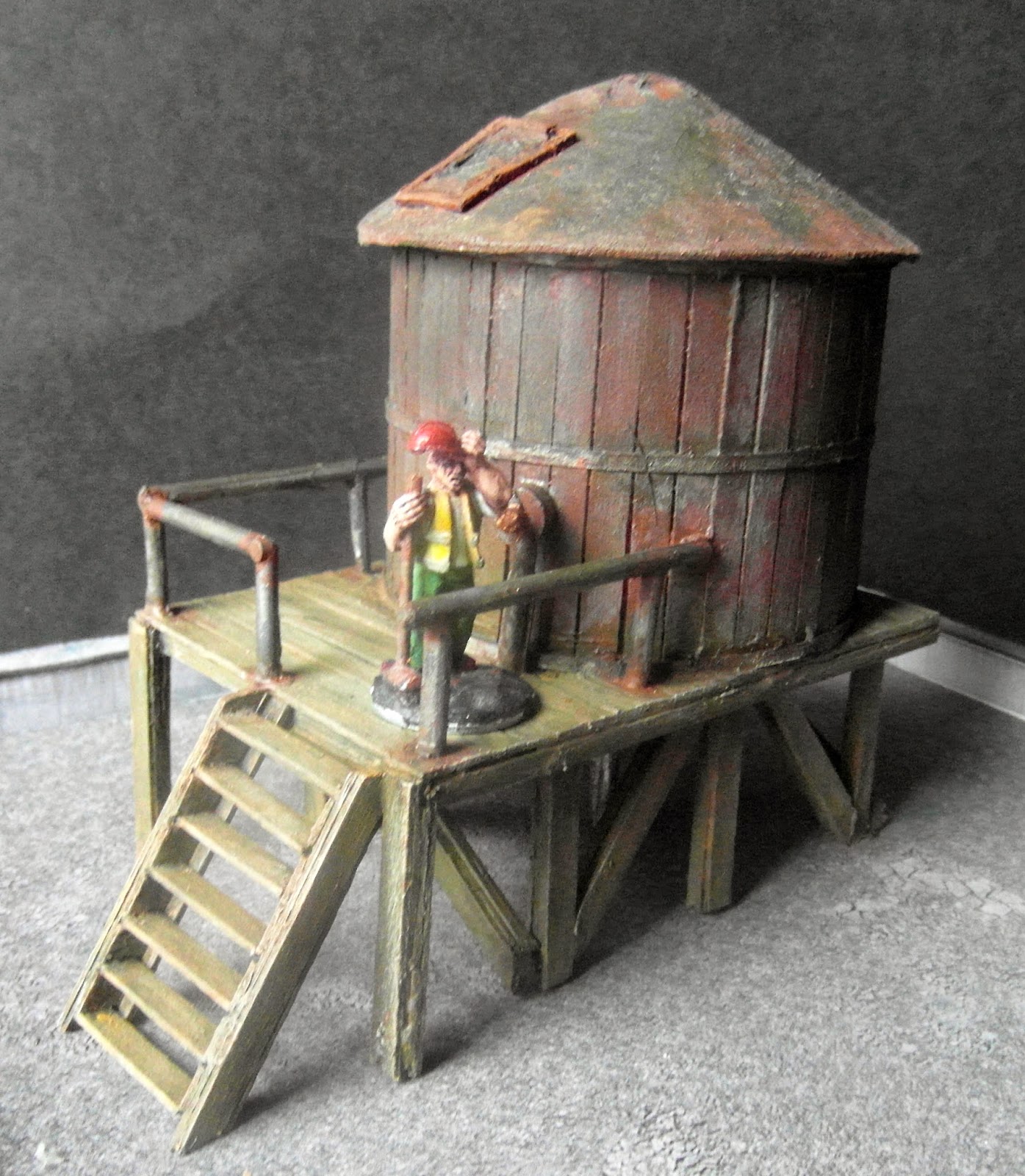 So there it is then a water tower, the sort of thing I imagine on the roof-tops of many a US building. Both fat-Dragon and WorkdWorksGanes have tower amongst their models and I did take some inspiration from them.  My best calculation is that I used 90 coffee stirrers for this build (about 20p's worth) and maybe 50p's worth of glue all the other materials being scrap. Together with paint this probably cost in the region of £1 to make but it did take a fair bit of time. I'd started it in early December and did a little each day, completely finishing it well before Xmas day.

I'd like to welcome my latest follower the author Todd Brown of the excellent "Dead" series of books, and others, but more of that next week.
That's in then for this week except to say that as always that your comments are both welcomed and appreciated.