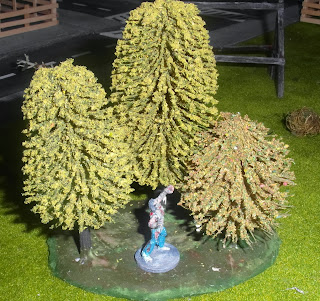 The demise of our local "Model Zone" shop saw my eldest son buying up trees, more than he could use so I ended up being the beneficiary of one bag of trees, with somewhere around 18 trees in it.

The trees themselves lay dormant in their bag for a few months before I finally got around to seeing what I could do with them.

My original intent was to use a couple of them in the park that I built, but as those of you who saw the finished park that idea had gone out of the window. 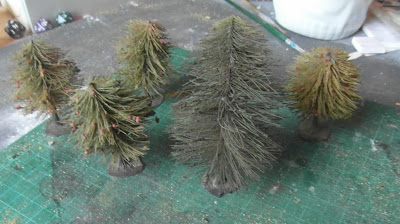 I decided to dig out my old trees and base them up with the new ones I'd acquired from my son.
The few, still "usable" trees that I dug out were in a very sorry state as can be seen by the photograph on the left. It's no wonder the state that they were in considering that they're probably over thirty years old and have been through many, many tabletop battles. 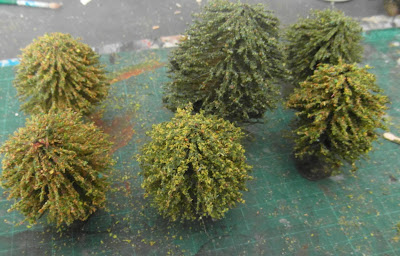 I did think that they were salvageable though and with a generous amount of PVA glue and flock (some of which came from the bag the new trees occupied) I think I made a reasonable job of rescuing them from obscurity.
The result of my efforts can be seen in the photograph on the right. The flock I used is probably just about as old as the trees and is a mix of home-made and commercial (I think). 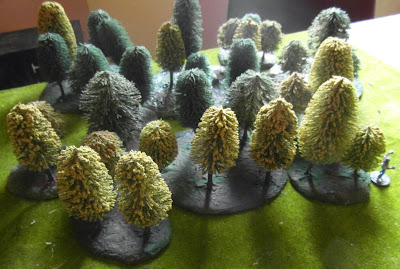 It only remained for the new trees to be mounted on irregular shapes bases of differing sizes and the refurbished old ones to be interspersed amongst them.
I mounted all the trees in multiples of two, three or more trees; the bases were chamferred and given a coating of wall filler for texture and painted in greens and browns.
The final outcome wasn't as shabby as I thought it would turn out and the 'rescued' trees fitted in well enough for me. (The tree on the right in the first photo is one.)

Although the whole process took quite a while and I was plagued with problems over getting the models and paint to stick to the bases (goodness knows why), I'm quite happy with the result

That's it for another week and as always your comments are both welcomed and appreciated.