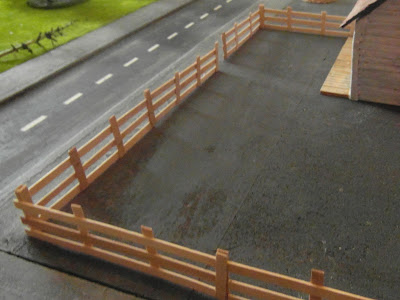 For my next scenario, set in the suburbs of Perdition I required some extra scenery as most of my stuff so far has been of an urban nature.
So whilst working on my park I was also working on some bits of scenery too. Although the fences are probably more suited to a rural environment than a suburban one, they're still another addition to my scenery.
The obvious choice (to me at least) as the preferred material to make these with was of course coffee stirrers. 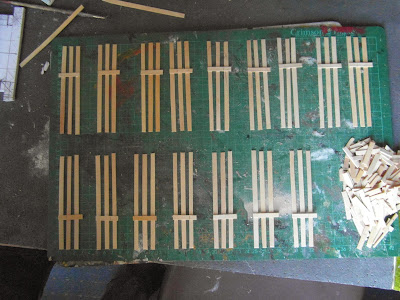 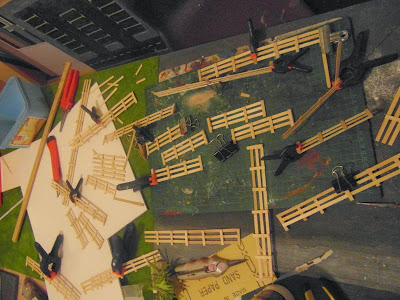 For the initial preparatory stages I cut coffee stirrers to a length of about 120mm and then laid them out as shown.
They're about 25mm from the bottom of once fence plank to the top of the third,
The pile of "posts" that can be seen to the side are 30mm long.
One central post was glued in place initially to easy handling before the second was put in place.
To join two lengths of fencing together another post was glued between the two fence pieces.
As can be seen on the photograph to the right I used a lot of clips/clamps to hold the pieces together whilst they were gluing.
To reinforce the join, a second 'post' was glued to the other side of the fence, this can be most clearly seen in the photograph at the top of the page (in the middle centre).
Some of you will no doubt have noticed that there appear to be a lot more fences in the third photo than those laid out in the second one. Five fence lengths makes about 60 cm (about 2 foot of fencing) 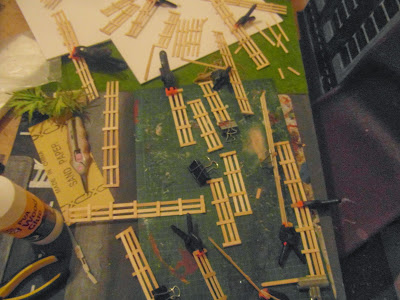 and my initial estimates of what I'd like were woefully inadequate so I ended up making about about three times more than I initially thought I would.
The photo on the left shows the second 'batch' of fences getting to the same stage as the first.
At what would be the corners of my fences I glued a post made up of four of the post length that I'd cut earlier. This gave me a good surface area to glue one length to another with some purchase and it also made the fences free standing . 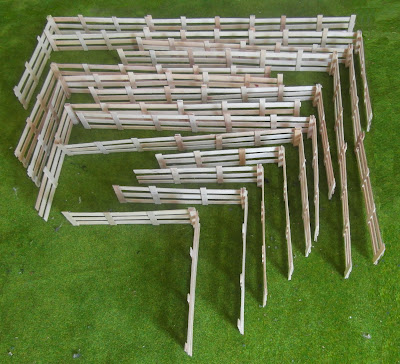 The various lengths were glued into 'L' shapes; the smallest 'L' shape was 1 length by 1 length (1x1). I made others of 2 x 1 lengths, 2 x 2 lengths and 3x1 lengths. The pieces with a single length at the corners were made in two versions, a left hand one and a right hand one.
The photograph shows the finished models in their unpainted state. I still haven't got around to painting any of them as my enthusiasm for this particular project diminished rapidly as I thought it would be quite a quick and easy process - how wrong I was ! 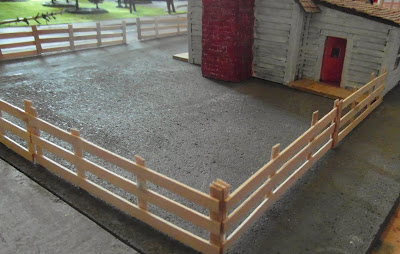 I had made just over 40 lengths of fences which, including the corner posts and fence joins used up about 200 coffee stirrers!
This gave me a total fence length of about 16 to 17 foot of fencing (about 500cm) but still seemed inadequate when I came to use them on 6 foot by 4 foot of my table. 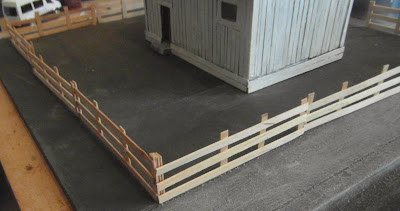 The use of the free-standing fences should be fairly obvious from the last two photographs and the varying lengths used against buildings does provide a good representation of a perimeter.
I have found though that  really should have made some provision for some gates in the overall scheme of things.
Instead of gates I've had to leave a gap in the fence lines as a temporary measure and by trying to use a free-standing fence I'm unable to make a simple straight length of fence, which is a bit frustrating.
This was one of those projects that I thought was a good idea at the time but I do wish I'd thought it through a lot more before starting out on it, but on the plus side I do have some extra terrain even if it is limited a bit in its use.

And that's it for this week, except of course to welcome  my latest follower "Alexis Gayaud" and to say that all your comments, as always, are both welcomed and appreciated.
Posted by Zabadak at 07:23