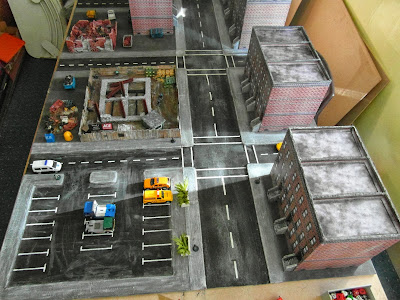 Having finished the construction site and with my room tidied up enough to have a game it was time to try out my rules and their amendments yet again.
The scenario would be a follow on from the scenario When Jimmy met Millie way back in May/June this year. 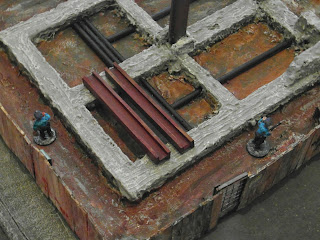 To that end the scenario would be the ambulance racing to the hospital with the now stirring Ivor Adams (who becomes a zombie). The most important amendment to my previous thought on the rules was  the "What do we do now Butch rule ?". This gives any player controlled force a chance to stand and do nothing (more akin to the original ATZ rules, but not as harsh). I still feel it absurd that a general non-player group (the general mass of civilians in this case), having nothing to do with the action at hand would stop for no apparent reason, but accept that indecision happens. So, if a player led force leader throws a one for initiative then the force is indecisive and does nothing that turn.
The main characters in this scenario, were Russell Francis and Lee Raymonds, two security guards at the construction site. Both had all their characteristics (Initiative, Leadership, Shooting Melee and Driving) set at (3) and both considered themselves the leader !
The security guards are each armed with a nightstick and pistol, with no reloads, but there is a shotgun in their site hut.
The only other player controlled character is the  ambulance driver whose characteristics are also all (3), except in driving (4), although his partner did have a (4) for initiative in the previous scenario.
The ambulance enters the table on the road shown above at a speed of 4, giving it 4 x 6" of movement plus and optional +1d6". It is making its way to the top of the table and will turn left at the first junction.
To keep the game simple none of the player controlled characters had attributes.
Dice were then thrown for the supporting cast:
The seven sections of road were diced for to see if any civilians were still roaming the streets despite the warnings, but even with a half a chance for each section only three civilians were initially present. (1,2,3 - no civilians 4,5 -one civilian, 6 - two civilians)
There was also a third of a chance of a single vehicle in each section of road, but again  people were heeding the advice to stay off the roads and only a single solitary vehicle was present as the game started. The civilian vehicles all initially travel at a speed of 2 (12").
Further civilians and vehicles had slightly reduced chances of entering the fray.
In order to make this scenario viable I had played a couple of preparatory turns to set the scene for the on table action. So at the start of turn 1 for this game, the now zombified Ivor, in the back of the ambulance has already attacked and defeated the paramedic. As the ambulance enters the table the "feast" had also concluded. The remaining crew member, the driver, is currently unaware of the situation.

So having set the situation up to hopefully wet your appetites, I'm leaving the actual action until next week's blog.


In other news:
This month has once more been declared Zomtober, with the intention that the challenge is to paint a zombie (or survivor) each week. Unfortunately unless I manage to get new reading implements by the end of the month (currently unlikely) I'll not be partaking, good luck to those that are though.
I also received a parcel this week, from a fellow blog in the post containing many "wonderful things" as Howard Carter would have said. Modesty forbids me telling you who my Great Dane benefactor is but it was gratefully accepted and once fully inspected I'll be pondering over the many uses I'll be making from the contents.

Before closing let me welcome my two latest followers "Maj. Diz Aster" and "End is nigh" and as always your comments are both welcomed and appreciated.