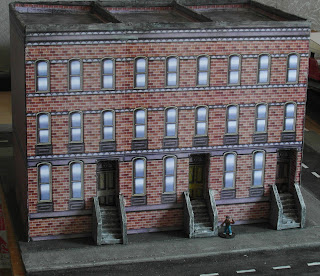 As I've not accomplished much in the last week, here's something I made earlier (as they say)
Nothing new I'm afraid as I made two very similar models way back at the beginning of March ("Flats"). The two buildings I made then were two single buildings basically butted onto one another to make a larger terrace.
In this instance I've put three frontages together to make a single model.
There is no internal detail to these models as they've been made to bulk out a city. They also suffer from being very small; with only a 4.5" frontage it would be very difficult to get sufficient internal detail inside and still have enough room for figures. 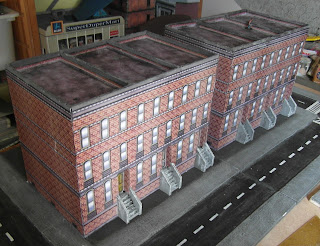 The second photograph shows a second triple frontage terrace alongside the first.
As with the first pair of double frontage buildings these were fairly tedious to make. The building weren't designed to be made with  5mm foamboard, as these are and it does make it more difficult to make these (especially the roof parapets).
As with the first two models I've dispensed with the card stair and scratch-built my own from foamboard exactly like the originals. 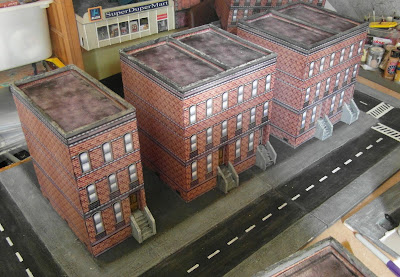 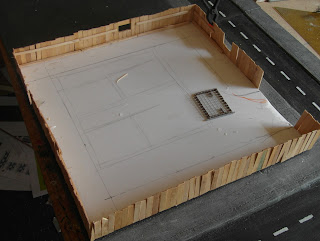 I would have shown all the models together on a single set-up had it not been for the fact that most of my table is cluttered with things from my current project.
This photo shows what I have managed to achieve in the last week despite the after op effects of my eye surgery (soon to be resolved  - hopefully !)
It's the start of what will be a construction site.
The base is about 16 inches square which, as can  be seen fits nicely into one of my terrain boards.
Whilst the base is plastic, the perimeter fence is 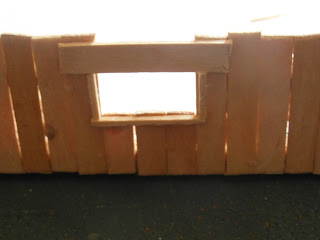 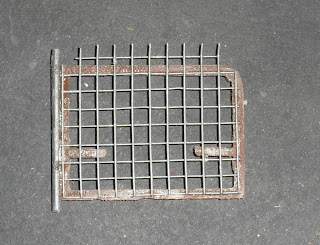 lolly pop sticks, which I've used before in other projects. I've cut each stick in half to make two "planks" each about 40mm high. They've been glued to the edge of the base and to one another's edges. You can see from the photographs that this is not an exact fit by any means. As the sticks were difficult to hold in place whilst the glue dried (PVA) I was only gluing about a third of a side at a time. Barely noticeable on the photos is the supporting internal beam at the base of the fencing (coffee stirrers), and the beam about 30mm up the fence. As for detail, I've made provision for two public viewing windows the one shown has had a matchstick frame added to the external (public) side, I may well add an internal mesh to it as an extra feature.
The main gate to the site I've made from two pieces of sprue, one from the fence sprue I got with the farmhouse (the brown one) and the other from some EM4 plastics minis, whilst the mesh came from my Wilkinsons Bird feeder
The gate will be openable using hinge posts (the silver sprue).


And that's it for this week

It remains for me to welcome my latest follower "Kasper" and to wonder which of my erstwhile followers has departed and why.