So today I'm  doing a very poor impression of Zabadak the Grey pirate scourge of the seven seas. 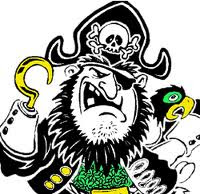 Okay, I know it's also a pathetic title for this week's blog.
Today I was treated to eye surgery (again) in our local Infirmary which to all intents and purposes went well as far as I can see (which isn't very far currently).
I have to wait until mid September for my follow appointment and then probably another fortnight before I get new Spectacles, from then on I shall be trying to tackle my back-log of figure painting (not that anyone would notice the difference I reckon) 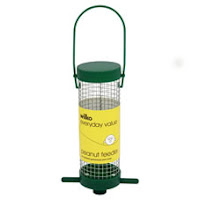 I recently went on a spending spree to my favourite shop (Poundland )and along with all the tubes of UHU glue that I normally buy I made two purchases that may be of interest.
The first, shown on the left, was actually purchased from Wilkinsons for the princely sum of £1.50, I;ve already taken it apart as it was bought solely for the wire mesh.
The mesh is currently under investigation as a source for making furniture from (chairs initially), an idea passed on to me by one of my followers via a You-tube link) 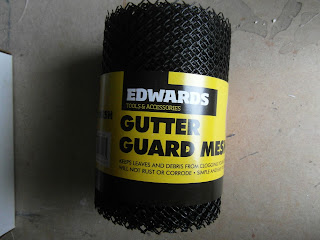 The second purchase (which was from Poundland) is shown here on the right.
As can be seen, it's a roll of mesh, though in this time it's plastic.
The intention is to use it for fencing, even though the "holes" in the mesh are a bit on the large side at about a centimetre square.
The roll is 5metres long though and 16cm wide wish is a heck of a lot of mesh for a pound !
It has an advantage from my perspective in that the mesh is diagonal to the length - I've always been a bit on the skeptic side of square mesh for fencing. I bought a sheet of mesh a while ago and cut it to size but it's been a nightmare trying to get it to glue to anything, hopefully I'll have more success this time round with this stuff.
I've also managed to just about finish off the buildings that I hinted at two weeks ago and they'll probably end up being the subject of next week's blog.

Finally let me give you an update on my friend (and probably most of your's) Bryan/Vampifan who you will undoubtedly know by now is currently hospitalised (I blame his wanton life-style).
Suffice to say here that's he's doing fine and I've managed to visit him twice in the last week. On my second visit he looked a lot better than he had the previous visit and is making good recovery.
I have of course passed on all the many messages he received on his last blog.
For a further, fuller account of my visits to Bryan I've posted on The Board of the Living Lead in the News Section; the link for that site can be found on the right of this page.

That's it for this week, as always your comments are both welcomed and appreciated.