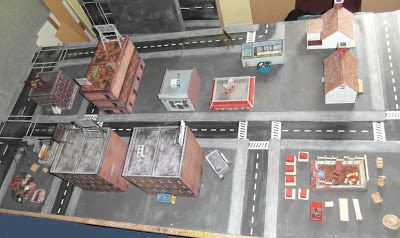 I'm sure I've heard or seen the term "Cityscape" used in some other context but be assured that this  merely refers to me showing the other buildings that weren't shown last week.

Here's a general view of the table layout in much the same form as last week's blog but I've taken off two of the wider road boards and they've been replaced with the narrower roads I made originally. 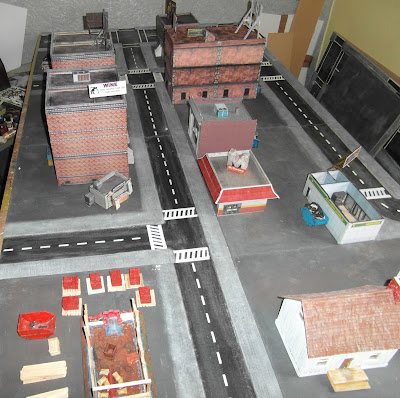 Here's another view of the same layout; the more astute amongst you will see that my convenience store has lost its roof.
I blame this on moving stuff I made sometime last year from one room to another
There's not much really to say about the set-up but from my perspective there seems to be a lot of open space that need fences, walls and other such obstacles.
I've put out nearly all my scratch-built building materials in one corner, just to fill the space, but I do have plans to make a proper construction site.


Here's another view showing the layout and you can see that the cottages in the bottom corner are crying out for fencing around them to afford them some privacy. 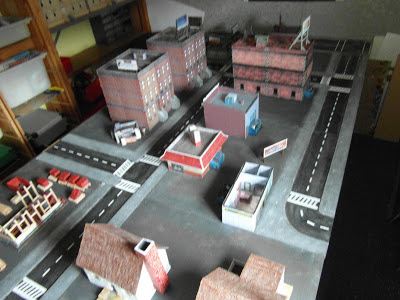 I had forgotten to place another building that I've yet to show, the original one that kicked this all off - A Sarrissa "Cityblock Residential", but it's still in the stages of being finished off.
I've decide that I'll be playing most of my games using only three-quarters or a half of the table as this will allow me be able to have a moving terrain - as the characters advance up the table, then I'll be able to take terrain boards off one end and replace them at the other end. I only have a limited number of terrain boards and using fewer of them at a time will enable me to have greater variations in the terrain.

Following on from last week's wide roads I re-arranged the above board, replacing my curved one with another to come up with this arrangement. 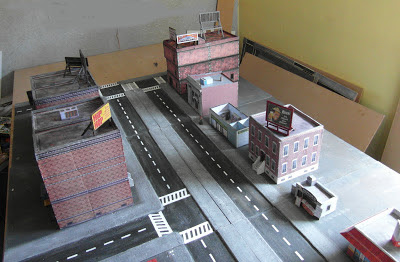 As can be seen there is a central boulevard which could have traffic going in opposite directions each side of the central reservation, though the central reservation does need some flower beds, trees or similar to break up its grey monotony.
The tenements were made with this size road in mind as it gives a lot more space around the back using the narrower roads rather than the wider ones. You can also see that I've only used three-quarters of the table, having removed the wide road terrain board leaving a two foot space at the top of the picture.The boards will be pushed up a foot when playing, leaving a foot at each end for  rules, dice, tea mugs and all the other crap that normally clutters the playing area and which I hate.

And that's it for another week. Next week I'll hopefully be showing the layout for my first game and revealing  the setting for my campaign (the city name, characters etc.).

Finally let me welcome my three latest followers, "Danisnotatree", "Mac" and "Gimzod" I hope you all find something here to interest you.

As always all your comments are both welcomed and appreciated.