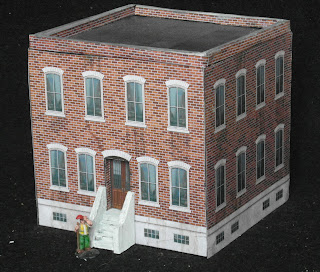 I've been continuing my efforts to pad out my table with buildings in a push to get some gaming done. Here are a couple more of my latest efforts.
First up is this building from Fat Dragon Games.
You can see that I've made a complete pig's breakfast of the roof (which doesn't lift off)
The model itself is really nothing remarkable as it only consists of the front and three identical sides.
The "stairs" included in the model were actually 2D and were thus flush with the front !Following on from my tenements' stairs I scratch built the front stairs for this building almost identically to those. 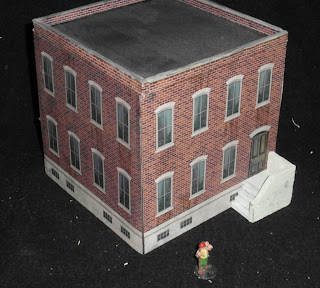 As the front door was flush with the sides of the building I indented it using a duplicate sheet.
The rear of the building initially was identical to the sides and would have made for an even more boring building than it already was.
One spare doorway later and I had a back door..
I added stairs again scratch built from foamcard and angled them  for variety (and it also provides for a very nice shooting position too). 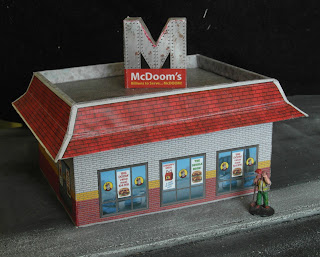 My  next effort was actually the first of my various flats to be completed but it had many complications along the way.
Again, this a Fat Dragon model of their McDoom's burger joint. The sign on the roof is meant to be on a post somewhere in the parking lot, but I haven't finally decided what exactly I'll be calling this place yet.
The roof was quite tricky to build but I put that down to my card-fu skills. Like all the flat-type models I've made, the walls are foamcard, as are the roof surrounds, but because of the anlged slopes on this model's roof I reinforced these with  card, being much easier to work with in this particular case, 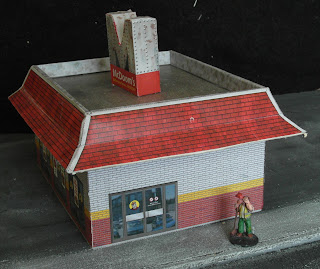 This next view shows the entrance on the short side of the building , which I didn't like that much.
I'd originally intended to have some form of interior to this model but the sheets I'd prepared to put on the inside printed out the wrong size  (twice) so once more I was beaten by technology and the interior is blank.
Unlike my other flats this one actually does have a floor inside though, so I can actually detail it at some later stage but I doubt it'll happen. 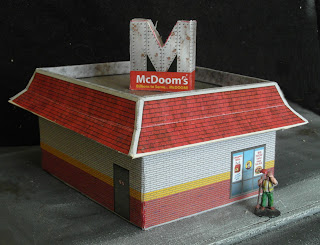 The final picture shows the rear and the last side of the building and once more nothing remarkable.
In the original model there is provision to have a few variations in colours, windows etc and there is also a side counter for the drive-through aspect  though I haven't made that feature for this model.
The model's dimensions are about 17cm x 14cm x10cm high.

In other news, this is the last of my current batch of "flats" and next week I'll be showing the billboards that I've been producing. I've built eight so far and have painted up four of those to what to me is a satisfactory standard. In addition the board that McDoom's sits on in the photographs above is the latest addition to my terrain boards. It's another standard 60cm x 60cm board with a single straight section of wide road on it (20cm), so nothing really new.

As always, comments are both welcomed and appreciated.
Posted by Zabadak at 08:53