Whilst waiting for things like glue to set and models to dry out I tend to tinker around with bits and pieces and over the last few weeks I've been putting together some billboards for my "city".
They're all more or less made the same way other than this first one.
This particular billboard is the largest of the twelve I've managed to finish, it stands about 6 inches high and the "base" measures about 6 inches  deep by 5 inches wide. (~  15cm x12.5cm x 15cm - hwd).
Because of its height there is a gantry just below the sign (you can see Sid standing on it in the photograph.) - these would  probably have lighting etc on them but would be a pain to make and serve little purpose in a game. There may even be  an access ladder integral to the structure but again I've left this out and couldn't spot one anyway on those I've looked at. 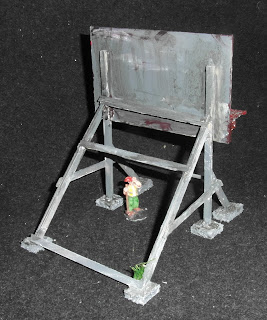 This is also the only billboard I've made that has the "pads" on the supports. The pads are meant to represent concrete foundations for the whole thing and are made from scraps of foamboard gunked up.
The poster sits on a piece of card and the gantry is a piece of plastic canvas that I've shown used for quite a few things previously.
All the supports, crossbeams and so on are made from coffee stirrers.
All the uprights and angled "legs" are a bit more substantial and are four coffee stirrers glued together.
The coffee stirrers I use are a bit on the flimsy side and tend to warp a little when glue is applied to them so I clamp them together whilst the glue dries (PVA) . Bulldog clips and some cheap plastic clamps do the trick nicely.
The four-layer stirrers are a bit to thick to cut, even with a heavy-duty craft knife, so I use a razor saw instead. 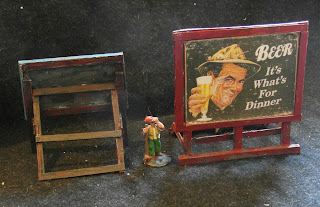 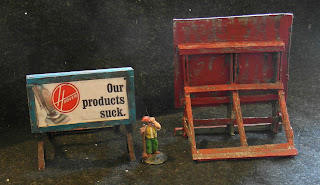 The two photographs above  show the obverse and reverse of the same two billboards. Bo are constructed in a similar fashion from stirrers. The "Beer" billboard was one of the first that I
started and I had many problems with it, but these were overcome as my design of these improved.
Both of these models would be equally at home on buildings or on the side of a road, especially the smaller one. 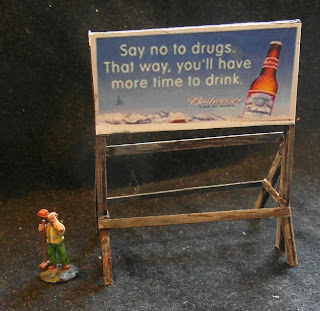 This is another one of the larger billboards and follows the same design as those above, except for the extra small supporting legs sticking out of the front main uprights.  Without this extra support the models are very prone to falling forward, which I'm sure would be a pain in the proverbial during a game. 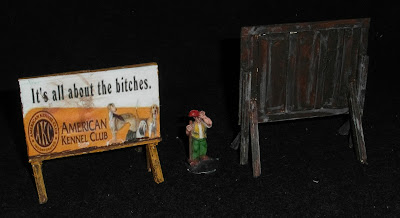 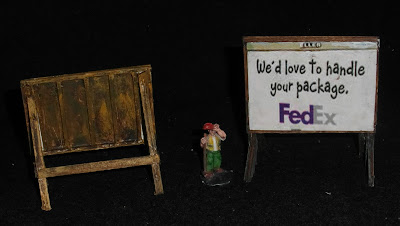 The above two are no different to the others save that I've used some matchsticks on the reverse of the boards (which you can barely make out) representing some form of support and for a bit of variety.
All the posters for my billboards came from  the Interweb and as far as I'm aware are actual photographs of billboards.

That's it for this week, next week I'll put the remaining six billboards that I've completed  on my blog, providing I can see well enough to do it as I have an eye operation this week !

It just remains for me to welcome my three latest followers, "CPBelt, Warhamster and Mistersam", so - "Welcome guys", I hope you find something here that interests you.

As always, comments are both welcomed and appreciated.
Posted by Zabadak at 09:26