I think the title says it all as I haven't really got that much to offer this week.

About this time last year, when I was contemplating setting up this blog I was surfing the interweb looking for US Police cars, Taxis and Ambulances, none of which were forthcoming (the quest goes on). I later decided to venture in the field of card modelling some vehicles, alas this project was quickly squashed after the disaster that was my first attempt at a police car, from (WWG).
I think I built the model sometime last summer.  I have got a few vehicles that are suitable for games, but I don't think I'll ever approach gridlock on my table. 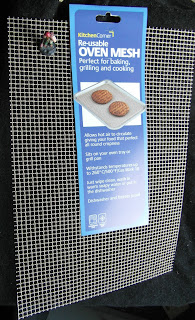 The photograph on the left shows one of my recent Poundland finds.

It's a mesh (obviously) that I'll use for many different things in making scenery.
The most obvious use is for fences, but window frames, iron grill-work and industrial flooring all spring to mind too.
Materials like this have been around for ages of course, I still have some platci canvas that I've used on all sorts of projects  over the years.
There is also the metallic stuff used in car body-work, that ttoo has been around for years and makes excellent fences, razor wire etc.
It wasn't the fact that its dishwasher and freezer-proof that attracted me to it but its size.
The mesh is about a quarter inch (6mm) but the whole sheet is far larger than a sheet of A4 paper, measuring about 14 inches x 10 inches (approx 350mm x 250mm).
It has the same flexiblity and rigidity as plastic canvas but is a lot thinner (but thicker than the metal stuff). 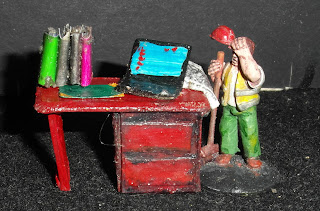 I haven't a clue as to how it glues yet, but it can easily be cut. I'll be making something out of it in the near future.
Whilst waiting for things to dry out, (mostly walls) using my new acrylics  (125ml from Poundland) I made this desk.. The whole thing took about an hour to make and paint (excluding drying time).
The leg looks a little wonky, but that's because it is. It's easily remedied as the whole thing is made from card and paper and card bends  ! 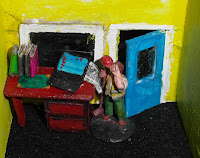 Here's where the desk will eventually end up (even if it still has a wonky leg)
There's next to no more space in the room as it will only measure 2" x 3" (approx 50mm x 75mm), which doesn't leave a lot of room to put figures in, let alone a chair and filing cabinet that I envisaged.
Putting a chair tucked in under the desk will help save some space though and rather than putt a filing cabinet in I may just add something to the walls  for decoration. 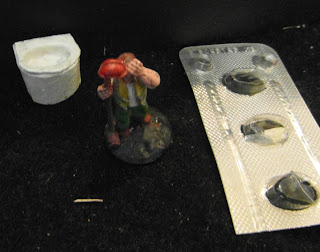 Adjacent to the office above will be the toilet (restroom. bathroom). I've already figured out half the furniture for the interior, but I wasn't happy with my last attempt at a wash-basin.
I've been eyeing various packaging with a view to using it in models.
As can been seen from the photograph, the sink unit was made from tablet packaging (I get through a lot of these things every week) and a piece of card. It's not the best stuff to work with, but it does cut easily. There a lot of different tablet package designs out there and look out for square ones that could make skylights, capsule type ones that could make bath-tubs etc. 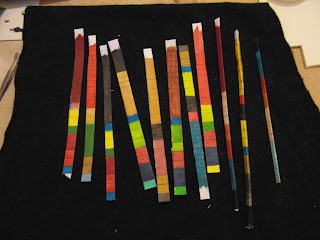 It's not just tablet packaging either, in the past  I've made domes from the tops of shampoo bottles; toothpaste caps make excellent flower pots, litter bins, waste-paper bins and so on.
The final photograph shows the next stage in a project that I started weeks ago. It started out in life as a sheet of paper to which I added a grid of rectangles. the grid was slowly filled in with paint randomly.
I've now got to the stage where I've cut the sheet vertically into strips and the three strips to the right of the photo have been folded over. On that note I'll leave you to ponder what it all about.

That's it for this week, comments as always are both welcomed and appreciated.
Posted by Zabadak at 08:01