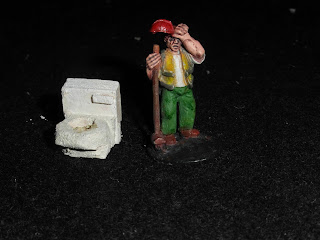 Back in October I briefly dumped this photo of Sid and my prototype toilet in another article.
Since then I have  made  a lot  more of them using more or less the same process. 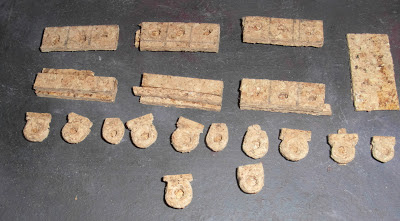 Because I was going to "mass-produce" these, I used strips of cork left over from my terrain board endeavours.
Each strip was about 300mm long and about 35mm wide (4mm-5mm thick cork).
I drew out two rows of 15mm squares for the upper parts of the toilet.
For the lower parts other scrap strips were used approximately 10mm wide, but as can be seen in the photograph this was not always the case.
An interesting bonus occurred when I came to cutt the individual top part out in that because I had an extra 5mm width to the original 15mm square I decided to retain it and use it to support a cistern. The original prototype had the cistern flush with the rear of the toilet, but this extra 5mm give me a ledge to sit a cistern on.

All the upper 15mm squares (with and without the 5mm lip) were then given a hole in the centre using a craft knife,
Once all the necessary holes were roughly cut through the bottom pieces were glued in place. 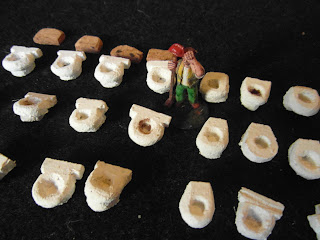 The next stage was the interminable filing of the base and the upper bowl to get some semblance of a real toilet shape. This was the most time-consuming part of the whole task, taking probably more than 5 minutes per unit.
The close up on the left shows the wide variations in style and size that I accidently acheived though I did try and make a few more or less the same.
The odd bit of cork in the top left of the photograph are the already formed cisterns, though not glued in place. 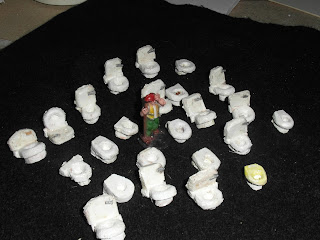 The next stage was to cut mor scraps of cork into a cistern like shape to fit on the rear of those toilets with the 5mm lip. A quick bit of filing later so that it doesn't look completely square cut and the toilet would be almost complete.

The last bit of "modelling" to do was to put a handle on those that had a cisterns .
The others would be put up against a wall with a hidden cistern as seems to be quite common nowadays and the handle for those would consequently would go on the wall. 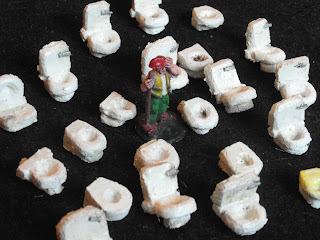 Lastly here's a close up of Sid with the finished gloss-varnished product, which it doesn't show up well in my photographs (but then again what does ?)

The uneven appearance of theses is due to the black cloth I use for backgrounds and the crap that was underneath it, plus some of the units with the cisterns on the rear were a bit unstable and tended to lean backwards. This won't matter if they rest up against a wall or are glued into position.
These of course are fairly rough, but do pass the two foot rule (I can make out what they are meant to be at arm's length) and I'm quite happy with them. An obvious improvement woould be to have an actual seat on them and that's a possiblity that I'll consider when I actually get to place them into a building. An alternative to the white porcelain bowl would be silver as used in prisons and possibly cells, though I'm no expert. As I've still got several in various stages of build, this is again something to consider for the future.

That's it for this week; as always all comments are both welcomed and appreciated