It's a bit of a fraud really calling this particular effort a cottage because although the model is finished (more or less) it isn't really a complete cottage - the image explains all I suppose.
It was worked on in between the times when work had come to a stop on my other cottages, whilst waiting for things to dry out generally.
It wasn't particularly difficult to make as I didn't really have to be that precise (and I wasn't taking it that seriously). I did get frustrated at times though fitting the  spacers for the studding type walls.
The style of the building more or less follows the same general layout as the other two cottages, with more or less the same dimensions.
I wanted to have sufficient details that it would be recognisable as a version of the other two but I also didn't want it to be too far in its development so to speak.
Many years ago I actually worked on building a holiday chalet on the South coast of England and I recalled that the chap I was working with  said that the door frames and windows frames would be fixed at a later time (they were very much off true whilst I was there)
I'm guessing that most people reading this will already be aware of the materials used (at least for all the wood bits).
The base is a scrap of plastic, the bricks are foamboard and the pipe is made from a 25mm plastic tube cut  longitudinnaly (though not parallel to the edge). The "concrete" foundation is also cut from scrap foamboard. Some wall filler (ready mixed pot from Poundland) was used for texturing the base.
All the wood bits were, of course coffee-stirrers, the uprights being several stuck together. The ramp was made from two pieces of lollypop sticks.

Whilst I could have built up the back wall to make more of a barricade as cover for any survivors to hide behind, I opted instead to leave it fairly open and make some removable barricade style elements, which could be used

for this model and for general use.- they're nothing special.
This next photograph show a bird's-eye view of the whole thing and shows both the ramp and the pipe in situ.
This view also shows how much space there is inside for figures (and if necessary barricades), which I prefer, rather than filling the inside with more detail - which is not that difficult really,  given that it's meant to be a building site. 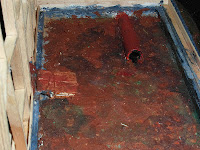 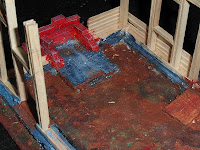 Here's a couple of views of the interior showing what little internal detail there is for each end of the building.
Both the fireplace end and the pipe end show mud and concrete splattered walls (but in reality it just shows that I'm a crap painter), they do though give a good view of the ramp and the pipe. 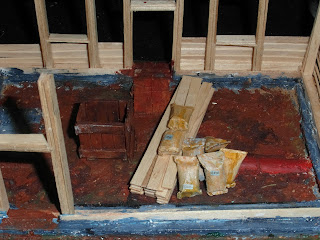 Finally here's an improvised barricade made from the various bit and pieces that I've been working on.
The sacks shown, I've featured before, though sparingly and I was so pleased with them that I've actually made a lot more and made a couple of stacks of them, which of course can be used as improvised barricade for figures. They'll feature in a later blog along with other minor stuff that I've been working on.

In other news:
Work on the cottage interiors has all but come to a dead halt as real life intervenes, but I have managed to do some other (easier) things, so all progress hasn't halted. 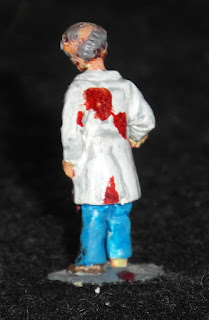 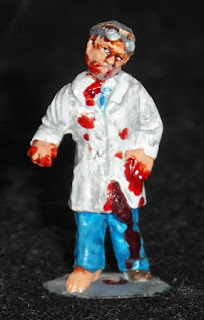 It has also been mentioned before, on many blogs that I follow and particularly amongst the Zombie Community Bloggers about the generosity of others within the community and this last week was no exception as I received a small parcel from Slovakia. For fear of embarrassing the sender I'll not mention Mattyoo's name. The parcel came on a day when I was feeling fairly ill (normal for me atm) and cheered me up no-end.
It's a great figure of Zombie-me, ready for my zombie campaign, but one I hope I don't have to use for myself !  I hope my photo's have done it justice. (Should anyone else want to send me painted figures I can provide a list and even the bare metal !)

Well, that's it for this week it only remains for me to welcome my newest follower, "Brovatar", I hope you find something here to interest you.

All comments are, as ever, welcomed and appreciated.