A Load of Rubbish 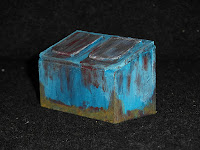 Late at night I sometimes get good ideas, but most times I get some rubbish ones.
This post is about one of the rubbish ones.
Having cover available is always  a good idea for survivors and I needed to get more things to act as cover for my games.
As a consequence of this line of thought I made four of these large rubbish bins. 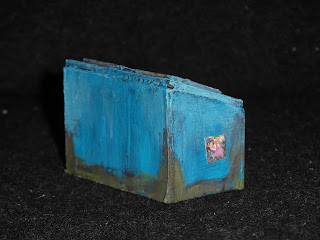 Bin number one, shown here has no major features, save for a small poster  stuck on one side.
I really should have put some stencilled lettering or some such on the bins, but frankly I didn't think it worth it.

Bin number two has a small pile of garbage dumped next to it and again is really nothing remarkable.
Sid the Sweeper shows the relative scale of the models and they're all a tad oversized, I think that they could have done with having about 5mm less height.
The wooden board beside the bin was a left-over from my lollypop crates but has had a wash of brown over it.
I'll be making some more bins in the future and whilst these bins are of the "two-lid" variety, the next ones will be smaller, with a single lid. 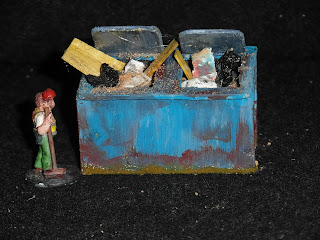 Bin number three has its lids open because of all the rubbish jammed into it.
I think we've all seen this sort of thing at some time or another and it adds to an otherwise fairly boring model.
The bulk of the rubbish is a kitchen towel which then had all manner of bits and pieces added to it. Just wiping my hand over the table I work on gave me enough small bits to sprinkle over the glued towelling.
I couldn't really start to say what all the other bits are, but there is mdf, paper and bits of stick  in the debris. 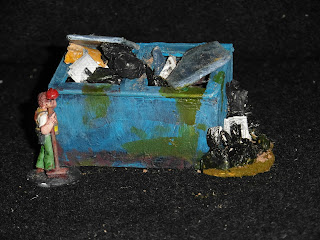 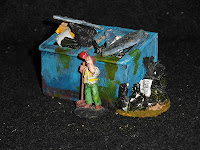 The last bin, bin number four, I actually put a little extra effort into, which I hope can be picked up.
As can be seen, one lid is again being forced open by garbage, whilst the second lid has actually been snapped off, bent and left in place. 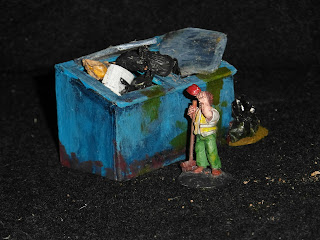 The bin bags were an experiment and are actually of two styles.  I was so pleased with these that I made a lot more for future use, they'll appear in a future blog. Also in this bin you should just about be able to make out one of my sacks (top left corner), which have proven to be quite a useful and quick detail to add to a model, as they can represent anything from a bag of cement to potatoes or sand.
There are also a few newspapers to be seen amongst the rubbish. The newspaper fronts were all gleaned from the web and I made up an A4 sheet of these with corresponding fake backs.

These particular models never actually made it to "WIP" status as they were all completed in  about six days with about a hour's work done on them each day. The back and left side of each of these bins was purposely left devoid of detail as I wanted them to be easily abutted onto the walls of any building.
Whilst they may look a bit rushed, there's a good reason for that (they were), but they're usable  and in my opinion don't look too bad (If you wear sunglasses, dim the lights and squint - Ed.) and they could be just the place to find that  two-by-four for your improvised weapon against a zombie !

That's it for this week, thanks for taking the time to look and as always, your comments are both welcomed and appreciated.