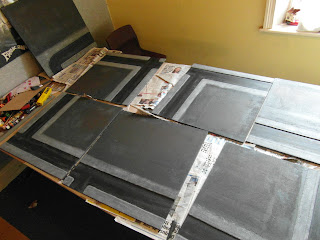 Once all the terrain boards had the pavement pieces glued in place, a little filler was added to hide the transition from the road.
Next up was the painting of the various "sections" of the boards.
Basically there are three main parts to each board.
First, the road itself, a black base was used as I wanted a tarmac look and it gives a good definition between road and pavement.
Next, the pavement. I started with a general grey colour that was increasingly lightened. 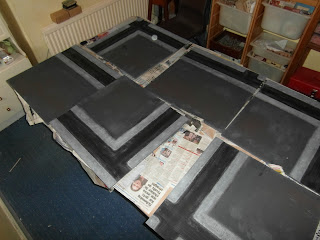 Lastly was the expanse of what would make up the areas around buildings, alleyways backyards etc. This had to be a generic grey colour but I added a lot of browns along with the various dark grey shades.

This photograph on the left  shows the same boards as above but  from the opposite side of the table.

It is just possible to make out the various shades of colours used on the waste land parts of each  board. 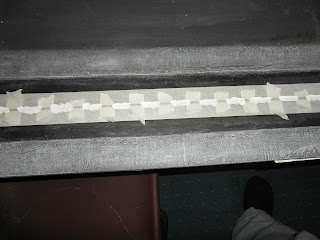 Once I was happy with the general appearance of the various boards, the next stage was to paint in a centre line on each road.
To assist my somewhat shaky hands I used masking tape about 5mm apart for the centre line and the width of the masking tape as the gap between the lines.
This left a nice gap of about 25mm between each line.
The final masking tape effect was rather like a ladder.
Rather than actually painting the lines I used a sort of stipple approach with a fairly stiff brush. 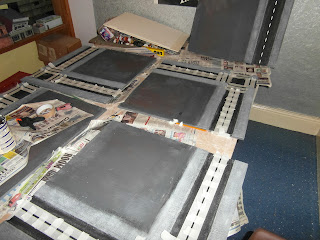 The ladder effect of the masking tape can more easily be seen from the photograph to the left.

The test piece used in the above photograph can also be seen in the top-right of the photo.

The masking tape has been removed to reveal a straight dotted centre line which wasn't too bad in my opinion and at the very least suitable for wargaming on, even if not to exhibition or demonstration standards. 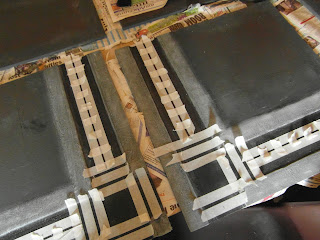 This photograph shows the masking I used at each junction where the pedestrian crossings will be.
I've seen various designs of these and decided to go with the diagonal striped variety.
These are enclosed within two broad stripes, which alone would have been adequate as markers for the crossings.
The three pieces of masking tape that are joining the pavements at right angles provide the enclosing border lines of the crossings. 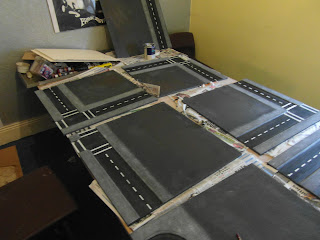 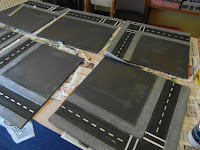 Here are two photographs that show the crossing lines and centre lines once they had been painted and the masking tape had been removed.  Removing the masking tape did take a few bits of paint with it, but these were few in number and only took a couple of minutes to fix.
One thing I had learned from the practice piece was that painting the lines a pure white was a mistake. They looked far too pristine, so I darkened them a little  as I went along and although it won't show up in the photographs, it was well worth the trouble. 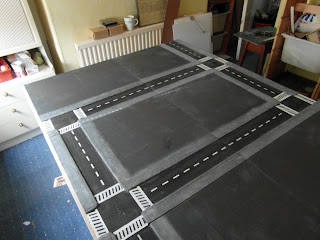 The next task was to paint the diagonals on the cross-walks, which I did using a 5mm stiff nylon "chisel" head brush.

I'm not the best in the world at keeping a steady hand whilst trying to paint a straight line, nor am I that good at keeping a uniform thickness, but with another brush ready to cover mistakes I eventually got to the stage where I was fairly happy with the overall results.

As far as finishing painting I was almost done, all I had left to do was paint the edges of each board a darkish grey to finish them off. 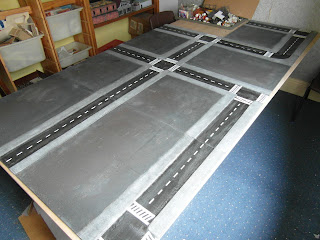 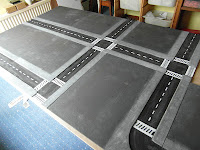 Here's a couple of photographs of the same board layout, showing all seven completed boards, but from opposite "ends".

You can see that the curved road still has to have its centre line completed, but that is a minor task that will be done when I'm having a steady-hand day.
The roads also had various greys and browns added to them in both washes and highlights, so they didn't appear as a harsh black.

There were a few minor problems and hiccups that I encountered when  making these boards. First up was the problem of using two different sized cork tiles, one set I used was metric, at 300mm a side and the other older set I used was Imperial at 1ft a side (about 304mm) which  meant I had to trim about 4mm overlap from a lot of the boards. (There was an unexpected bonus because of this which I'll relate in a future blog.)
The next potential problem I encountered was in trying to purchase more tiles, my two local DIY stores, either didn't stock them (B&Q) or had them at 3.2mm thick (Wickes), As my current tiles are approximately 5mm thick these won't match up too well - so its back to the drawing board (or the interweb) for my next terrain boards. I have one to finish from the above "set" and two bigger boards planned, each 600mm x 1200mm. 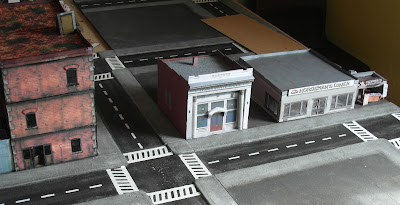 The final photo shows  a mock-up of the layout with my meagre collection of buildings in situ.
If I was to attempt this project again I would widen the roads to 150mm, rather than the 100mm that they currently are and I'd also plan to have all the materials I needed before I started out, probably with a few extra bits too.
Before anyone asks, I've no intention of adding  street-lamps, traffic lights, or anything else of that ilk.  The main reason being one of practicality, tall slender things tend to get knocked over if not affixed and broken if they are.   In addition, this is a wargaming set-up; it's not meant to have details to the n'th degree like a model railway layout.  If features don't add anything to the game (for example - cover) then I think its hardly worth the extra trouble of modelling them. I will however be adding the usual street furniture that one might expect, skips, garbage cans etc.

That's it for my Mark 1 Urban Terrain Boards, all comments are of course welcomed and appreciated.

If anyone is lurking out there whom I haven't already said "Hi" to then "Hi" I hope you find something here you like.
Posted by Zabadak at 06:36