Even though I've got "United States of the Dead" as my current read, I've actually finished that book and what I thought was the last (fifth) book "Dead Surge" in the series "White Flag of the Dead". The fifth book doesn't actually complete its story-line and ends on a bit of a cliff-hanger, so that there is a good chance that there is a sixth book to come.
As I've stated previously all of the book suffer from poor proof-reading a thing that I'm generally no too tolerant of, but as you can surmise from the fact that I've now read all five current books in the series and I'm looking forward to a possible sixth that it hasn't bothered me that much.
There have been a few times when I've winced at a typo ("lances" rather than "glances" threw me a little) but there is a cracking story that more than makes up for them.
As I've said in previous blogs the general overall story follows the concepts in Sean T Page's book "War Against the Walking Dead".  Books one and two deal primarily with survivors trying to re-establish some form of normality after what they term "The Upheaval".
There are of course a lot of formulaic situations within the series, but book 3 (America the Dead) and book 4 (United States of the Dead) follow the same story-line which to be truthful is a bit contrived, but nevertheless is still entertaining.
Throughout the series the Zombies (they're always referred to as such) do change and develop, but they do so very slowly and more or less in what has become an accepted formula.

The "White Flag" of the series refers to the instruction to leave a white cloth from a window or on a mailbox to indicate to the authorities that someone in the household has become infected - a nice idea I thought and one that could well be used. 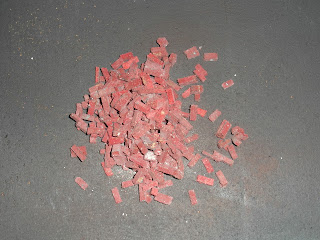 As a by-product to my Urban Road building I was left with long strips of cork tile  4mm-5mm wide and 304mm long. On a whim I decided to try and make some rubble with them.

The result of my efforts can be seen in the photograph to the right, although the "red-ness" of the bricks appears far brighter in the picture than it does in reality.

The lengths of cork were cut into smaller bits, anywhere from 1cm to 5mm in length and put into a plastic yoghurt style pot. I added a basic acrylic red colour and stirred until I thought that the bricks were sufficiently covered. When they were all but dry, I next added a smaller amount of a darker red and again stirred, but this time the objective being to get some paint on most of the bricks, not to cover them completely.
This process was continued with brown and a touch of black. In-between the various colours, the bricks would be separated roughly by hand as the drying paint tends to act like a glue too. This of course resulted in some of the cork breaking (which added to the textures and colours) and  there were some pieces stuck together, which were left. 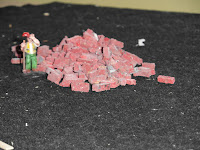 As a final touch a very small amount of powdered filler was added to the mix, which again added to the colouring of the bricks.

The final photograph give some idea of the scale of the pile of rubble that I've made, the figure being a foundry workman.

I'm currently trying to mass-produce buildings for my campaign and I'll be needing some ruins as well as complete buildings no doubt. The rubble will add some easy detailing to any ruin I make and it could also be useful in a construction/demolition site as well as a stand-alone piece of cover for any bit of wasteland.  It took little to no effort to make and for a first-try I thought it came out pretty good, so much so that I'm considering making more.

Well, that's it for this week, thanks for taking the time to look; all comments are of course welcomed and appreciated.

Finally if I haven't already welcomed you, then "Welcome" (that's you "the DM's Revenge"), I hope you find something here to interest you.