This was my first venture into making terrain boards for myself and I took my time planning it.
The first criteria was that the boards had to fit on my table top of 8' x 4' (approx 2440mm x 1220mm), with no overlap. The second criteria was that all the boards had to tessellate to enable varying board layouts.
6mm MDF was chosen for the bases of the individual boards and these were to be overlaid using 300mm x 5mm cork tiles. Both cork and  MDF are fairly easily cut using sharp craft knives.
The sheets of  MDF come in are the same size of the base board that I have and were able to be cut to a standard 600 x 600mm square.
The cork tiles come in 300mm squares in a pack of 9 tiles. The decision to use cork tiles was made a lot easier by the fact that I already had several !

I had determined early on that I wouldn't have roads running down the middle of the terrain boards as I'd found this very restrictive when making river terrain, although these being roads suitable for the USA it may not have been that important.  The photograph to the left shows the various basic pieces. The short strips were off-cuts from another project  of many years ago. 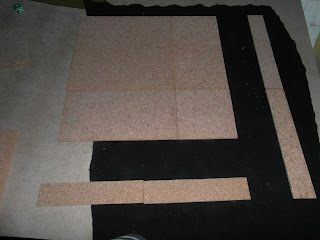 The photograph to the right shows the basic idea for format of the boards.

This black are is  here the actual roads will be and the raised areas are the cork pavements etc.

All in all then this particular board would use the best part of 3 whole tiles. 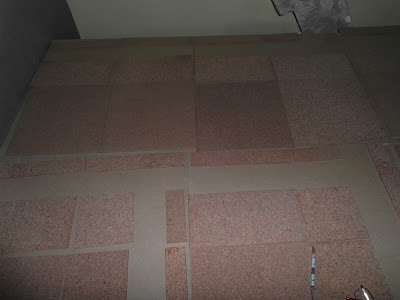 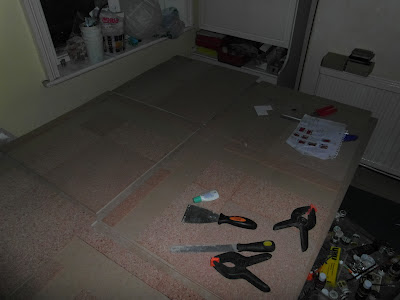 These two photographs show  of all the boards with their tile overlays in place.

Having determined which bits went with which boards and in which orientation (taking advantage of the manufactured straight edges wherever possible) I then beveled off all the edges of the pavements.

This in itself was a tedious boring task, b ut one I felt that had to be done.
In the top-right of the photograph you may be able to make out my rough working-outs  of the eight boards. 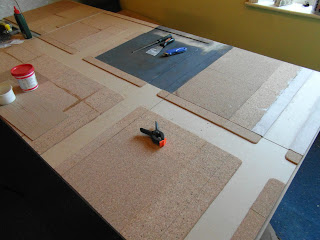 This next photograph shows the same layout as above with all the cork overlays glued into position.

From this photograph you can see that I also needed some 50mm x 50mm squares for some corners of various boards. This was pre-planned and they came from the smaller off-cuts that I had around.
It should also be noted that I'm one board short of my original eight. This came about because I wanted to make a curving 90 deg. bend rather than  a standard right angled one, and I was one cork tile short ! 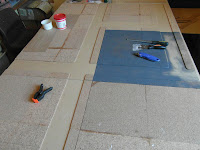 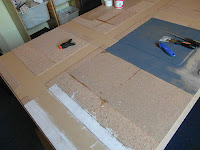 These  next four photographs are all of the same board configuration.

The coloured board, whilst it may look a bit blue, is in fact a fairly dark grey (I'm going to sack that cameraman one of these days). 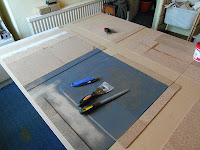 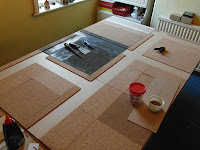 The blue/grey board was an experiment  to see if a spray tin would suffice to colour in the board.
It took far too long and too much spray, so that idea was abandoned.

Filler was used on the pavement for additional texture and to seal the join between pavement and road.
Posted by Zabadak at 09:25