The title of this week's blog may seem a bit enigmatic  but it really only refers to Zombies and their Civilian counterparts from my MegaMini collection. 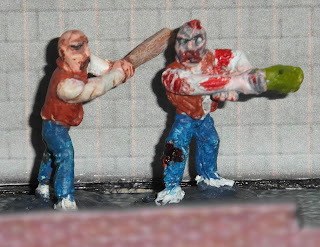 I've finished off another dozen civilians including seven children (they'll probably be shown  next week) and matched up their obvious zombie counterparts. They all come from either the Modern Civilian Range or as in the photograph to the right, their Thugs set.
The thug shown here is one of my favourites from the Thug set, even though he suffers slightly from the large head syndrome of a few MegaMinis.
As can be seen, in his "normal" mode, he's wielding a baseball bat, whereas in his Zombie mode, he's wielding an arm, although it's not very apparent from my photograph. 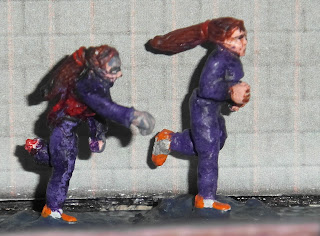 Next up is a female jogger.
Her Zombie counterpart is really not that inspiring, because I prefer the classic shambling zombie.
Like many of these figures, little has really been done to alter the figure  dramatically from its civilian appearance to its zombie format.
I suppose though, that too dramatic a change  and there is the chance that the figure wouldn't be recognised from one form to another.
I think this is the third or fourth jogger that I have and one can easily conjure up a scenario for them all to take part in (read "become zombie fodder in"). 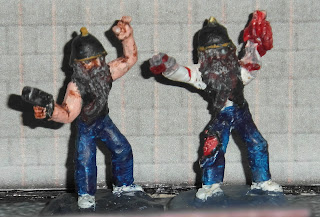 Another one of the Thugs and his zombie counterpart and once again little effort shown in the stance of the figure.
The clump of whatever in this zombie left hand is indefinable, so I just painted it up as some form of flesh, which hasn't actually come out that bad in my opinion.
He also suffers from having a slightly large head, but it's not that obvious because of his helmet and beard.
Last up from this particular batch is another of  my favourites in her civilian form, but I'm not that taken with her in zombie form. 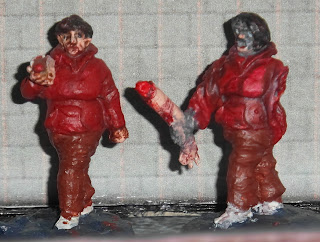 The human version of her is actually eating a hot dog, a feature which I quite like (I have quite a few figures now, eating various forms of fast foods  - which will do them no good whatsoever come the apocalypse).  The other feature I like about this figure is the height and size of the figure, she's taller than some of the men featured here (though not by much) and she's obviously slightly overweight (all that fast food).
Her zombie equivalent however is not that  impressive.  The arm in her right hand is acceptable enough, but the missing left arm has seemingly had little thought applied to it other than to lop it off. I think I would have preferred an actual arm there in the classic "reaching out"  zombie stance. 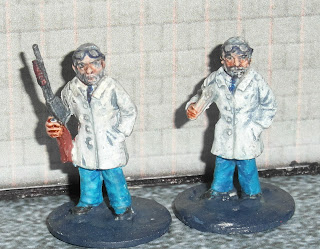 These last two figures are both from Black Cat Bases and I've attempted to paint them up as identically as possible.
They will be used to represent the same person before and after the start of the apocalypse. The deadly clipboard making way for a more practical pump action shotgun as soon as possible.
The figure is of course meant to represent my alter-ego in my ATZ campaign, The shotgun, though not my weapon of choice, would be more practical than my preferred choice of an AK for me, as I'm not too bad a shot with one in real-life and I've never fired an automatic weapon in my life ! (Come the apocalypse though I'll soon learn).
I think my persistence in Photography 101 is slowly paying off as I've now found how to crop photographs! I hope its apparent from the photographs in this blog that I have indeed improved (at least a little).
Next lesson perhaps  - "How to avoid those unsightly shadows" !

Once more thanks for taking the time to look and of course all comments are appreciated.

Fiinally, as always, if I haven't already welcomed you then "Welcome", I hope there is something here to interest you.