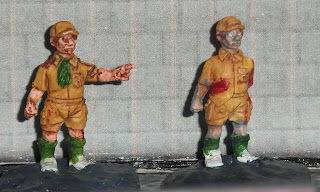 Here's the second part of my matching up the obvious civilians from the MegaMinis ranges, with their zombie counterparts.
This week I'm concentrating on the children.
One of the children that I've omitted (even though it's a very nice figure) is that of a child-ballerina, the zombie version of her is an excellent crawling figure though the human form has her in a full-on typical ballerina pose, which I though was less usable.
First off then is this rendition of a US boy scout, a quick look through Google gave me some vague idea of the colour of his uniform but in the end I went with what I felt like ! 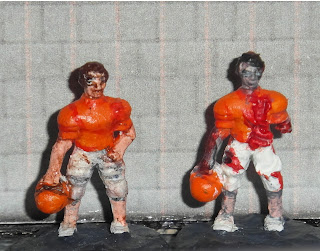 Next is the all American icon of a "football" player.
Don't ask me what's going on with his eyes (in his human form) because I haven't a clue, as always I'll blame the drugs and my poor photography skills.

It'll no doubt be obvious from just these two figures (and some from last week) that very little has been done to the human figure to "zombify"  them.

Most have merely had a limb or extremity lopped off and a few hacks made at maybe the torso or head.

Whilst this is really no bad thing if you want to instantly recognise one figure in its other form it does seem as if little effort has been made. 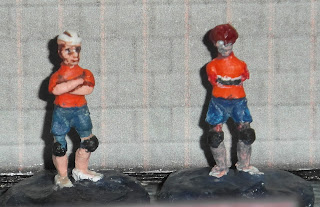 Again you can see that the human figure has had his folded arms removed. I think I'd have preferred it if the zombie figure had had the classic zombie  outstretched arms.  The figure is probably a skateboarder or BMX biker.
The human version has a few paint overrun problems, (especially his thighs), which I didn't notice until taking these pictures, I blame my failing eyesight (as well as drugs and lack of photography skills). The zombie figure doesn't fare any better, his apparently naked lower legs now seem to have grey socks ! Oh well... 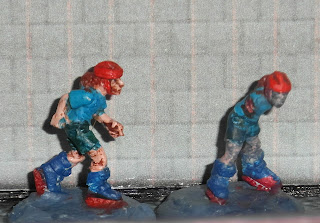 A roller blader who at least has two very different poses, although the zombie version (again) has no arms - not one of my favourite traits in zombie figures.
I really don't like missing limbs, after all I can easily hack them off myself.  It's the same with those zombie figures that have a hole through them, they don't do anything for me at all.
Given two identical zombie figures with arms, I can lop the arm (or arms) off one making it distinct from the other 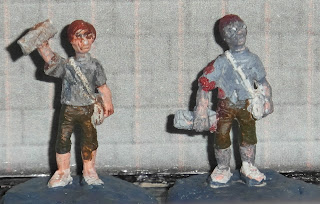 One of my favourite figures next, a paperboy.
He's a t least got all his limbs and he's in a sufficiently different pose to be interesting.

Again the human version of him has some paint run on his leg (I must have been  having a bad day the day I painted these).

Of course those figures with their paint problems  have all been re-assigned to the painting department, having failed quality control. 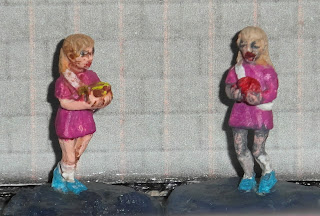 Again a little variation in the poses makes the zombie version a much more acceptable figure.

When compared to the efforts of other manufacturers' "before and after" figures these really are quite poor, but taken as individuals they're not really that bad. 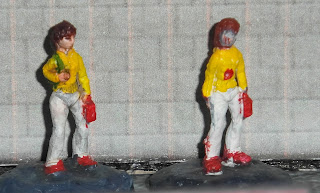 Possibly the worst zombie figure in the whole of this group, is this girl, carrying her lunchbox.
If you can't make out the facial features on the zombie version, there's a good reason, I couldn't find any !
The human figure is a nice enough figure, but the zombie version leaves me cold and I put little effort into finishing it off - it'll be relegated to the back of any horde no doubt.

My final offering for this week is a skateboarder again in two versions, but I'll be obvious from the photo that we have in fact two figures here,  which although very close in appearance are not exact duplicates. 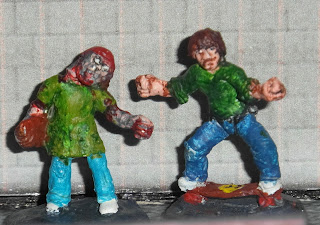 The zombie version is actually wearing a hat whilst his  human form doesn't have one.
I like this "version" of the skateboarder, though I'm sure they're not meant to be duplicates of one-another.
On reflection, whilst it's fairly amusing to be able to show "before and after" versions of figures in games, there really doesn't seem much point to me as the transition to zombie normally takes place "off camera", after the game.
With this in mind I won't be going out of my way to make any further "before and after" versions of my civilians.
Currently I'm going through the remainder of my Mega-Mini zombies (about thirty or so) and I have found a couple more possible zombie versions of civilians that I've already painted, but I won't be attempting to paint them as their supposed civilian counterparts.

That's all for this week, the civilian population grows, with another fifty plus on their way, coupled with the aforesaid zombies, my paint table is fairly overloaded, but at least I'm about three-quarters the way through painting them ! Couple that workload with the three shops I'm making (slowly), books to read, films to watch, blog to keep updated (and others to read) and no doubt you'll empathise with me that there
really just isn't enough time in the day.  Did I mention real-life keeps interrupting too ?


All comments are of course welcomed and appreciated as always and if I haven't welcomed you to my blog already, then "Welcome".
Posted by Zabadak at 07:07