Well, I finished reading "Among the Living", by Timothy W. Long and what a good read it was.  Even though it only dealt with the first three days of the "outbreak" leading to the apocalypse, the various ways by which the four diverse main characters deal with it in their own ways is interesting enough in itself.
The cause of the outbreak was a bit of a disappointment though and is only passingly mentioned towards the end of the novel; however the snowball effect of both the outbreak and within the actual story-telling makes up for it. The stories of the various main characters build throughout the telling of their individual episodes until the dramatic final few chapters when what had been a quite leisurely pop-corn type read became a real page turner !
Whilst this style of story may not appeal to everyone, as each of the main characters get a chapter then the story moves on to the next, I felt it made for a refreshing change to the "concentrate on the main character throughout" style.  I was kept wondering if any of them would ever cross paths.   I'll let you wonder about that too.
Suffice to say that I was impressed with this novel sufficiently so that I' looking out for the next one - "Among the Dead". I rate it as a "Well worth a read" and scored it on my 1-5 scale with a 4 ! 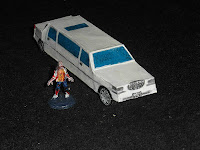 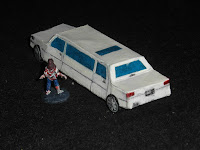 Whilst I haven't  managed any major progress worthy of mentioning recently I did experiment with printing out a vehicle in black and white onto card rather than using my coloured printer  (I was basically idling on the "wrong" computer). I don't think that the final effect of what is basically a painted card photocopy isn't that bad and it's probably worked out a bit cheaper too. I won't be rushing to do anything similar in the near future though. 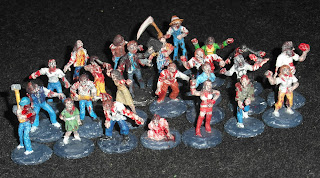 I have taken the new-wave photography approach of having the picture slightly blurred and out of focus.
This style of photo seems to make the figures appear far better painted than they really are and suits me fine and has nothing to do with me rushing to get substance to this week's blog ! I'll try and get some better photographs of them in the near future. The right-hand photo is of yet another three MegaMini civilians and in my opinion, three of their more "interesting" ones. The first two figures are obvious enough, whilst the third is , as far as I can tell, the archetypical "Spiv".
"Psst -  Mister. Wanna buy a watch ?" 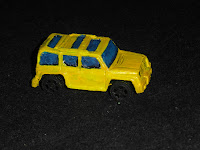 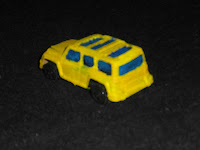 My final offering is another another of the Humvee wannabees that  I featured last week, though not quite finished, it's close enough and looks good if you squint.
it may not look it, but it has actually got wheels ! It was originally left to one side whilst I did the majority of the others as this one was a bit damaged.
Let me finish off by telling you what I have actually been concentrating my efforts on:
I've been slowly building terrain boards for streets. I've got eight 600mm square boards that will fill my new table and a couple of 1200 x 600mm that will also be utilised, though I'm concentrating on the square boards first.  These will feature in a future blog of course, when I've made some real progress on them.


As always, thanks for taking a look here, all comments are of course appreciated and if you're new to my blog and I haven't already welcomed you then "Welcome", I hope you've found something of interest here.
Posted by Zabadak at 16:21