First of all let me extend a welcome to anyone I haven’t already thanked for looking at my blog,  As I get to grips with my new camera (a birthday present to myself) I’m afraid you’ll have to put up with the poor quality of photographs.  I’ve been unable to use some of the photographs as the glare on them is truly awful.
Buildings
I’ve been scratch building model buildings for over forty years now (yes I am that old), they have ranged from Pele Towers to small medieval villages and castles (I think I’ve built four or five castles in all) 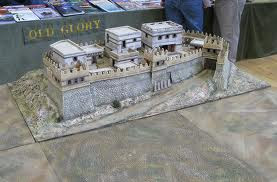 For one of Durham Wargame Shows I built a Troy-type citadel which took several weeks and weekends to make; not the largest model I’ve made but one of them.  I’m not that good at colour coordination so I took advice on the painting of it and had some help with that, but the model itself was probably 95% all my own work.  I haven’t any of my own photographs of it, so here’s a borrowed one. 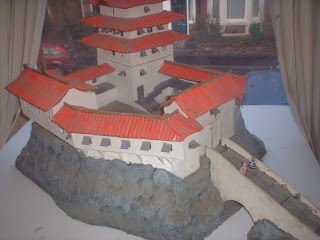 This photo of my Japanese castle was taken with an old digital camera a while ago, so add that factor to my ineptitude with a camera and you have a more rubbish photo than ever !  The castle was made from thick cardboard over a two week Easter holiday sometime around 15-20 years ago.(I was bored) and it wasn’t until sometime later that I discovered that Japanese castles never had red roofs but in fact were always blue to the best of my knowledge.  The two figures on the approach ramp are Foundry figures from the Indian Mutiny range, so it should give you an idea of the size of it.  All the roofs lift of to enable figures to shoot out of the windows and the main doors do open.  Even though I have quite a collection of Samurai figures, this particular model has never seen the light of day in a wargame.
For my Zombie game, which is set in the contemporary era it was obvious that I needed some suitable modern buildings.  Using what is free on the interweb and a few purchases from World Works Games   (http://www.worldworksgames.com/store/) I’ve cobbled together two buildings.   The first is intended as a convenience store for a petrol station and the second is representing a cheap hotel. 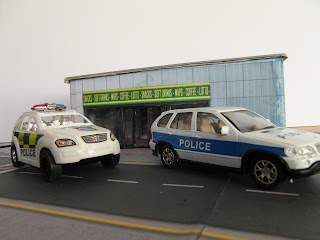 The convenience store has “sliding doors” at the front and three other doors, all of which were a pain to incorporate into the model.  The bits and pieces inside the store were either form World Works or gleaned off the interweb  The roof is a temporary one quickly put together for this piece. The two cop cars out front are almost identical save that the one on the left is plastic with a silver interior (three for £1 in Poundland) whilst the one on the right (sans roof light (is a die-cast mode, probably used by the former manufacturers to rip of their version). 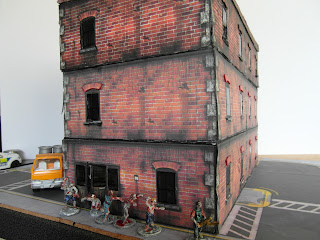 The Cheap Hotel (™) , I’m quite disappointed with overall, but as it’s one of my first models I’ve attempted in years and was constructed whilst under the influence of masses of drugs, I shouldn’t really be that concerned, they can only get better (I’m still on drugs but not such a high dosage that I think everything I do is wonderful).
The other views of the model show the top floor and the middle floor and even though there are no internal fixtures in place yet, I have made them all ready to put in place.  The ground floor has no internal detail yet, save for the staircase to the middle floor and the front and back doors, both of which can be  opened, as can all the doors in this building..
Books
I’ve finished reading “Dying to Live – Life Sentence” by Kim Paffenroth the sequel to “Dying to Live”, all a bit formulaic and even predictable in parts.  The ending could easily be construed as being set up for a third book in the series, "Dying to Live - Last Rites" which I’d probably get and read for completeness, but it won’t be at the top of my reading list.
I’ve also added a “What’s on the shelf” section to my book reviews page. I tend to have one e-book that I’m reading and one hard-copy book on the go at the same time.  The e-book reading is reserved for those interminable waits that I must regularly endure in hospital, whilst  the hard-copy books I read at my leisure, what little leisure time there is with the demands of this project and real-life.
Book’em: 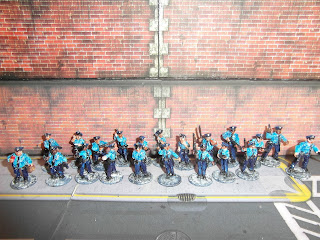 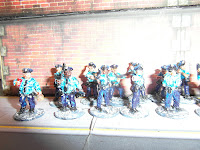 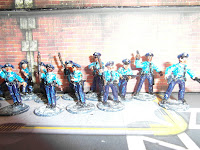 The photo should explain all; these are my nearly completed police force to stem the apocalypse in the early days.  I say nearly complete as I keep finding little details that I’ve missed, that need attention. They are mostly Foundry figures, with the addition of the six Black Cat Bases’ cops, which I really like (wristwatches !). You may just be able to make out the four Foundry conversions I’ve done, to make four more individual figures , I’ve placed them adjacent to one-another for ease.  They  have had shotguns, nightsticks and a BA$$ pistol added, one has had his arm repositioned too add of course they come with added glare !
Posted by Zabadak at 09:06