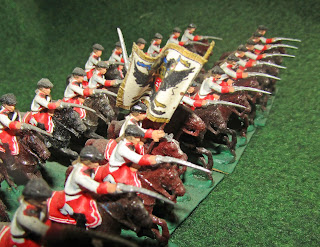 So I got the drawer of Cavalry out for this week's post and immediately spotted it was full of Austrians - only Austrians ! After some deep thought as to where the Prussian, British, Hanoverian and French cavalry were to be located I finally found them in yet another drawer (not from the same set as all the others !).The photgraph on thr right shows an Austrian heavy cavalry regiment -curassiers (Ansbach iirc). All the Austrians were not painted by myself as far as I recall but were painted at the same time as my Prussians, more than forty years ago.
All the figures were dusty, of course, having not been used for some twenty years plus, some were minus heads and finding an intact unit was tricky.
I think everything had been quickly packed away after our refight of Minden.
Today's photographs were  taken with the added disabilty of having shaky hands, so apologies for the somewhat dire photographs, Nevertheless here they are:

Many of the figures here had their heads replaced with grenadier heads (remember I have a huge surplus of these and some were re-fitted with drummers heads (also in the surplus category). Some hussars had their furry colback headgear cut down to represent mirlitons and had very thin paper 'streamers; added, the latter being lost many years ago.

I still have two more drawers of figures from my 7YW collection (sorry t bore you all still)  to post about, cannon and ancillary stuff - probably some more cavalry too ! I've also comeacross very few generals, though I  thought I had about twenty Hinchliffe ones - they'll be somewhere no doubt!

Thanks for taking the time to visit and as always your comments are always welcomed and truly appreciated!