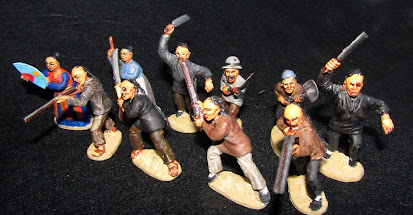 This last week I took advantage of a rare sunny, wind-less day, did the final finishing touches to my Chinese westerners and even managed to spray varnish them!
The photographs below show their provenance (Mexican peasnats).
I do have an extra Mexican shooter that couldn't be converted (with my limited skill) as he's wearing a pocho/blacket over his shoulder, but all the Chinese men do have 'pig-tails' that can't really be seen, save in the top phot where one can be made out.
Inspired by the arrival of my latest purchase, I went to work on my remaining Mexican peasant, attempting to change many of them into a unique figure (mostly for identification in games).
I have mostl four of each figure, the results of my efforts can be seen below, with the original figure on the left.

The two shooter poses are a problem, another weapon is not easily added and their limbs cannot easily be moved- plus I've run out of hats ! The six ponchoed (that's a word right ?) guys will have to have different coloured pochos as I see no other solution to distinguishing them Note: I'm am trying to get them as 'uniform' as possible, insomuch as they'll all have white tops, white trousers and a straw hat!

Next week will see all the remaining flash removed (where and when I spot it)  and an undercoat. when possible.

My first 54mm, 1/32nd scale building, in nearly forty years, is still under consideration, but there has been progress and hopefully more over the next week!

That;s it then for this week, thanks for taking the time to visit  - hopefully something here was of interest and as always your comments and both welcomed and truly appreciated - it's what keeps a lot of bloggers blogging  I reckon.