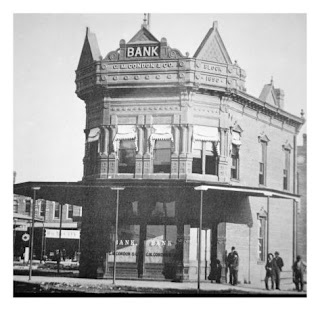 Sorry to disappoint but this has nothing to do with the Fonz, but the history of this post does go back to around the early 1970s ( I told you I was old - right ?). About that time the very first "Old Western Skirmish rules" were born and were eagerly leapt on by myself and another friend MIke Bell. He was so into the Wild west that he went to see it for himself (though it wasn't wild then). He told me of a story of him pacing the front of what was  the Condon Bank in Coffeyville Kansas, which was then (iirc) a travel agent, but now is a Visitor Centre.
Coffeeville, is the town where the infamous Dalton gang met their end - just in case you were wondering.
Mike and I drifted apart due to real-life complications around the same time, but neither of us lost our interest in the "Wild West".
Fast forward to modern times and thanks to Facebook we once more made our aquaintance, I followed his journeying to Wyoming researching and holidaying. 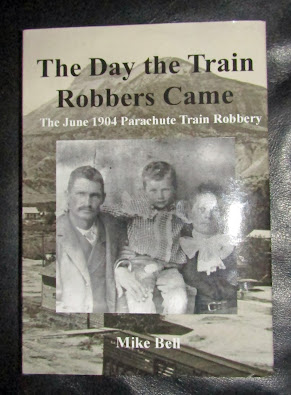 His research, on the "Wild Bunch"  culminated in the publiction of his book "The Day the Train Robbers came" (The June 1904 Parachute Train Robbery).
I awaited the publication and was delighted when it eventually made it to Amazon (£12 - paperback).
I asked him, almost jokingly,  how I could get a signed copy and he said he'd fix it for me.
Last week  a parcel arrived with a signed, hardbock, copy of the book:
"To Joe Newton, one of those who inspired my wild west Journey.
Mike Bell."
Along with this tome came two other, what would best be described as Booklets, "Outlaw Roots" - discovering the lineage of Leroy Parker, better known as "Butch Cassidy", who has Geordie connections it turns out.
The second  book "Who are those guys ?" - a quote from the film "Butch Cassidy and the Sundance Kid", telling the story of the Pinkerton agents that featured in the film (though iirc they didn't chase Butch or Sundance).
The books are going to keep me busy for quite a while probably to the detriment of my hobby time) and I'm really looking forward to putting my feet up and savouring the contents (I'm already halfway through one !).
In other news my painting are looks like a bombsite once more, but I am making progress on my westerners (or as I now call them - "The Village People" referring to their Xmas Village heritage!)
That's it then for another week, I'm very near to getting some figures finished, but as always,  real-life will no doubt rear its ugly face and try to stop me.
Thanks for taking the time to visit and of course, as always, your comments are both welcomed and
appreciated.