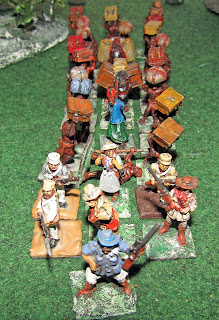 Two weeks (game time) into this adventure, sees the expedition overcoming an ambush by seven Tribal
warriors with little loss, namely a soldier and their wounded Interpreter Horation Mundella. The latter had therefore to be carried. IN game terms in meant the whole column was moving at half speed. Moving into unknownn terrain (4mp) is therefore impossible, unless the expedition waits a day (the expedition at half speed has only 2mp per day)
The photo on the right shows the slightly depleted column, carrying Horatio, who can be jst seen in the fourth row behing Lady Alexandra.
Once more then from the Journal of Frederick Cartington:
Perha"Alas,  two weeks into the expedition and it has been cut short by the wounding of poor Horatio, having to carry him will make for a very long journey back to Jimlnd and we shall follow our outbaound route as much as possible, therby cutting a trail through our already newly disovered terrain "
Our bearers decided that Bad Juju was present to our South, our intended direction and refused to move in that direction; we therefore altered course to keep moving and took a brief divrsion to the south-east.
Perhaps should have really heeded their absurd beliefs as we were set upon by a large body of the hateful pygmies" 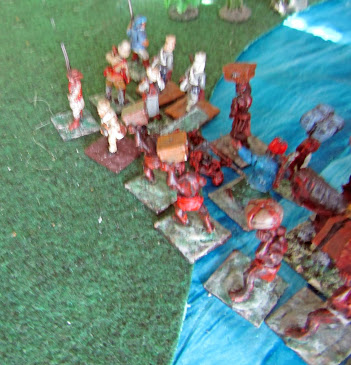 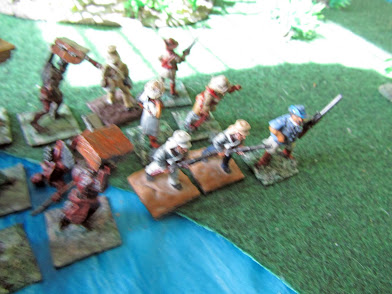 [Note Doc and Lady Alexandra sheltering tin the centre ]
"As the pygmy's intention cleared we adjusted our postion, sending LAdy Alexandra and the Doc to the rear, whilst the bearers, many of whom were stuck in the muddy bottom of the stream,tried to get to safety too." 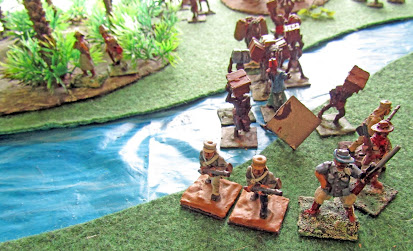 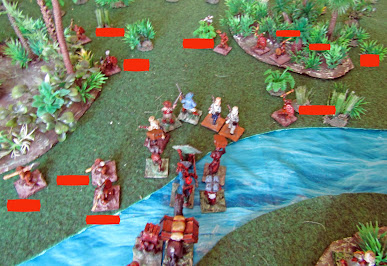 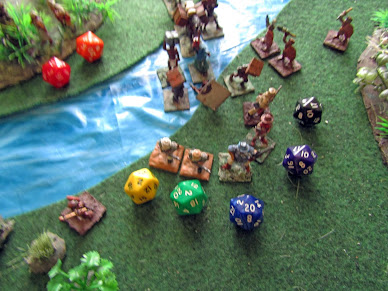 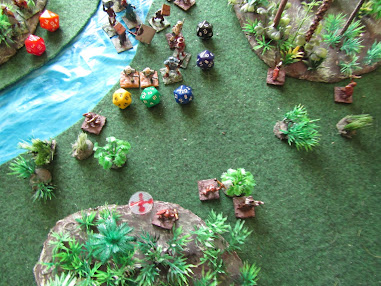 [The aftermath of the shooting, one dead pygmy -yikes!] 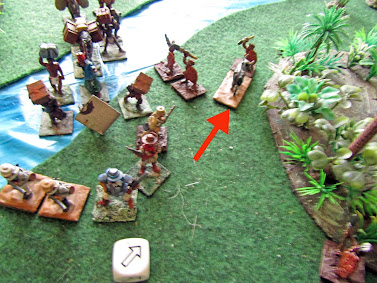 [Max's score of a twenty brought a water buffalo into play, 4" in the direction of the arrow ! - yay!] 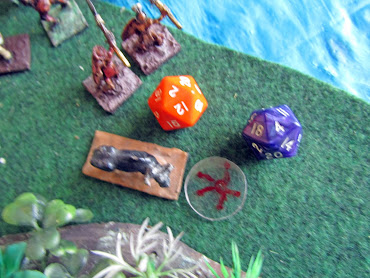 [The buffalo immediately disposes of a a pygmy- yup, the pygmies are rubbish fighters !] 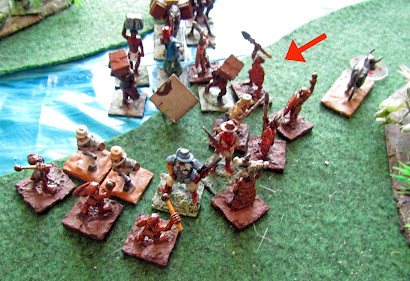 [Let the fighting commence !]
"Our marksmanship was off and only managed a single volley that saw off one of the little blighters, a water buffalo, disturbed by all this kerfuffle also dispatched one of their number.
In an instant we were engaged in a bitter face to knee struggle as these curs charged us" 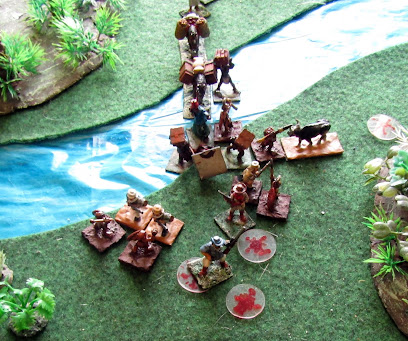 [The pygmies, as expected, quickly lost all but one fight and hit a bearer - who made his saving roll] 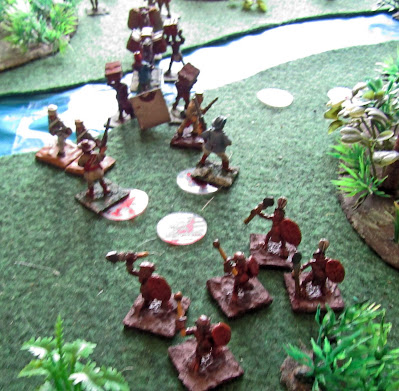 [Max  kills another pygmy, whilst the buffalo kills the last pymgy needed to cause a rout, itself dying to the hero bearer].
"The fighting was swift and confusing\I turned to aid a fellow soldier that seemed to be struggling with his opponent, but they all fled crying out some guttural noises" The buffalo was seen off by our bearer, semingly it was wounded by the pygmy it faced as he was in turn gutted by our brave bearer skewering him from behind."
"It seemed to be that between ourselves and the buffalo, we had killed half their number and they  fled as quickly as they cold.
"It took another fourteen day to trudge back to Jimland at our slowed pace and though we met with many natives, most were at least oblivious to presencewhislt other glady trade with us..
All of us were indeed grateful to venetually be back at Jimland" 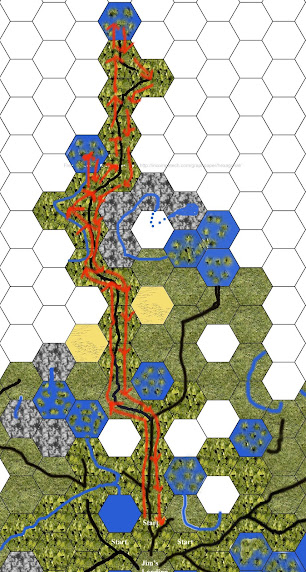 From my Pov, the fight at the end could have gone so very wrong, but the pygmies weren't the fiercest opposition  - even our bearers could give them a fair fight, so I wasn;t that worried. The route home however took another fourteen turns, during which I always bought from friendly natives and sparingly gave out trade to avoid conflict (we had even given the last, of our trade, at the time, to our pygmy opponents  in the last fight, trying to avoid a fight !
Although the last fourteen campaign turns were merley a paper exercise, each turn of the event deck was full of tension for me !
The map on the right shos the route of the expedition, each arrowhead indicates the end of the day's travel, early on thee were roads but eventually new hexes were uncovered and on the return journey these new hexes would have roads made by our expedition travlling through the already explored hex.
Each time I hit a swamp, I would back-track, being lost in a swamp is no fun!
I was a singlehex or two from my objective of getting a northern road twenty hexes from Jims landing; the reason getting so far wa to establish a new trading post and thus a new starting position for exploration as the immediate land around Jim's Landing is well covered.
This expedition had spent around $590 to outfit and expences incurred during the expeditionbut had ammassed $561 and had food in hand too, giving an expedition total of 699 points ! - Best yet !
Thanks for taking the time to visit I ghope there was at3 least someh#thing of interest.
As always, your comments are both welcomed and apprecieted.
Posted by Zabadak at 07:23