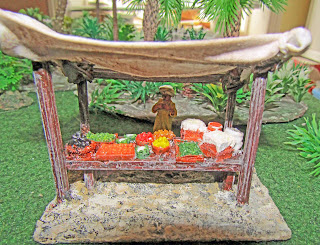 In yet another week where I haven't had the will or motivation to finish my Zouaves off, once more I completed another couple of pieces in my paint area. I have managed some painting on the Zouaves  (about six hourly sessions), but I'm really bored with them ! I have finished off two stalls though for a break from figure painting , which means I have just another two (maybe three) stalls to finish off. I've also been painting up a lot of the stall 'extras', that will eventually be added to the bases.
First up is a fruit and veg stall from "Frontline", though it's only a table  when bought.
I've added the canopy and its supports built from scrap and a handkerchief.

The second stall is again from "Frontline" and would probably look more at home in a mediaeval setting, rather than the Sudan. I think it's meant to be a pie store, or at the very least something selling pastry-based products.

Finally, here's a pic of wip on some of the goods I'll be adding to the stalls.


I may have finished the Zouaves by next week, but as they hate me, and I them, it may take a while longer before they're finished and put into storage ! I do have a fall-back plan of finishing four figures, destined for Jimland, which are more likely to appear.

So that's it then for another week, thanks for visiting, hopefully there was something here to interest you and  as always   your comments are both welcomed and appreciated.