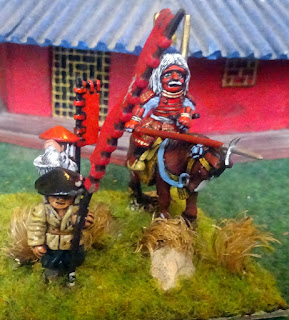 Digging out my Japanese Castle and Temple (tea-shop. takeaway or whatever) reminded  me that I have some Japanese forces - somewhere !
Scurrying around I eventually found two file boxes, that were heavy enough to house my Japanese Samurai forces.
Opening up the two boxes  I found only one contained figures I had started, whilst the other contained figures that I had bought from a friend many years ago (20?)

My figures are a mix of a  few manufacturers, Dixon, Warrior and iirc Amazon miniatures (though don't quote me).
I mixed and matched many heads, some looking OK but others looking quited bizarre.

So here's the photographs:
So the above is a sample of my two  hundred or so single based  figures, but in the other box....
It was at this stage that I wondered where the infantry for this force was, being convinced that I only had two boxes of Japanese, but I then remembered the infantry were in a separate box.
Once more I risked life and limb to access places Indiana Jones would have found tricky and recovered the missing box containing the remainder of my Japanese.
And finally, amongst all the oriental goodness was this chap, (whom I mounted on a slotta base):

So that's my Samurai collection, some of mine have seen action in a SAGA game recently (about three years ago) whilst the others to the best of my knowledge have never seen any form of tabletop action. So yet again another unused and forgotten army (or two!)
There are lot of better (possibly) figures on the market now, rather than when I started, but not that many in metal  and fewer still with any character to them.
I gave up on this project because I couldn't find a set of rules that were fit for purpose despite looking at many sets. Recent cardboard filled sets need not apply for consideration.

Thanks for taking the time to visit, I hope it was worth it and of course your comments are always welcomed and appreciated.
Posted by Zabadak at 06:40