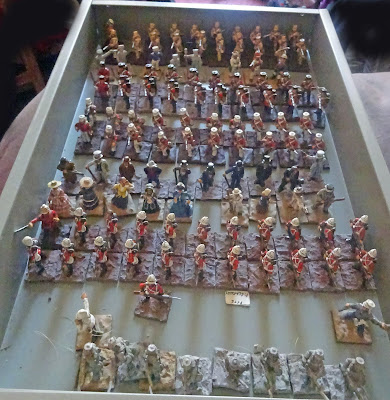 "Army" is perhaps an exaggeration for this particular force as it was yet another project that never really came to fruition, though I'm pretty sure that others had forces to add to my own puny effort.
Nevertheless many small-scale engagements were fought mostly to "The Sword and the Flame" rules (an excellent set of rules and still going strong after more than twenty years - Edit there is talk of a 40th Anniversary Edition).
The more observant amongst you will realise that they are for the Indian Mutiny, but the whereabouts of the single artillery piece I had for this force is a mystery.
(Note: The anachronistic two dozen infantry from the Zulu war in the foreground are merely stored here and should be ignored)
As previously mentioned, not much of a army (less than 200 figures total!) but twenty of the figures have seen service in Jimland as soldiers and slavers (and a Missionary!).

I haven't been completely idle in other matters, having been sparked by memories of past Pony Wars games, I dug around for my set of rules and the various charts and QRSs that accompany them; my task was, I am pleased to say  fruitful as I also came across a set of yellowed event cards that I had forgotten about. The ones I originally used were all hand-written on very small pieces of card. I photocopied the cards and laminated them to preserve them further and of course if I ever get the urge to play another game then they'll be cut out !


That's it then for yet another week , one in which my spirits have had a nostalgic lift.
Posted by Zabadak at 06:58