Another Venture into Jimland (Part Two)


From the Diary of Sir Charles Biddlestone
Day 2
"Awoke to find that we had lost two bearers in yesterday's fracas - oh well, neither were carrying food in any event!
I have also made the decision to allow the Askaris to return to Jimland in order to conserve food and allow the expedition to continue.
We set off South-eastwards, at a jaunty pace finding more swamp, we'll again have to rely on Henry, our Scout to find  a way out of this infernal swamp."

From the Diary of Henry Warton:

Day 2 (Evening)
"Upon entering the swamp there were no mishaps but we soon encountered a group of what I determined to be Arab slavers, intent on doing us harm; generally these fellows are well armed with rifles and unfortunately for us they were also numerous.
Whilst I hadn't detected them earlier were did have good cover immediately on hand.
Sir Charles ordered us into the cover of the jungle to set up a firing line, whilst the bearers huddled behind us."

"Reverend Tosson didn't even attempt to convert this group of slavers saying something about them not being convertible as they were "Spawn of the Devil"; he took up a central position.
So, on our right was Sir Henry, then myself, the Reverend, Frederick and finally Dave on our left flank.
We opened fire as soon as we were able" 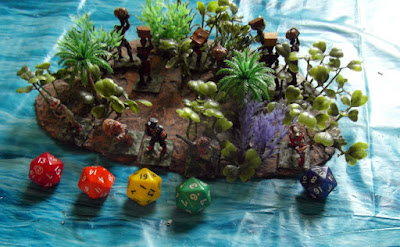 " Our opening shots were of mixed effect, with Frederick bringing down one of the cowardly slavers hiding in the trees opposite our position.
Our firing also seemed to have attracted a large ape that emerged from the jungle and  proceeded to attack Sir Charles.
Even whilst this was happening a general fire-fight broke out as the slavers returned our fire."

"Sir Henry wounded the great ape but then faltered and took a mortal blow from the creature, I immediately dispatched the creature.
The Slavers' gunfire also seemed to attract wild-life as a large lion seemed to take and interest in them too."
"Through all the gunfire I could only just make out Dave cursing that they had shot a hole through his lucky flask "
"The next I heard from Dave was a gurgled cry of pain;  I found out later he had taken a bullet through his chest"
"Dave's body crashing to the floor must have startled a  large spider which thankfully scuttled off in the direction of the slavers"

"The remainder of the action, strangely, went very swiftly. The slavers easily squashed the spider, I was struck by bullet from one of the slavers but returned fire killing him. The Reverend Tosson for an inexplicable reason charged from the protection of our treeline to attack one of the slavers; both he and his target were locked in a struggle to the death that neither survived.
Both Fred and I continued to shoot at the slavers, each of us potting one which seemed to each curb their enthusiasm for continuing the fight.
They withdrew into depths of the jungle and thus the fight ended."

"After supper Frederick and I summed up the day's event and its consequences. We were now a mere two explorers, we had 19 days of food rations and more than sufficient bearers on hand (seven). We would make our decision what to do after a good nights sleep!"

From my point of view it was a very exciting action, which originally I though the party would win easily, but the ape taking out my best shooter (Sir Charles) from my own duff shot set us back a lot. Losing Dave the prospector didn't help either for by that time we'd only managed to down two of the opposition and I needed five of them to drop before they'd skedaddle. It was about this time that I realised the Reverend couldn't hit a damn thing with his shooting skill of '2' and the modifier of  '-2' for the defenders' cover, so I decided he would charge them. He had a good save roll and a hand to hand skill of '10' whilst the slavers had no save roll and a meagre hand to hand skill of '4' and we desperately needed to start killing them! I did think the lion would have aided us, but he wandered off.
Next week will see the conclusion to this expedition's 2nd adventure

In other news
I'm back from my week-long holiday and slowly recovering; I haven't managed much painting, save the 300+ spear-heads and swords on my Sudanese, though I doubt you're bothered that I didn't take a photograph of this feeble progress. I've also made inroads into repairing my shattered terrain board, which should be finished in a week or so as I allow long periods of drying time.

That's it then for this week, I hope you've found something here of interest and as always your comments are welcomed and appreciated.
Posted by Zabadak at 09:07