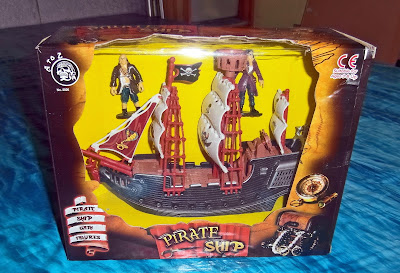 As promised last week, here's the toy pirate ship I bought via Evil-bay a few weeks ago.
I hunted down this model having first seen it on fellow blogger Ptr's site Hugg Och Slag a couple of years ago.
I must admit that on first sight it does look very usable (even more so on Ptr's blog), but unfortunately it's a little too small, even compared to the rather small toy ships I worked on recently.
Nevertheless I have a couple of ideas how I'll use it.
So here's what I found unboxing and 'disecting' the model:
It is quite an attractive model, despite its proliferation of stickers and very soft plastic bits (the orange parts).
There are no deck cannon, but the figurehead is good, as is the rear cabin decoration.

The figure included are of course oversized for the model (I do wonder though why manufacturers continually do this sort of thing - but I guess it's a toy thing).
In their defence the figures are easily recognisable as to what they're meant to be despite their lack of eye-patches and peg-legs! 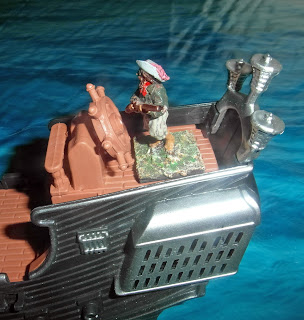 The relative scale problems can be more readily seen when a 28mm figure is place on board.
The photograph to the right show a 28mm figure at the ships wheel (fairly good sized wheel btw), but with little to no room for anyone else  - and stay away from those very low sides!
The problem is magnified when trying to get cannon on the decks (with or without figures), as the same problems emerge. 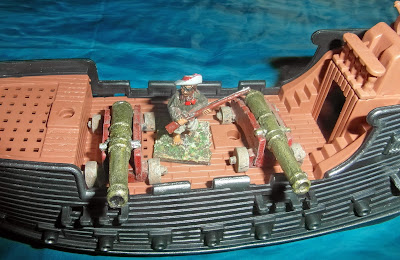 It should be obvious from the last few photo graphs that as the model stands, it's completely unusable in it's current from with 28mm figure, though I suspect that it would be an ideal size for use with 15mm figures *unless they too have also fallen foul of scale-creep)
I haven't completely given up on using this toy and have a couple of ideas how I'll use it,  after some severe conversion, so onwards with the dissembling...
So what are my plans for this ? Well it's obvious to me at least that it can't deploy a broadside of cannon, but could mount a couple of swivel guns or maybe a small chaser. If I use the original deck, it will have to have either raised sides (health and safety) or the deck itself will have to be lowered -(maybe a combination of the two)
The aft deck will have the ships wheel removed; in any event ships' wheels were not commonplace until well after the golden age of piracy and were introduced in about the 1720's.- Blackbeard probably never saw one!
So currently I have two ideas for this model:
Firstly turn it into a small civilian coastal vessel, a yacht, small sloop or similar, where the rear deck would be nothing more than a roof for the rear cabin (not unlike a Bermuda sloop)
The second idea and the one I currently favour, is turning it into a governors barge. The rear deck would be removed as above, the vessel would maybe have a lateen (slanting) sail on a central mast and  the gun-ports would be utilised for oars (Rollocks !  - no honestly they would!)
Of course I'm always open to suggestions.... (hint, hint)

In other news:
I made up my mind to complete the tidying up of my games room, now that the shelving had been sorted, so I now have a table usable for games, though currently I'm working on palm trees and jungle and may have to hold off on games - more on that next time.


Next time I'll be posting the results of some palm-tree experiments and the progress I've made on my jungle terrain, plus for the first time in over a year I've slapped some paint on some 28mm figures, though not Pirates (or Zombie related for that matter) - more news on that particular foray when they're finished!.

So that's it for this week, thanks for taking the time to visit and as always your comments are both welcomed and appreciated.
Posted by Zabadak at 05:30