Taking a rest from all things nautical I've made another assault on my church build and sundry other minor bits and pieces, all connected to my pirate project.
The last time I had done anything to this model was quite a while ago and then it was merely bare foamboard
As can be seen from the photo on the right, it's come a long way towards being finished.
The ridge tiles from on the main building and those on the tower have both been added as has a small building abutted on to the rear wall of the church, though not visible in this photograph..

The whole model was liberally covered in filler, using a very watery mix to give some texture to the otherwise smooth walls.
This would be later sanded down and leaves a very nice surface, though not smooth.
This filling procedure also helps to fill in all the minor cracks and joins that develop in any scratch-build model that I make!


The roofs were all given a coat of thinned filler and allowed to dry before any paint was added.
When the filler was dried, a dark brown was used as a base coat/primer to which I gradually dry-brushed lighter and varied colours, A dark red, a slightly lighter red, some yellow ochre,  a light brick red and finally some terracotta tile colour. (All £1 emulsion tester pots)
The body of the church is also painted with using another £1 tester pot tester pot and I'd forgotten just how long it takes to paint models!
The bits that weren't painted in he creamy yellow colour would be undercoated in grey and highlighted in white. Door colours are yet to be decided!
Other than the church I've started on the cannons needed for the three new ships. To fill all the gun ports I'd need 14 cannon, so I'll have to take a stock-take of what I have, but in addition I added the cannon seen on the right  and although I haven't a photograph I've undercoated and painted them up, with just some final highlighting and tidying up to do on them.
Four spools of garden twine from Poundworldbargainland I reckon gave me an almost lifetime supply of ropes, lines and cables that I'll ever need. Even though dark green twine is included it's easily made into a black tattered rope too (and of course there's always jungle vines too). 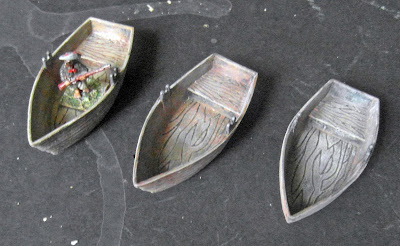 Finally in a burst of unparallelled enthusiasm I quickly  finished off the three rowing boats that came with the three ships in less than an hour (I know, it shows)
They're not the best models , but are usable and having looked at the prices of similar sized  resin ones I'm pleased enough with these.


The plan for the next week is to finish off the church, at least one ship and  a dozen cannon, all whilst I plan the necessary terrain boards (so far, a beach, a harbour, a rock (yeah I know) and a fort. In addition to which I'll also be planning a village to accompany the church and in a similar style.

That's it then for this week, I hope you've found something of interest and as always your comments , good bad or indifferent are always welcomed and appreciated.
Posted by Zabadak at 06:02