A Ship (and more) 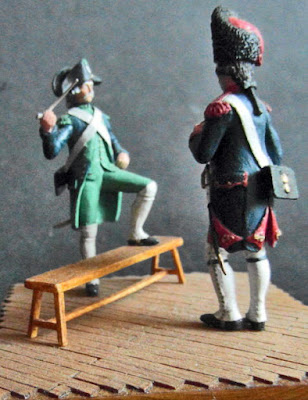 As real-life continues to deploy obstacles in my path to foil most of my attempts to do anything
significant on the hobby-front but I thought I'd show a vignette painted and assembled by a good friend that died earlier this year. Thanks to his spouse I've come into possession of a large number of his models (mostly 54mm), mostly painted, but some requiring assembly and paint. They include a fair number of the old 54mm Airfix figures and a large number of Historex figures. My favourite amongst all of them is a 7YW Austrian (currently packed away with his chums), but this particular vignette has been on semi-permanent display. and was thus easily accessible for posting about!
I can't tell you much about the two figures represented, but no doubt the more knowledgeable will know!
I can't foresee any time when I'll assemble (let alone paint) the large amount of figures and sadly haven't found a single one of my acquaintances that is interested in obtaining any of them .
Anyone that is interested, please get in touch! 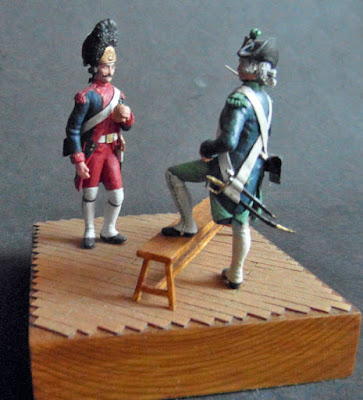 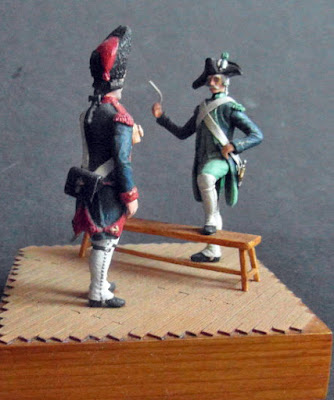 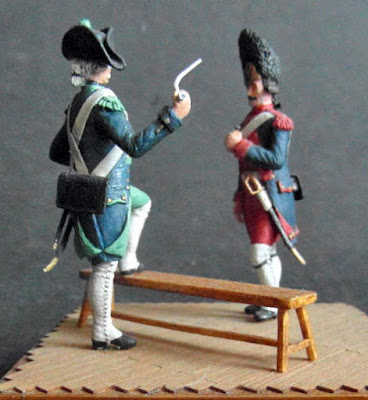 (As usual, sorry for the poor quality photographs, but I'm still unable to replace the photographer)

In other news I purchase a toy "pirate ship", for the princely sum of £10 from "The Works". I'd scouted this model but couldn't decide if it was a good enough size, so armed with a tape measure I went off and ended up buying one (now regretting not buying at least one more).
There's a fair amount of usable 'accessories'  including a 'longboat' (should have been called a shortboat) that wasn't apparent at first inspection.
Of course the figures are huge (about 60mm) and their weaponry and other things are completely unusable , but the model still has a lot to offer. I'm currently taking is apart, removing bit and pieces and deciding how I'll  progress with it.
My daughter's temporary residence within our household has had a very pleasant side-effect of her
being disgusted at the state of my paint-table and design to do something about it. I've ended up with a very pleasing set of drawers as the table (hiding and sorting just about everything I'd want hidden and sorted)  and with the additional bonus of being on casters, means it can be easily moved about, keeping my scalpels away from the inquisitive hands of my granddaughter (seemingly the two are not a good mix).
The helicopter that is prominent in the foreground is the only physical object I've been working on this last week and I've manged to make a little progress on the paintjob on it).
Most of my hobby-related progress has been using paintshop to design eight 'shops', (mostly originals) for a project I've been thinking of for a few years now.

And that's it, little to nothing done, but even a little is bonus to me atm!

Thanks for taking the time to visit and peruse what I'm up to and as always your comments are both welcomed and appreciated!
Posted by Zabadak at 04:44