Progress on my Sarissa large Factory has come on in leaps and bounds despite all the real-life issues that have befallen me over the last two weeks. I think I would have had it finished in a week or so (even given my slow work-rate) if I didn't want it looking a little more 'unique' and with more internal detail than was probably intended by the manufacturers.

The majority of the painting on the main structure (i.e. the four main walls) and the two external add-ons have all been finished too. (that is to say the stairs and small annex). I have a little painting left to do on the external brickwork and then the whole thing will be assembled.

The photo on the right shows how I assembled the external staircase to the inverted 'U' shaped gantry. I figured it would be slightly stronger in this configuration and would enable me not to have it separate (for safer handling).
Rather than paper to hide the obvious MDF joins I used thin card (cartridge paper probably) as I did with the smaller offices building. 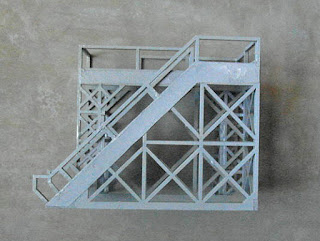 The gantry did need two of the railing cut and re-positioned to allow for this configuration and I did forget to file down the resulting 'lip' between the two pieces before I painted it all up. Doh!
Here's what it looked like after it's initial priming.
The card is hardly noticeable and well worth the extra ten minutes or so work imo.

The finished article has been painted in my usual style of 'grot', covering many of the mistakes, thumb-prints, dripped glue etc. primarily a blue grey (hardly noticeable I know) for the flooring, with yellows for the railings, all covered with a wash of dark brown for the grime aspect.
Some lighter brown rust effects were added to the structure too, but once more the cameraman failed to get a good shot of these.


The photograph on the left shows the roof and floor of the small annex, which I'll be designating as an office rather than the boiler house (so no chimney). They're sitting on the main floor (the base) of the building which after its initial prime spraying of grey has been used as a palette to clean my brushes on - hence the multitude of watered-down colours - it's an effect I really like, but I guess others won't.


Here's a close-up photo of the annex/office roof clearly showing the three bevelled edges and the straighter edge that will align with the main wall of the main building.
It's had my usual grey car-primer as a base colour to which I added a very dark metallic paint colour then a dark silver highlight followed by a wash of black.

Left is a photograph of the roof  of the main building in its currently; the state of which I'm not too happy about presently.
I've halved the number of windows by affixing card to them and topping them with another length of card folded into a 'v' for the roof ridge.
Initially I was going to have it fully 'glazed' so to speak, but the roof decided it was too flimsy  for such nonsense  and wouldn't play along.
Gluing in the perspex pieces was yet another example of piss-poor planning on my behalf (I should have done it pre-assembly); the thin 2mm MDF with glue added (initially making it weaker), the precise nature of Sarissa building (they're not called Sarissa Precision for nothing) combined with my inept stubby-fingered handling resulted in a pig's breakfast of a build. - But it will be sorted !


This next week will see me attempt to see if it will all still assemble into something resembling the  model I originally intended to build. I still have a lot (believe it or not) bits that have to be added to the model and the roof to attend to, but it is getting there. 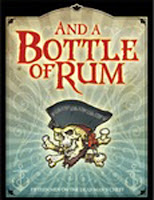 The more attentive among you may also have noticed that my reading gadget thing has changed to the THW pirate rules "And a bottle of Rum". I had these bought for me November 2015 along with "Free Ports" in one of the many sails sales that ED at THW has. (did you see what I did there).
Pirate games are one of those genres that many (if not all) wargamers have had an inkling to try - me included. (I posted about my own efforts in this direction  years ago  - you can see the post here)
Unfortunately I've never found a set of piratical rules that embodied all I wanted in  a single game, such as swashbuckling (the old Yaquinto game Swashbuckler did it for me), ship -to ship action (AH wooden ships and Iron men) and land combat. However these rules encompass all the major elements I like about pirates and what I like about THW rules in general (though I will of course be amending bits of them as I go along).  A major plus of the rules is that many of the ideas I'll be incorporating into my Zombie rules too (though I'll be avoiding  zombies in my pirate games).