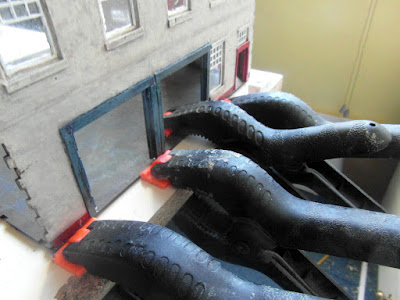 Well, what I thought would be a fairly easy exercise to assemble the basic four walls to the base turned out be something of a nightmare (I really should have known).
All the walls have a slight warp to them making them bow out a mm or so from the base.
Camping the base firmly to the table and using other clamps to force the walls to align with the base whilst glue dried was the answer, but took a very long time as I wished the glue to be really set before releasing the clamps - overnight for each wall was the time I'd set.
In the meantime I covered and painted the corners of the annex with thin strips of folded cards, to hide the obvious MDF joins (one of the features I hate worst off all with MDF buildings.

I also made some thin card pieces to cover the three ventilation ducts for later, undercoating and  paint. I used a slightly different method than I did with my previous MDF build and the result was far more satisfactory.
In case you're wondering why and hadn't caught this the first time, the shafts are made from three pieces of MDF sandwiched together and imo look awful.

After the four main walls were glued in place and the roof added, it was obvious that although the clamps had cured the  warp-age at their base it had continued to the roof, consequently making a 1mm to 2mm gap (slightly exaggerated in the photograph).
This was yet another feature I  hadn't experienced before, but with the 2mm MDF, plus thin card, plus glue and paint I should really have anticipated this happening.
Three pieces of card were quickly employed to cover the gap, more or less successfully.
Once the roof was in place another problem reared its head. 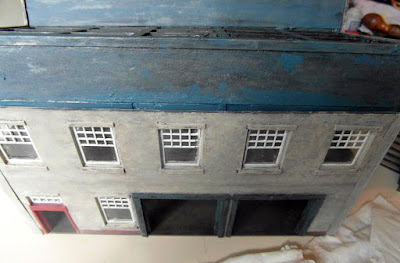 Another reminder that these are not called 'precision' for nothing as the roof was a very tight fit. So much so that I poked a piece of the perspex out to enable me to get a grip on the roof to lift it off. This is a minor niggle but one I haven't sorted -yet.
The photograph shows the quick roof-fox in place though not entirely pressed down into place (for ease of removal).


Other features went together really well, the annex/office glued into place (once more being held and pressed into place using clamps because of the slight warp), The four corners each had a thin piece of card added to them to hide the MDF joins and yet another piece of card was added half-way up the wall to reproduce the etched feature on the original model. This later detail had to be left until late in the build so as to fit the corner pieces too,
You can see from the photograph that I've also added the ventilation ducts.

The ventilation ducts didn't want to fit where they were meant to either, though I can't pin it down why - it was probably through my own inadequacy. There are three ducts, each with two fittings and following the trend with this one of the fitting had mysteriously disappeared into some void or other.
Luckily (?) because of the configuration I'd chosen for the staircase, I'd need one ventilation shaft less (yay!) as the stairs covered the intended location. In the photograph you can just see the top fitting hole to the right of the door.
Because of the way the walls sit atop the base, the base edges have no features on them, this wil be remedied with some filler to represent dirt and to fill in some gaps made by the walls lifting slightly during the time the glue dried on them . I have no-one to blame for this, save for my own tiredness and boredom in the length of time being taken trying to get this to the table.


I'm hoping to have this model finished in the next week, as I can't see what other problems it can throw at me.

So that's it then for this week, thanks for taking the trouble to visit and of course tyour comments and criticisms are always welcome.
Posted by Zabadak at 07:10