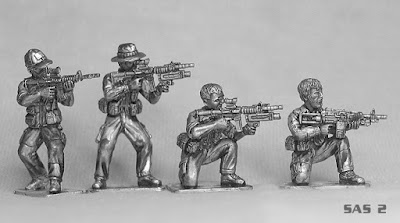 As some of you may already know I recently won a competition by Michael Awdry of the blog 28mm Victorian Wargames  to celebrate his blog's fifth anniversary. (If you aren't already a member or haven't visited his blog site yet, please do as it is not just about Victorian Warfare and inspirational in many aspects of our hobby. The prize was two packets of Empress Miniatures and an additional pack of Zulu War British from Michael's own collection. As a had no immediate use for the latter pack I declined taking the Brits and I'm sure they will be put to better use at Awdry Towers.
The two pack I chose were SAS2 and US7 (a special forces pack)
the order was placed on the 5th and I'd received them by the 7th (- what Service!).
I'd gone for these two packs as I'll most likely be using them as survivors and they seem to fit the bill nicely,  looking the least like they're wearing uniforms.

A word of caution if buying these figures, in pack 'US7' two of the figures are multipart figures, meaning you have to stick their limbs and some equipment on - no big deal unless you're as ham-fisted as I am! (The photographs btw are from the Empress Miniatures' site - I've not become David bailey overnight as my later photographs will testify to) 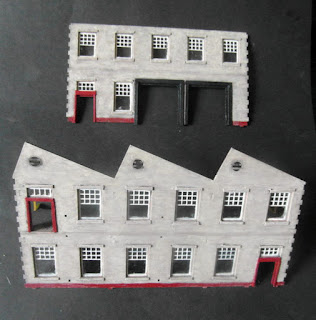 In other news I've been very busy working on my large Sarissa factory, which although not assembled has had quite a bit of paint slapped on it.
These two particular  walls have had both their external walls painted in what will be the final colour  (save for some highlighting and shading -  maybe)
The red door frames I went for mainly to contrast with the blue of the small office building. Whilst the large door frames will be a bluish-steel effect, a little lighter than shown. 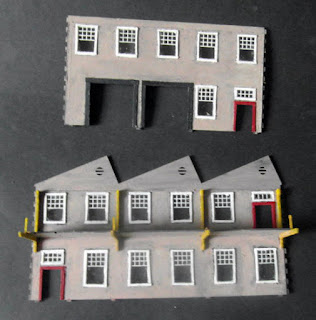 The internal view of the above two walls shows the complete window frames (as opposed to just the sills and lintels of their outside aspect and the yellow girders used to support the gantry crane. The parts for said gantry have yet to be punched from their original sheet - it looks to be yet another daunting task imo. 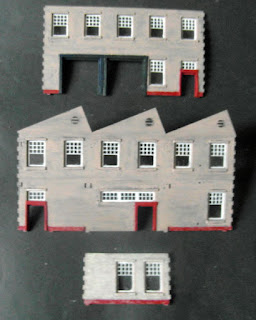 Of the remaining two large walls, neither have had any of the lighter sand colour applied yet, ( though there is hardly any noticeable difference in these photos), although the small outer wall has.
The photograph below (and the only one that doesn't appear to have been shot by a five-year old) shows the state of play on the internal walls of the three walls shown to the right.
Progress has been pretty slow, but despite being away at the weekend I think I've been making good progress,
I do think though that for those buying this particular model and not being as picky as I've been wanting some extra detail it could have easily been finished in a week. I'd also forgotten how long it takes to paint even a single one of the large wall, it seems to take me forever (about an hour). 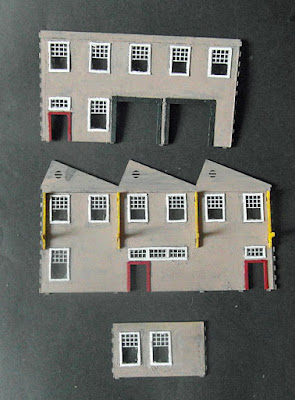 There's still plenty left do on the model, before its final assembly (which will no doubt be a fitting nightmare). I haven't yet looked  at assembling the outside stairs, though I am now happy with how I will assemble them as there is quite a few different arrangements that can be made.
The roof is also assembled and being painted (as well as being cursed, sworn at, altered and cut about) and is yet another long job (who said 'glass' is a good idea ?). The usual real-life distractions hinder progress, as do the more enjoyable hobby-related ones as once more my enthusiasm for all things piratical reared its ugly head in the form of series two of "Black Flags" on TV as a reminder of my  enthusiasm of the genre.


I'd like to welcome Damon Carlton who has his own new  blog "Surviving the Zombie Apocalypse" which is well worth a look along with another new zombie orientated blog "The Deadlands"  .

So, that's all then for this week, pretty thin fare I know but with these longer daylight hours I do feel a lot more productive.