This scenario is the second one in the Ganger series of scenarios from the THW supplement "Haven". The gang members from the previous scenario have to once more secure six buildings by searching them for occupants, accepting the protection of the gang or leaving the area.
This scenario at least had a definite victory condition of securing all six buildings, but I did allow the gang to have the opportunity to search the two buildings they missed on their first attempt.
The aerial view of the table shows the gang's starting position in the bottom right, shown by a red diamond, the buildings they had to secure, more or less in the order they intended to visit them and two of the more interesting encounters that occurred during the game. The blue line is their route.

The gang from left to right, "Gunny" (replacing the figure from the first scenario to one with an assault rifle), Hendricks  and the leader Jerome.
Turn one and immediately there was an event (getting a bit monotonous), but this time it was the welcome addition to the gang of another well armed gang member. - 'Yay' 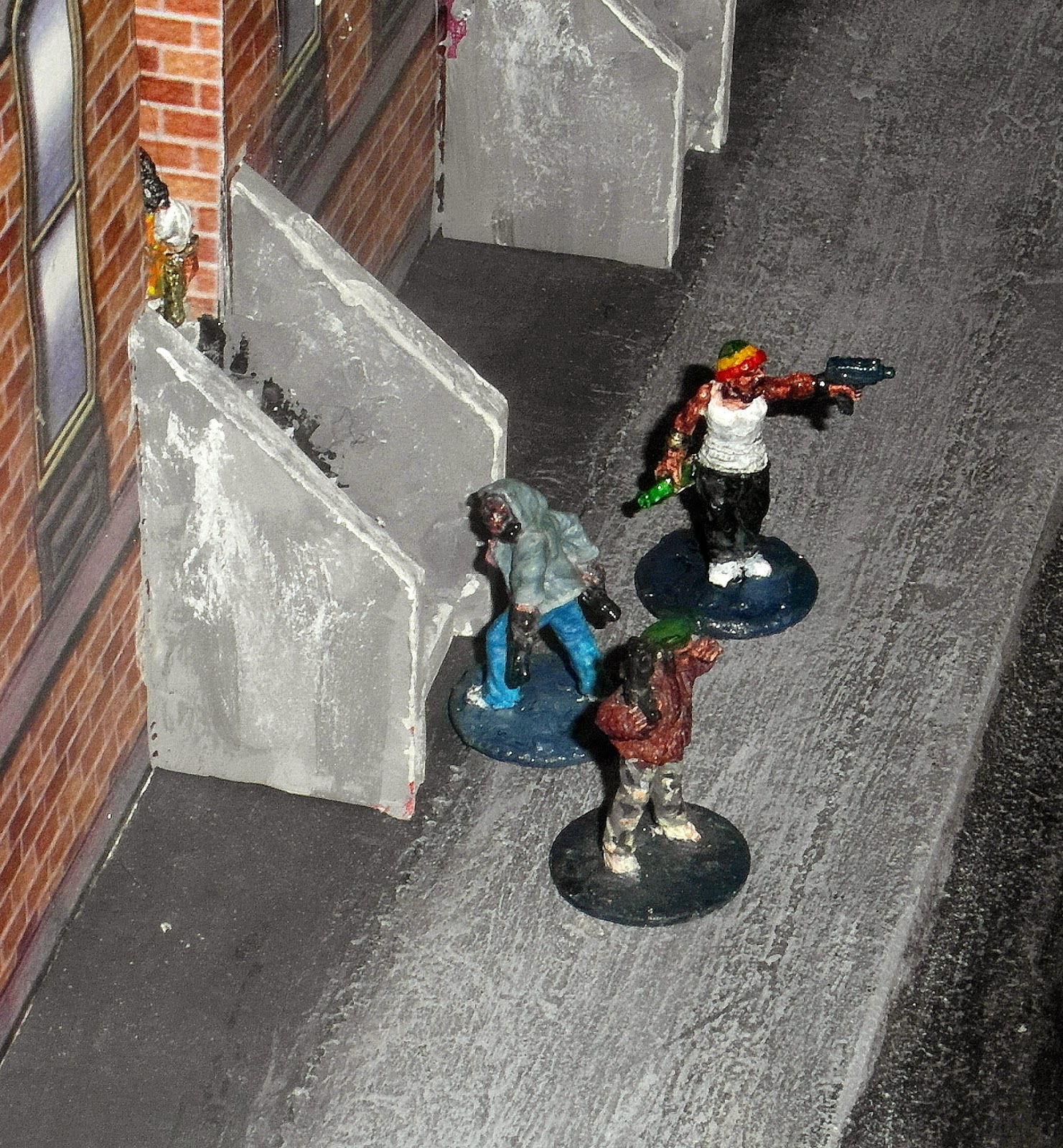 I allowed two figures to be actively i the doorway, even though I could only physically get one in place. The first house turned out to be a non-event, a rival ganger who immediately fled.
The second house proved far more lucrative for the gang as there were three civilians all eager to agree to the demands of the heavily armed gang.
The next house, one they hadn't searched from the original scenario turned out to have another ganger who quickly joined their growing band.
Two civilians were encountered as the gang carried on their searches, the civilians wanted nothing to do with the gang and vice versa.- Who could blame them ?

placing the figure from the first scenario to one with an assault rifle), Hendricks  and the leader Jerome.
Jerome decided they would all fight the zombie rather than risk gunfire attracting more.
Hendricks and the new recruit ( hastily named Michaela), both recovered from their duck back and attempted  a charged around the corner. Whilst Michaela succeeded, Hendricks though better of it and stayed put, soon joined by both Hoody and their leader Jerome. This left just  Michaela fighting the zed.
Barely winning the fight Michaela knocked the zombie down  whilst both Hoody and Jerome stay where they are Hendricks decides to pluck up enough courage to take a peek around the corner.
Gunny obviously has a case of nerves and heads for the hills. 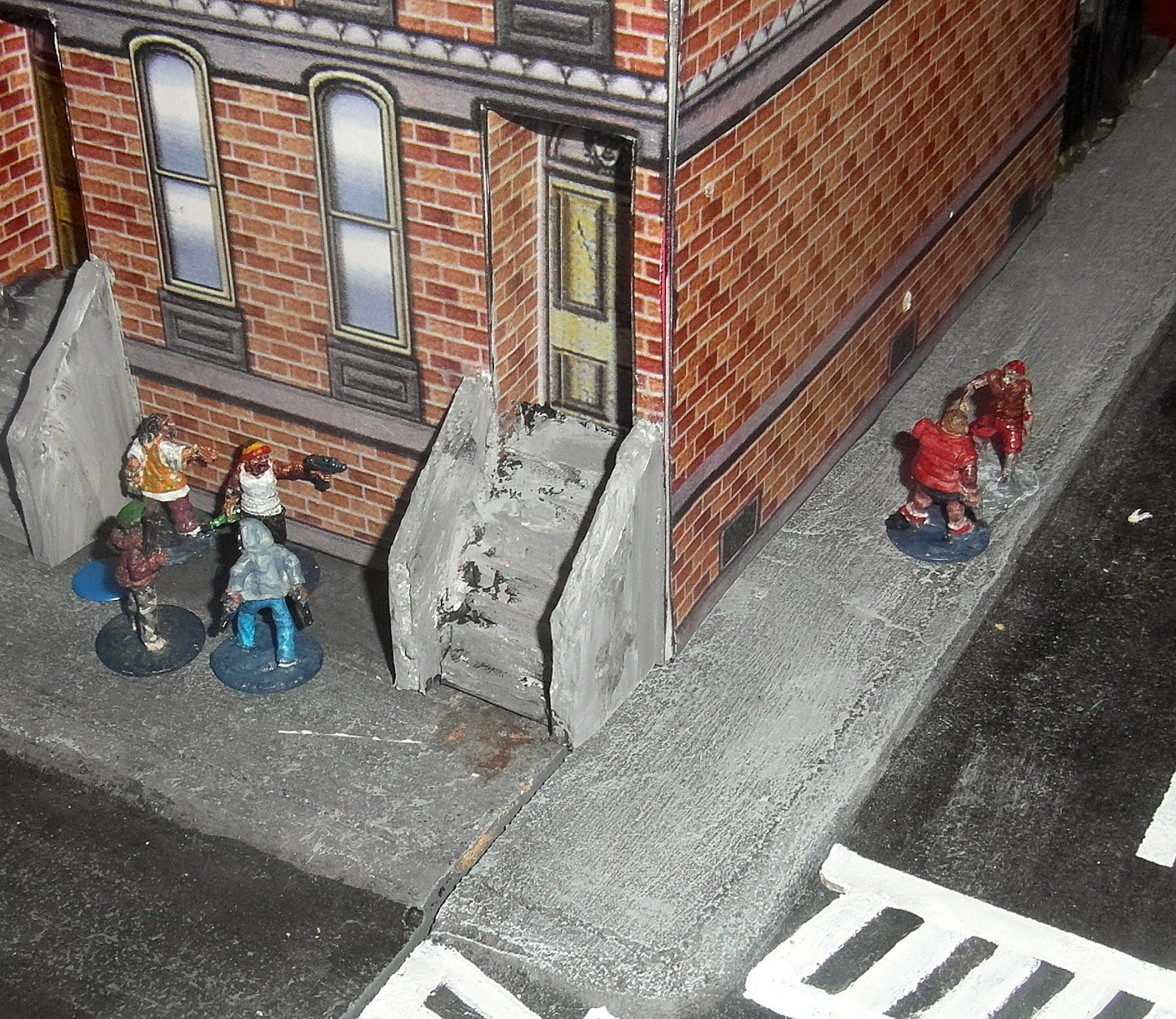 Before Michaela could act the zombie stood up once more; she was quickly joined by two of her friends ready to tackle the single zombie.
All the gangers' melee skills were about average and they all had a melee weapon too, but even their five dice against the zombie's three were insufficient for the first melee as Hoody went down under the claws of the zombie and with a roll of a '1' she was doa. The remaining two melees went off much better and the zombie was dead for good this time.
Seeing their fellow ganger go down didn't seem to have any effect on the remaining gangers, as Michaela searched the body and Jerome and Hendricks made off to investigate the last house.
They had to quickly do an about face as Hoody stood up as a zombie (each turn I throw a die for each dead character to see if they 'turn', this one did on the first time of asking !).
Michaela luckily dispatched the newly formed zombie and all three quickly went to the last house.
The last house had a single civilian in it who quickly fled the scene and that was the last action of the game.

An interesting, if fairly uneventful scenario saved by the little action that there was at the end.
Rather than plunge into the third scenario, I decided to make a ganger scenario of my own that will be the next game I play.

That's it then for this week a little later than planned for various reasons.