These are some other scenic items that I made whilst watching the World Cup, though to be fair, they were made at the same time as my sheds. They were finished and painted recently though whilst I was bored, due to the lack of football.
They're all made very much the same as the last car wreck I made (here). 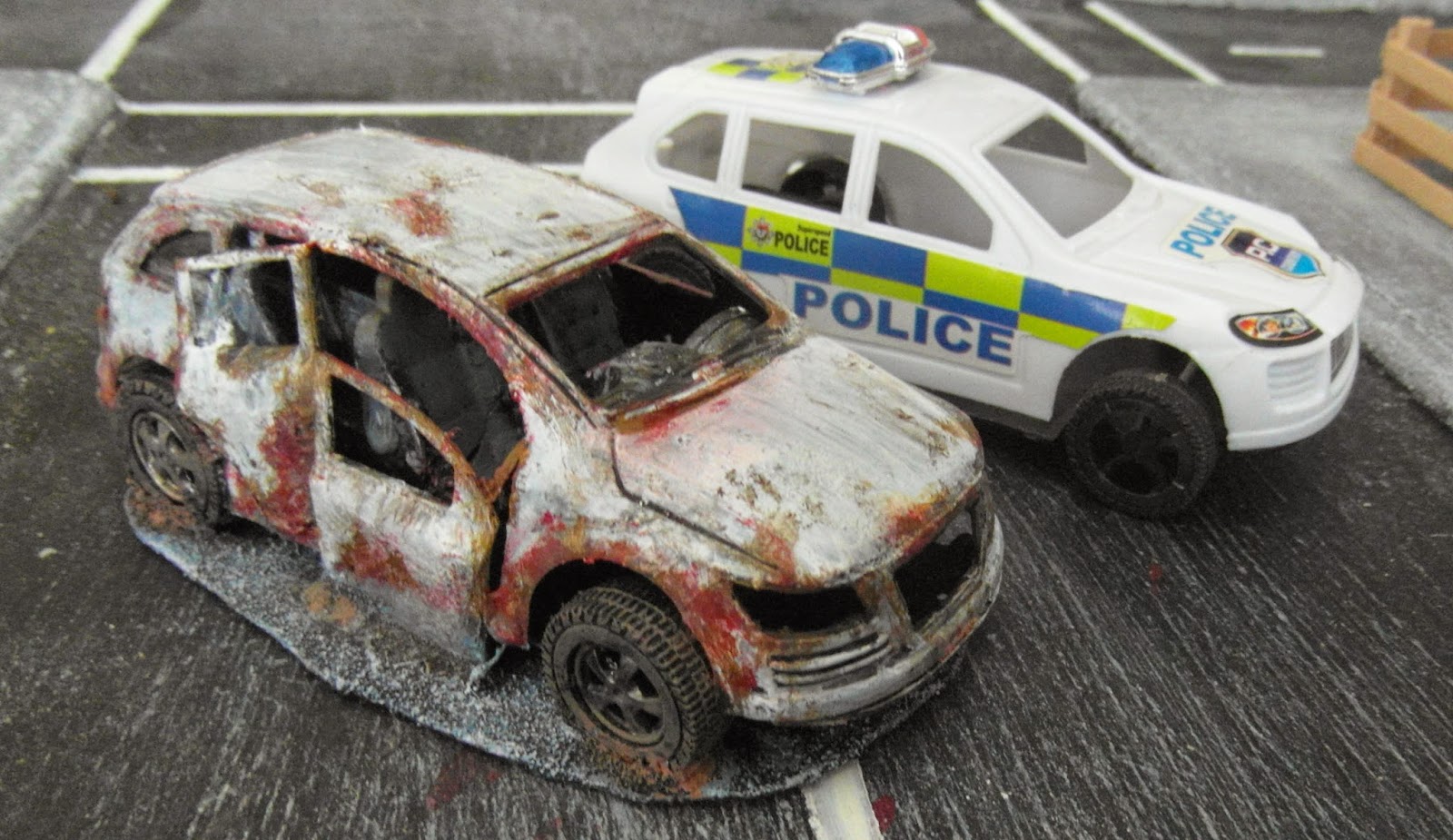 The first vehicle is actually the same model that I used in my previous attempt at a wreck (they're 3 for £1 in Poundland).
As previously I've removed the flashing light and hidden the resultant hole where the lights were. 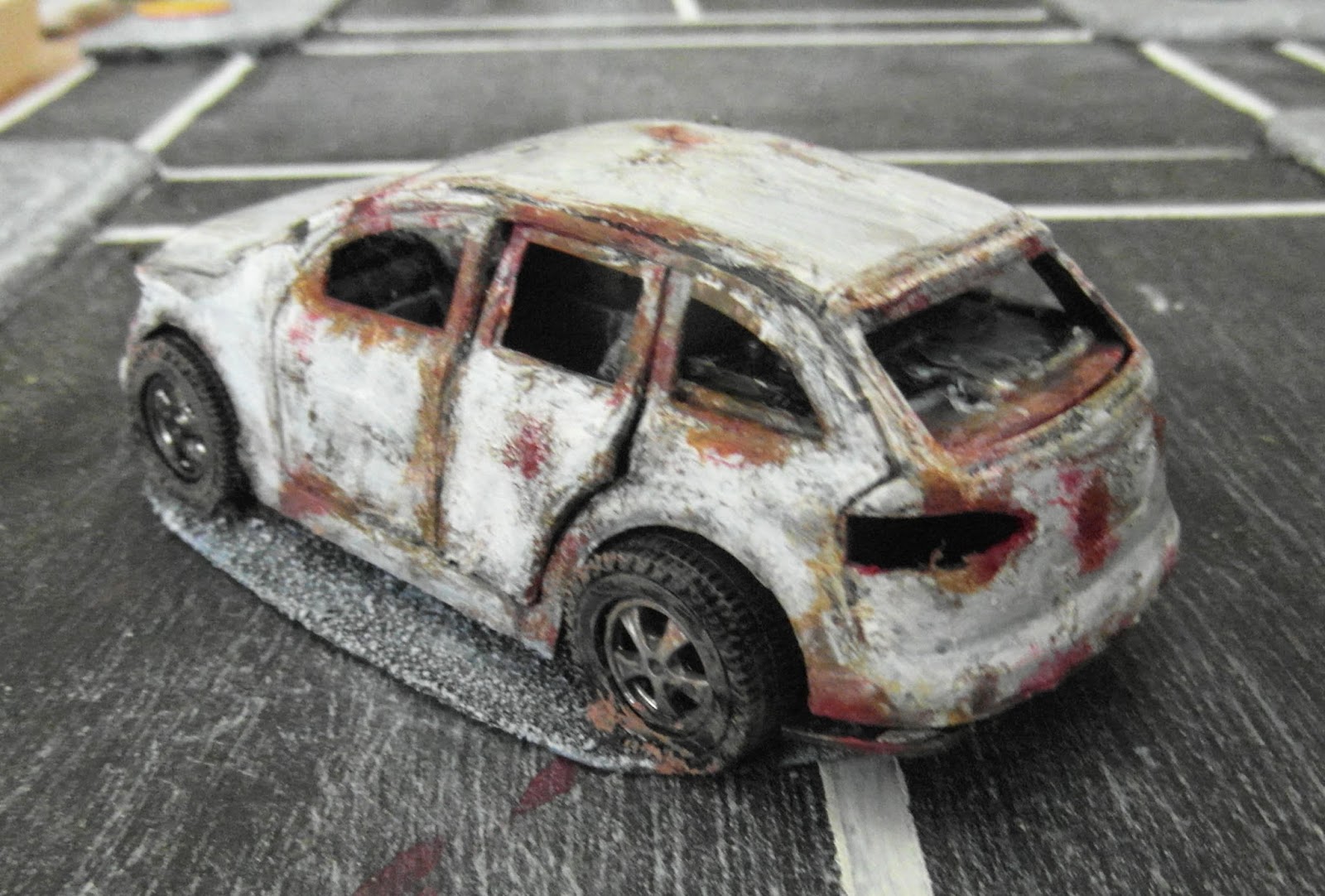 Once more I've taken a scalpel to various doors, car-lights and so forth to get a more wrecked appearance. the main difference with this and the last model was the interior. I used the interior that was with the car for the most part, but I did cut away the rear engine and replaced it with a piece of card.
All four tyres were filed down on their bases to represent flat tyres, but this hardly shows on the finished model.
After all the cutting and gluing (this soft polyethylene is a pain to glue) there were probably a few more gaps in the structure than I 'd have actually wanted, but as it's a wreck it's not that important. 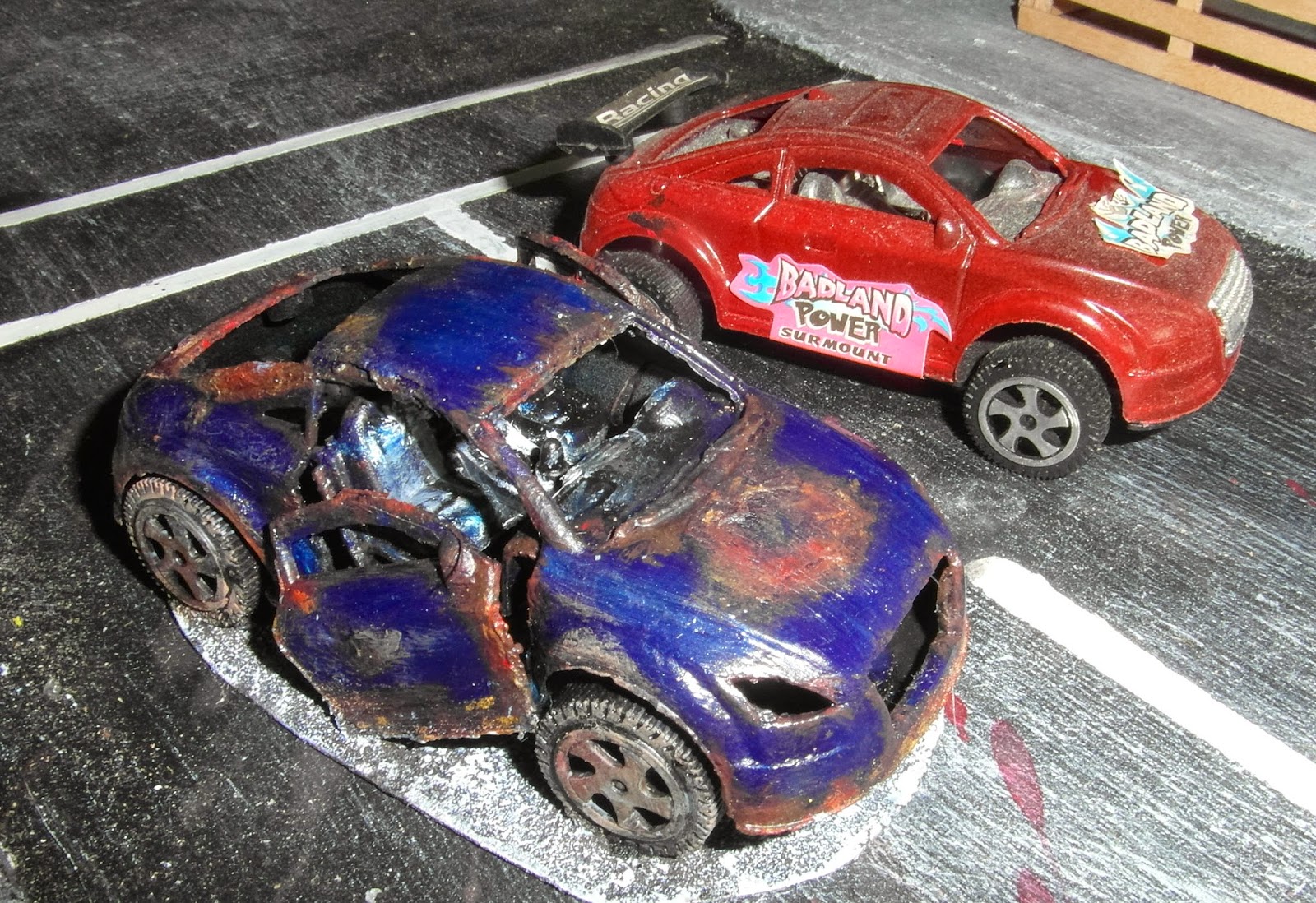 The second vehicle shown comes from another pack of either four or six vehicles. This one had the same treatment as the one above, doors cut out etc. Unlike the first, where the sticker/transfer/decal things came straight off, the ones on this were very stubborn, so they were taken down as much as possible then used for texture to add rust to.
The wheel base of these was slightly wider than looked right so I also took a pair of pincers and cut them to a more acceptable length. 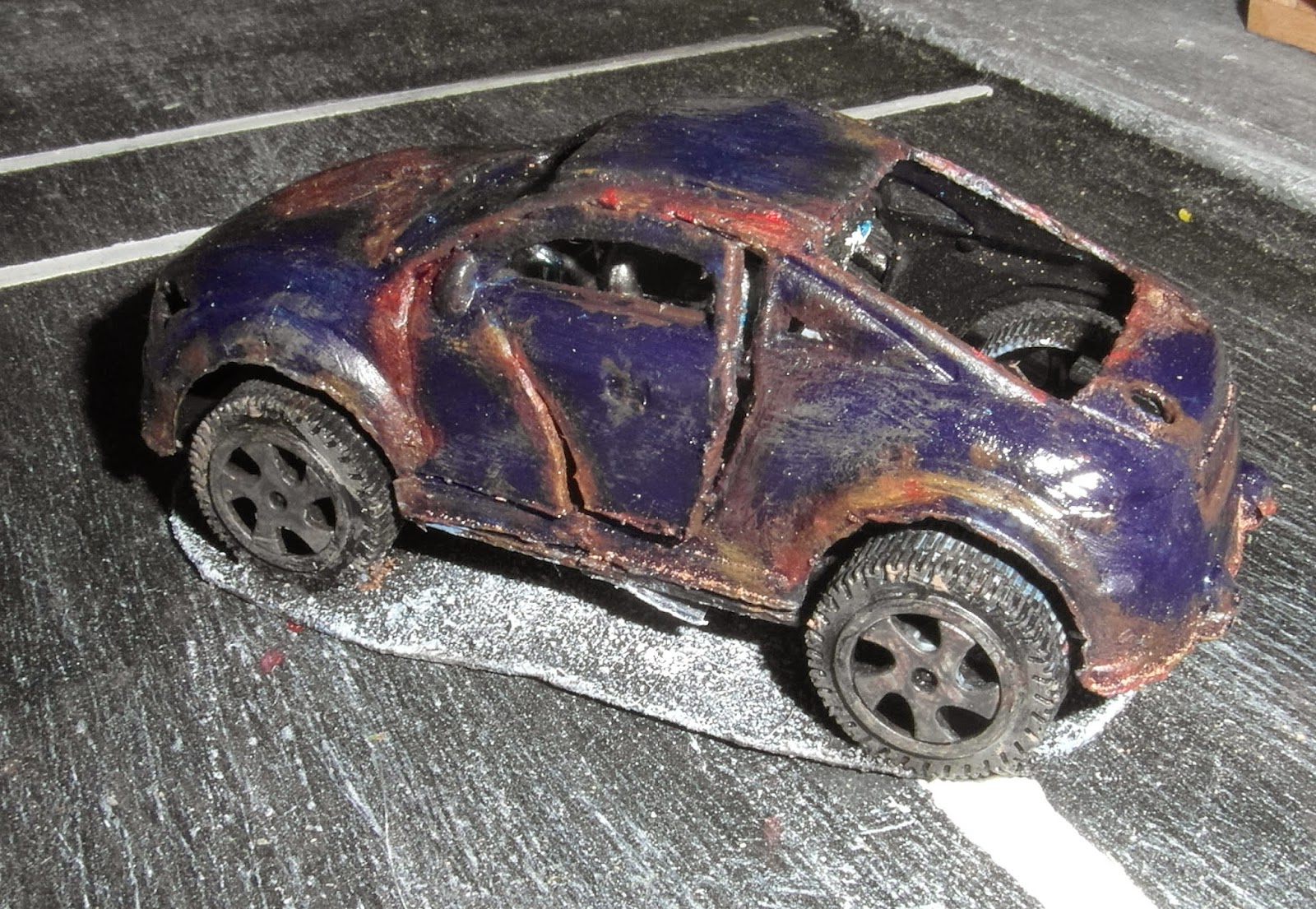 The rear "door" was lost in the making (turning up when I'd finished what I'd been doing to this of course) and left a gaping hole after I'd once more cut the engine out of the back.
I have since thought though that I could get a figure in the back - just.
The left hand driver's door cracked in the process of cutting it away, this was left as it was.
I had contemplated putting some fake smashed glass in some of the windows of all these models, but the effort outweighed the benefit, after all, these are wargame models primarily, for my own use and meant as nothing more. 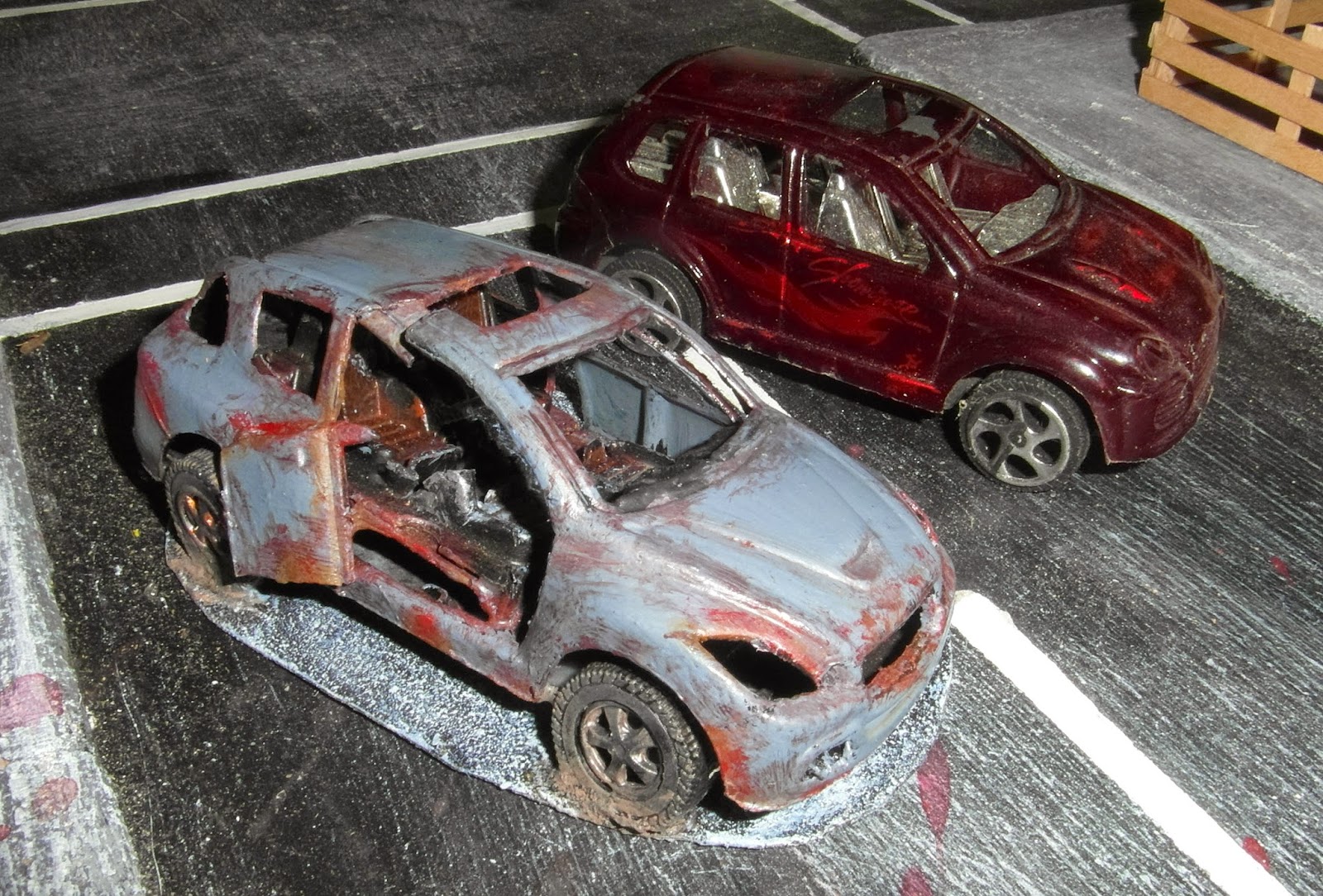 The last model shown here has had the same treatment as the other two, except the inside piece has had the two front seats ripped out.
I had thought that I'd add a small piece of detail to the inside by putting a model mattress or maybe a sleeping bag across the front seat, but once more I decided the effort just wasn't worth it.
Like the sporty looking car above this vehicle has a sun-roof already cut out; I covered the one in the sports car, but left this one as is. 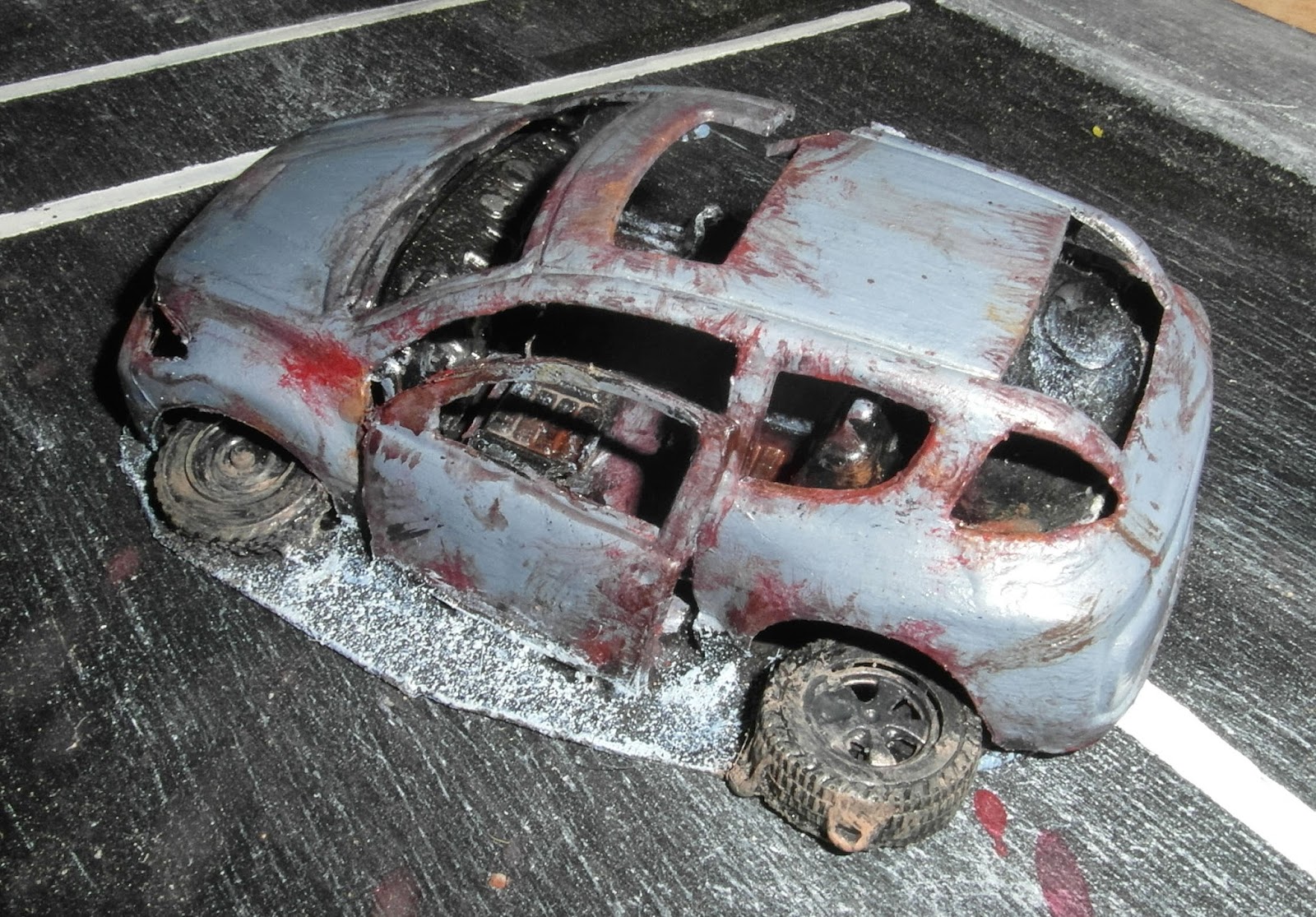 For variation I made this one a little different from the other two in that I decided it would be leaning on its side having had two wheels come adrift and I was quite pleased with the result.

All the models were disassembled, sprayed black then given their base coat of paint.
Further painting consisted of rust patches in various browns to each vehicle and the minimal possible amount of detailing to their interiors.
As these were meant to represent street wrecks, very thin card was used for the smallest bases I thought I could get away with. The bases were coated in PVA and had a sprinkling of sand over them to give them texture and then painted to match my roads.

At a cost of less than a £1 for all three and minimal effort on my part I'm pleased with the result.

As always your comments are both welcomed and appreciated !