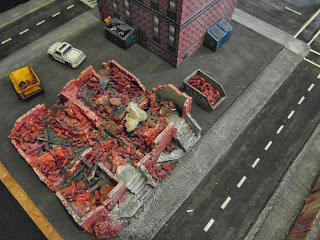 So the scenario was all ready to go and the encounter rating was set at 6 - the highest. Each turn a d6 would be thrown and a result of '6' indicated an event occurs ! 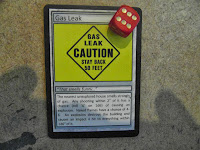 So, Turn 1. With my son throwing the dice and using Colgar6's excellent event deck (Colgar's blog can be found  here) I shouldn't have really been surprised that an event occurred immediately. - a gas leak ! It was diced to determine which of the likely locations (buildings, the construction site and demolition site) were the source of said leak and it was found to be the demolition site. 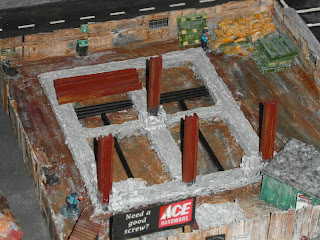 Next we determined initiatives Zombies 8; Security Forces 8; Emergency Responders 4; Civilians 4; after a dice-off, our "dashing heroes" the security guards would go second.
The dead paramedic in the ambulance turned into a zombie (he needed a 6, thrown each turn) and Zombie Ivor immediately attacked the ambulance driver. His three dice were more than a match for the driver's two (he was penalised a single die for being strapped in and attacked from the rear) and in the resulting melee he scored two successes whilst the unnamed driver managed none - the driver was killed instantly (an obviously dead result). 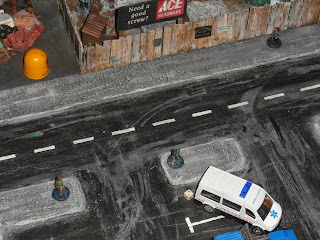 Next up, the security guards went about their business patrolling and eating donuts, they'd been hearing sirens all day and weren't bothered by yet another one.
There were now no responders but their ambulance was still speeding along uncontrolled and the dice indicated that it would swerve 45 degrees to the right.
The resulting crash at a speed of 2 would probably had killed the driver anyway had the melee not already done so.
The civilians, went about their business and two more arrived on the table (even though there was a greatly reduced chance of this happening), along with another civilian vehicle.
As seemed to be the way of things,  the crash seemed to attract the new civilian activity.
Turn Two arrived with yet another Event !
Luckily though the event wasn't relevant to this encounter at this stage and was ignored.
As previously, initiative was diced for giving the Zombies 7, Civilians 7 and the Security Guards 5.
Zombie Ivor feasted on the driver whilst the now new zombie in the ambulance staggered to its feet.
Civilians moved according to dice scores, resulting in one chap wanting to get closer to the action and another stood and gawked at the crash. Yet more civilians and vehicles were uncannily drawn to this corner of the table. 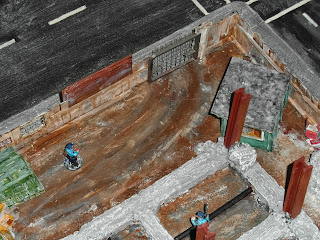 The security guards were obviously now aware of the crash and began to take an interest in the events outside their compound, even if they did so at a leisurely pace. (There must have been a rule about no running on site).
Turn 3 had the two security guards arguing about whether or not to go and see what happened (the first '1' of the game thrown for initiative) whilst the zombie feast now had two attendees.
The civilians near the crash site had mixed reactions,  a woman stopped to rubberneck and another rushed across the carpark; a chap with a briefcase rushed as quickly past as he could whilst the man in a hoodie, stood at the back of the ambulance decided to call the police. 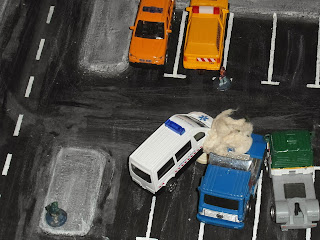 More civilians arrived on the table sufficiently away from the action that it would take quite a while for them to affect it, if at all.
All the civilian actions were dealt with by throwing dice; those in the immediate vicinity of the crash had logical choices made for them dependant upon how many dice they passed.
Basically it was along the lines of : Pass 2 dice something positive; Pass 1 die - a passive attitude and pass 0 dice gave a negative result . 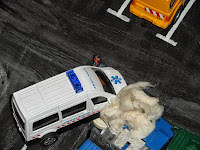 Turn 4 had no event, but had the Civilians acting first, then the Zombies and finally the Security guards.
One civilian approached the  crashed ambulance having passed her brown trouser test, whilst hoodie boy continued to watch. Other civilians and vehicles were diced for with a solitary vehicle making it's way to a call-out.
Those not in the immediate vicinity of the crash carried on.
The zombies continued their feasting malarkey in their cosy ambulance.
The two security guards sauntered over to the gate nonchalantly. 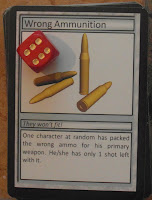 Turn 5 heralded yet another event  - wrong
ammunition ! One of the two characters involved would find that when they came to fire their gun (if either of them ever did) one of them would find they the wrong ammunition and had but a single round !
The zombies would start this turn wiping their lips having finished their evening supper (the feast ended). Their next course was just outside and all they had to do was get to it (they failed this turn but did manage to smash through the door and broken window of the Drivers side).
One of our two "dashing heroes" decided to take a leisurely look at the scene, whilst the other muttered something about not leaving the site.
Of the three civilians at the crash site two stood and watched whilst the closest one quickly made for cover, having peered inside the ambulance and witnessed the zombies feasting.Yet another emergency vehicle entered the table, following the previous one but still not the one  that the civilians had called earlier.

Turn 6 had little going on in real terms, the two zombies flopped out of the ambulance,  through the shattered driver's  door,whilst the zombified ambulance driver still didn't turn. The security guards decided to stand and argue (another '1' for their initiative), the woman that had previously ducked back decided she's had enough and fled whilst the hooded character at the rear of the ambulance   was revealed to
be John Adam, a relation of Ivor who had just appeared wailing and covered in blood from the ambulance! John was stunned, having recognised that his brother was now a zombie and immediately ducked for cover whilst other vehicles and pedestrians went about their business whilst the cops turned away from the action at the first opportunity.
Thankfully Turn 7  had no event and saw the two zombies
again moving first,  heading towards the single security guard outside the site, he in turn edged forward to get a better look and his colleague ventured out of the site whilst the others around them seemed to be fleeing in horror. The most significant event though was a civilian's silver car that had been placed on the table the previous turn heading straight towards the two zombies. The car was now just under 6 " away from the zombies and hence had to take his "Zed or no Zed Test" (he passed and recognised them for what they were), he then passed his "Brown Pants Test", and then we decided his actions using our "Have a go Rule", which he passed with flying colours ! It was decided he would accelerate to speed '3' and aim for the zombies !
Only three photographs were taken for the whole of turn 7, all of which concentrated on the action of the silver car ! The driver took a "Lose control Test" after mounting the kerb and hitting the zeds (passing easily). The result of the collision was that one zed  was mush and the other must have taken a glancing blow and was knocked down. 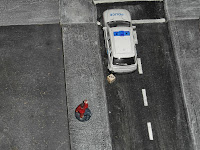 Turn 8 had no action to speak of as the two  Security guards decided once more to stand idle (another '1' for initiative), The remaining zombie stood up and the potential zombie (the driver of the ambulance) still refused to turn as he would the remainder of the game. The Cops that had been called earlier finally arrived on the table though, just a street away from the action whilst various other civilian vehicles and pedestrians did arrived but were welll out of the action area.  The civilians in the immediate area of the zombies were now all beating a hasty retreat or fleeing. 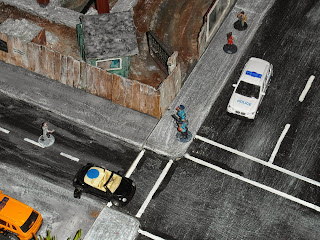 Turn 9 had the zombie moving towards the nearest security guard who, recognising the zombie for what it was, bravely retreated to the corner and was there joined by his colleague.  Yet another civilian vehicle entered the fray, the driver being shocked at what he saw deciding to duck down whilst the cops continued there race to the crash site. (the blue counter in the vehicle represents the driver being stunned).
Turn 10 and the zombies moved first, heading of course to the two security guards, causing a "Zed or no Zed"  check for the second guard, which resulted in him ducking back into the site entrance. The cops slowed turned the corner and slowed down, but both were stunned to see the zombie which caused them both to duck down in their seats.
It now came down to our "dashing hero" shot.
Would he hit ? Would he be able to get a second shot off ?
Had he packed the wrong ammunition ?
The answers weren't favourable, he didn't hit (he did have a 50% chance to do so) and he didn't get his second shot off as he had packed the wrong ammo (determined by a die roll).
Turn 11 had the civilians moving first but taking no actual part in events. The single zombie attacked before either security guard activated and in the melee that followed downed the security guard. 3 dice for the zombie beating the four dice of the guard. The impact of the melee was rolled, a '1'  and the security guard bit the dust, to become a zombie at some later date.
Turn 12 had the security guard moving first and now recovered sufficiently to peer around the corner and take a couple of shots against the zombie, but he hit and killed the zombie with his first shot.
At that stage we called a close to the game.
The security guard would take another ten turns before turning and the driver of the ambulance would take twelve which was far too long a period to wait for more action.
The game worked well in our opinions, even if it was a little low key and took about three hours to play.
"But who was the dead guard ?", I hear you say - the dice decided it was the unfortunate Russel Francis.

And that's it for this week it just remains for me to welcome my latest follower "Matt", I hope both he and my regular followers find something here of interest.