I was going to go with "Wreckage" as the title for this week's blog, but it sounded a bit too grandiose for what actually is just a car wreck.
I originally had a completely different idea for this vehicle, involving the removal of transfers (decals) and a re-paint, but this was shelved after the chassis broke and I was left with a shell of a vehicle. 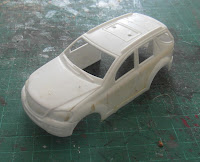 The original vehicle was from a pack of three soft vinyl police cars from Poundland (of course).
It was stripped of the chassis, it's emergency lights and all its transfers, leaving just the shell shown on the left.

It didn't really matter much if bits of the glue backing the transfers remained as these would give texture to the model.
The next stage was cutting out all the lights and the top where the police lights were plugged into the model and it would act as the hole where a sun-roof would fit.
The car body was soft enough for me to cut the door on three sides so it looked to be in an open position, but I could just as easily have cut the whole door out.
I also cut a piece of polystyrene to the rough dimensions of the vehicle and bevelled off a piece of scrap plastic for the base.
The polystyrene was to substitute for the destroyed interior of the vehicle. 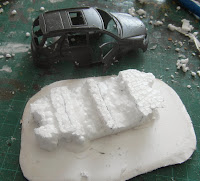 Photos showing the shell of the car undercoated with grey primer inside and out. and the polystyrene, roughly cut to represent the internals, glued to the base.
(The large notch in the polystyrene was to accommodate the lug inside the car that the chassis plugged into.)
The two photographs below firstly show the internal part gunged with filler and given a spray of primer and the second shows both parts of the model after being given several black washes. 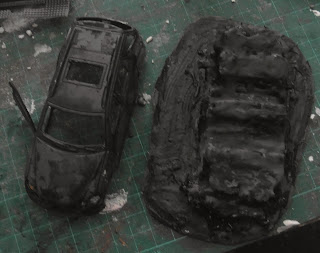 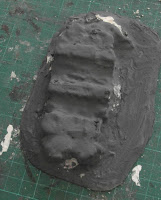 (The bits of white showing are due to fitting the shell over base.) 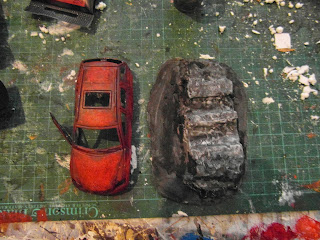 The internal piece was given some highlights in greys whilst the shell was given its base colour of red, which is showing much brighter than it actually was. 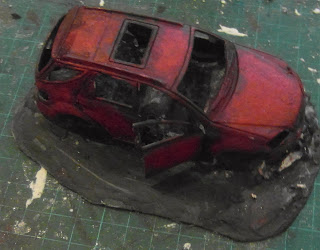 At this stage the two pieces were glued together, before anything else was attempted. 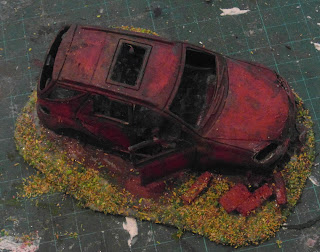 I used many shades of browns and ochres  to represent accumulated rust and to generally dull down the model.

To the base was added a few bricks and flock (neither of which I'm particularly happy with).

Finally I gave the finished model a couple of thin coats of matt varnish.


As I never worked on this for more than 30 minutes at a time I think overall I took less than maybe 4 hours to complete, which doesn't include time between each stage where the model was drying - the photographs only span a range of 6 days !

That's it for this week, I have started another, larger, scenery project and next week will probably be a WIP report but I'm also planning another game to once more introduce new rules to my games.

Once more I welcome my latest follower "Pitac" and here's hoping both he and my regular followers find something of interest here.

As always your comments and both welcomed and appreciated, without them I doubt I would have got this far.
Posted by Zabadak at 05:56