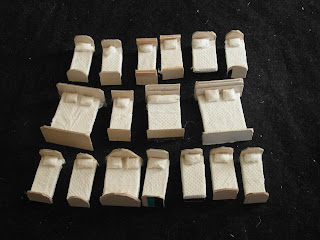 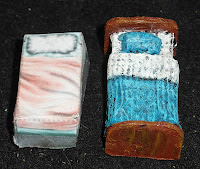 These last few weeks I've been fairly incapacitated with back problems, necessitating large periods of time lying on my back to recuperate. Progress on my zombie project has been next-to nothing, but a couple of months ago I made the prototype for some beds I would be making. Since then I haven't had the opportunity to show the progress I made with them, until now.
The top two photographs show the prototype (and a WWG bed) and the batch of beds I made. 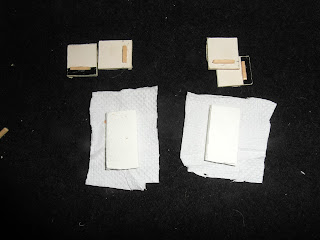 Construction of the all the beds followed the same pattern, more or less with a bit of variation here and there.
The body of the bed was a piece of foamcard, though any similar material would do, corrugated card or cork tile for example.
This was wrapped in a piece of tissue. I used both toilet paper and kitchen roll as they have different patterns on them and are very useful aids to detailing the models. 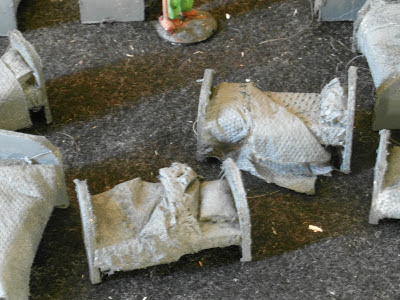 The headboards and foot boards are a piece of card with a short bit of matchstick glued about 1cm from the base, this will support the body of the bed. For the pillows I rolled some tissue into a "sausage", glued and cut it to the size of the pillows I needed. For the sheets and blankets the tissue was cut into a strip about the length of the bed them wrapped around the bed and glued in place (mostly on the underside of the bed's body ). This phot shows some of the tissue texture and the rolled tissue used for pillows.

Not all of the beds I made were in pristine condition, looking like they had just been made, because that would have been fairly boring, even if a little easier to do.
I found that having to design different headboards for variation much more of a pain and I ended up with quite a lot looking very similar, if not identical, but it doesn't really bother me. 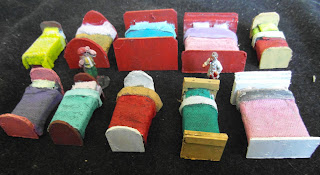 What does bother me, the bit I don't really like about having made all these things, is having to paint them !
Here's as far as I got painting them, before boredom set in and I had to move onto to something else. The idea is that I'll finish of individual beds as I need them, they mostly need shading highlighting and varnishing. 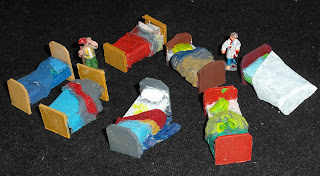 I'm really not that creative with my colour combinations  and en-masse they all look very samey, but individually I think they're OK.
Currently painting of any sort other than with a three inch brush, has had to be put on hold as my eyesight  have deteriorated enormously in the last nine or ten months,  probably due in no small part to age and accelerated by the medications I'm taking. So, in the next two months or so I expect to have two operations which should enable me to see what I'm painting once more !

That's it once more for this week it only remains for me to welcome my latest follower Shintokamikaze - "Welcome !".
All comments are, as ever,  welcomed and appreciated.
Posted by Zabadak at 08:35