Well the shenanigans of the weekend are over and I still managed to get some reading in on the journeys to and from the wedding of my eldest.

There are currently two books in the series "Surviving the Dead", the first "No Easy Hope" was a decent enough read with plenty of action.  I don't normally like the main characters being almost super humans but it probably makes sense that those better trained would be the more likely to survive an apocalypse. Mike, the central character may not be one of those superhuman  types, but he comes close (and his buddy Gabriel is almost certainly super human).   The story follows the more or less normal formula of a lot of zombie novels but that doesn't detract from its worth.
What does detract from the story is the apparent lack of editing and proof-reading  that runs throughout the book; what should have been an excellent read became a bit of a chore in parts.  The characters however were interesting and well presented enough that I wanted to follow their story so I've also read the sequel "This Shattered Land".   I wasn't to be disappointed by the sequel, but again the book suffered from editing and proof-reading.
"This Shattered Land" is set two years after the outbreak and again is a decent enough read, so much so that I'm looking forward to a third book in the series.  Whilst the first book has the objective of Mike getting to his friend Gabriel the second book has them together at the outset.  The second book's ending has been obviously set up for a third volume in the series.  Both books score a 4/5 on my scale but they both border on the lower end due to their poor proof-reading.

What was left of my week has mostly been taken up with being ill, so that all I managed to do was a little more work on my urban terrain boards, which will feature in this blog in the near future.
With the two dozen zombies that featured briefly in last week's blog my zombies have now officially reached horde status as there are now over one hundred of them. 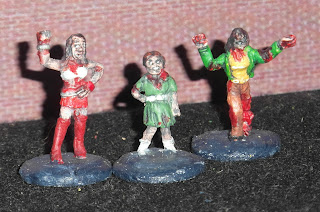 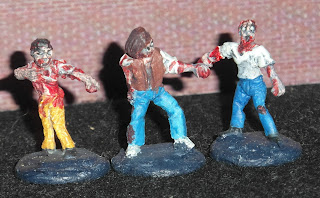 Here are some individual shots from the group that featured last week, all are MegaMinis.

The girl in the centre of the group of females has a kitchen knife hidden behind her back - smart zombie or what ?

The three zombies in this next photo are nothing remarkable but the left-hand one is quite animated in trying to rip his clothing off . 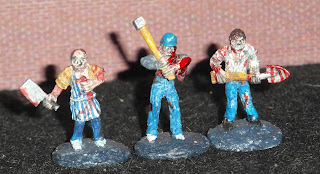 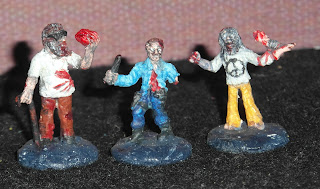 These three are among my favourites out of this batch even though they are all carrying weapons (maybe that's why they're my favourites?).

Two hippies and a cop - sounds like the title to some cheap Aerican sit-com.  The cop is a poor figure, his nightstick looking more like a black salami sausage.
The hippy on the right is actually holding a leg in his left hand though due to the expertise of the camerman this is snot completely evident.
The hippy with sun-glasses on the left however is holding a brain and has obviously been  type-cast as a typical zombie.  It may have been more amusing to paint him with a white stick and to claim he was blind ! 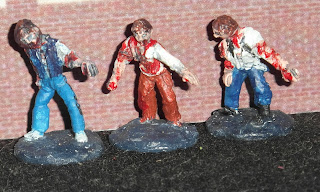 "Zombie line dancing at its best" could be the caption for these three.

There really is nothing much to be said about these except that they're no very good figures, but they will do to bulk the horde out. 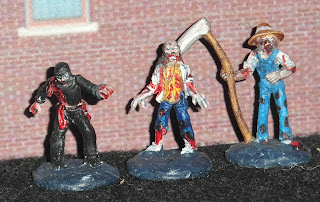 We now come to the good, the bad and the ugly, but as to which is which I'll let you the reader decide.

The zombie ninja is amusing if nothing else, as is the farmer.

The centre zombie though is another one of my favourites - there's plenty of detail on the figure and he has a certain character  about him. 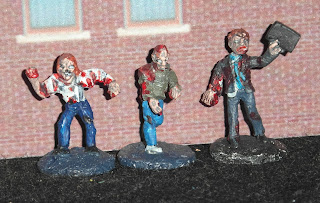 These three again are nothing really special, but does the briefcase on the third figure count as a weapon ?

The central zombie is another of those that could be the zombie version of one of the MegaMini civilians, although I didn't realise it at the time of painiting the civilian version of him. 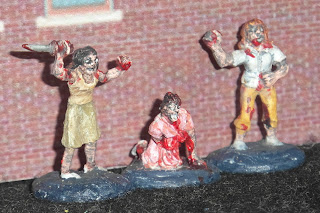 The final three figures in this motley crew are all females.  The third figure on the right did have a huge pair of scissors in her right had but these suffered during the cleaning up process, I didn't particularly like them in any event as they were grossly over-scaled and were more akin to garden shears.
The crawling figure I do like and would really like to see a lot more "crawlers" - in case you're wondering why the figure is crawling, her left leg is missing from below her knee (unlike the footless zombie jogger I featured a while ago)

On a final note, I realised that as I come closer to starting up my own zombie campaign the games will probably be being played out on a Saturday, leaving me little to no time to complete a blog on a Saturday as I have been endeavouring to do.
Consequently my future blogs will be published on a Monday, easing the pressure somewhat.

Well that's all this week and as always, thanks for looking, all comments are welcomed and appreciated and
if I haven't already welcomed you then "Welcome", I hope you find something here to interest you.
Posted by Zabadak at 04:25