No great accomplishments this weeks this week but I have had time to reflect on the fact that it's been just over a year since I was taken into hospital and and whilst there, I started on this Zombie project.  My thoughts at the time were very jumbled (drugs) but I knew that a totally new venture would take a long time to get underway.  I think that at the time I said it would take about a year and that I would be in full swing by Xmas 2012. Over the last year I have had many, many nice surprises and made very many friends in the Zombie Wargaming Community, all of whom have been encouraging and helpful.
At the time, starting a new project from scratch was a daunting task but bit by bit I've made steady progress, so much so that I even managed my first practise game, using the All Things Zombie rules but without the zombies !  I had two friends actually playing the game whilst I tried to keep them to the rules.  It worked well, with only a few minor problems, no photographs were taken (to protect the innocent), but we're already planning our next game - with Zombies ! 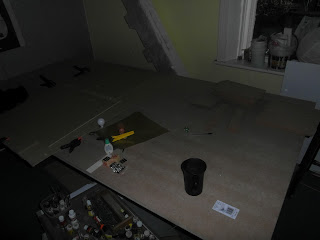 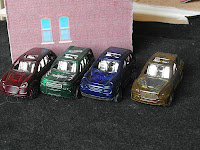 Efforts to advance my Zombie project over the last week has mainly been concentrated on further work on my urban terrain boards, however continued problems with my back haven't helped the cause. I'll be writing up a complete blog about the boards when they're nearer completion.
The photograph to the right shows the initial stages in the making of the terrain boards, but due to the cameraman's myopia doesn't really show that much.
The bases board (the large sheet of MDF with the bar-code showing in the bottom right hand corner)
measures 8ft x 4ft (2400mm x 1200mm) and one of the boards that will go on top can just be made out on the left hand side of the photo.
To fill the streets with rush hour traffic even more another trip to Poundland/World garnered me four more SUV type civilian vehicles.  I had thought that a quick going over in Acetone would remove the transfers (decals), but I soon discovered that they were actually a part of the overall paintwork. 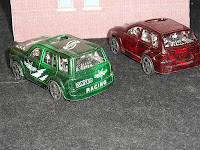 They have the same garish silver interior as the last set of Military style Humvees/SUV's and are basically the same design, lacking the pull-back and let go motors.
They'll all be getting their windows blanked out and will all end up with a new paint job. 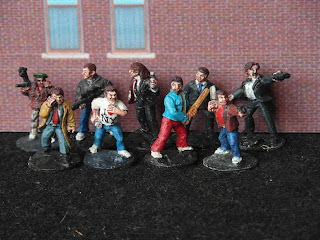 I've also been plodding away at some  of my Wargames Foundry figures and have managed to finish off these nine.

They're the usual mix of suits, survivors and civilians most of whom will be in most people's collections no doubt.
As you've probably gathered, I'm pretty much bored painting figures and really need to turn my attentions to making some building to fill my Urban Terrain as well as reading rules, planning my campaign, getting a few practice games in, reading blogs, commenting on blogs, reading forums, watching for new figure releases etc. etc. etc.

There just isn't enough time in the week !

That's it though for this week and as always, all comments are welcomed and appreciated.

I don't think I've gained any followers in the last week or so, but if you're lurking out there, "Welcome to my blog", I hope you find something to amuse or interest you.
Posted by Zabadak at 08:12