Another week and my enthusiasm has once again been lifted thanks mainly to the encouragement of others in the zombie community. 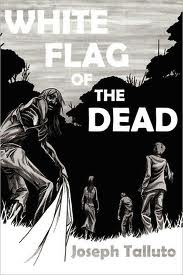 This week I finished off the novel "White Flag of the Dead" and I thoroughly enjoyed it.  The book is not going to win any prizes for literature nor is the story particularly groundbreaking but it is a very easy read.  The story itself follows a central character through the outbreak and his building up of a community around him and reminds me very much of Sean T. Pages "War Against the Walking Dead",
The writer uses little in the way of what I'd call "fluff"; he sticks to the action and what could be considered the more interesting stuff, so time can pass quite quickly if for example there are days when all that would happen is a repeat of say foraging for supplies then this may well only merit a single line - which I quite like.
The book does suffer slightly from poor proof-reading but unlike some other novels I've read it doesn't seem to detract from either the story or the pace of the book.  This is one of those books that you'd label a page turner or "Just one more chapter then I'll turn in for the night" type of books.
I've enjoyed the read so much that as soon as I'd finished it I'd bought and started the second in the series "Taking it Back" and I'm now about half-way through that one too ! There are at least five books in the series of "White Flag of the Dead" and as long as the standard of these first two is continued I'll end up reading them all.
(The first book cost me less than £2 and I believe all the others are under £4 from Amazon Kindle) 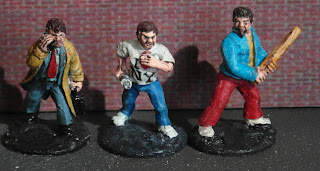 Following on from last week's post here's another look at the figures I featured as a group.
They are of course all Wargames Foundry figures, with the three photographs being split into roughly civilians, suits and survivors for no real reason.
I'm still considering what to do with my basing and whether or not to flock them (I'm experimenting with various flock techniques at the moment, including making my own, but I'm still undecided.

The photographs of course are still up to my usual standard of naff, but keeping them small and a little out of focus means less errors in painting can be seen (Zabadak's photography hint #23)
I'm well on my way to getting my urban terrain boards to the point where they're usable. I'm currently concentrating on centre road-markings and junction markings using masking tape as an aid.
Next week's blog should feature the making of my urban terrain boards, from start to finish.
That's all for this week, thanks all for taking the time to look and  of course if you feel like commenting, feel free to do so; all comments are welcomed and appreciated.
Posted by Zabadak at 10:28