Fighting through the pain barrier (ably assisted by copious amounts of drugs I might add), I have managed to all but finish this new build. Other than some touching up of various 'white spots' overlooked in the 'edging' process and all the roof furniture and fittings still to do, the bulk of this box building exercise has been completed with the results shown in the photograph on the right.
Essentially the original vision of the building is as shown, but of course once this build was started other ideas came to mind.
The major change was that rather than a single building in three parts, I made three separate, but similar, buildings that could be joined to make the one shown.
Of course this entailed getting an additional print of an extra wall I would need to complete one of the three buildings (as luck would have it I did have extra copies of most everything else).
Whilst it may not look it from the photographs, the walls are vertical and don't actually slope off in a multitude of angles.
I was aware of this problem from the start of this build and have often thought about how the height of the model (at about 15 inches) could easily be out of 'true'; consequently I was checking with my trusty set-square constantly!


The roof of the main building had to have a helipad, it was just crying out for one, but the 'problem' came with the addition of the access from the building to the pad itself.
Unfortunately the roof-top access as I had envisaged it (shown below) just looked out of place alongside the helipad, crowding the whole of the roof unnecessarily- it just looked wrong.
Consequently I will be designing and making another roof-top access,
The rear and sides of the main, central  building have nothing of real interest, save possibly for the fire exit door on the ground floor with its two adjacent windowless pieces of wall.
The one regret I do have about this whole central building though is the lazy way I duplicated the original sheet of three floors and merely pasted it above another copy, leaving the darkened band of windows half way up the building, rather than have lighter windows, as in the 'extra bit' shown at the top.
This can be readily seen in the shot below of the obligatory boring side of the main building.
The central building measure about 11"wide by  15" deep and about 18" high.

The left hand building isn't remarkable , but has a bit of variation, in as much as it has a rear pair of fire exit doors in the centre of the long wall and it also has entrances at either end (on the short walls), although originally only one would have been necessary as the other would have been up against the central building). This building is about 15" wide, by 9" deep and about 9" high.

The final part of this build, the right hand building was built at five stories high, more for aesthetic reasons than for any other. I just liked the idea of varying roof heights on this model. The one thing that did come about though was that I  'lost' the middle band of darkened windows, as only the upper part of the extra sheets were used. The building looks much 'cleaner; not having the darkened band n and is far more pleasing to the eye in my opinion.
Again this building wasn't meant to have two entrances, just a pair of fire-escape doors at one end, but with the buildings all being made to be used as separately too a pair of 'front' doors added.
This building is about 11" wide, 9" deep and 15" high. 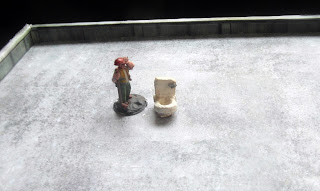 So, what was the going to be  original purpose for this building ?
Perhaps some university campus building ?
Or maybe the start of some inter-city projects ?
Maybe even a high-tech offices featuring labs (Offices of the CDC for example) or some Interweb.com establishment set in pleasant suburbia ?
The only clue I'll give you is the photograph on the right, featuring Sid wondering what the hell a toilet is doing on the roof-top. (It's a TV reference which I'm sure many of you will get).

I've another scratchbuild project in mind (rather than another box-build) but that will have to wait until my last planned scenario is played (oh for someone to throw dice with) and my game-board is cleared. In the meantime though I have roof-accesses to make and air conditioning vents and HVACs to make, so that's it then for this week.

My other blog, which shows my (almost) completed arena for my Gladiator project and can be found HERE
Posted by Zabadak at 08:14