Well, 2015 came and went in a flash and although I didn't manage to put any  paint on any figures this last year I still feel that I did manage to a few things done.

In January, I finished off this Water Tower,

and a random Downtown building

I managed to play games in February and March, which was a welcome break  from fiddling about with bits of scrap, foamboard and paper printouts.


For nearly all of April and May I was ill and was unable to blog, but eventually was recovered enough to continue blogging in June with another downtown office building built from foamboard (no interior).
I did also manage to fit in another game in June too, which was a bonus.

July and August were mostly taken up  with minor scenic bits (mostly roof-top furniture) and a large composite model made from foamboard,  that had originally been intended for use as a Hospital.

September saw me complete one of the smaller models I built during 2015, a container office
I'd also managed to make lots of containers at about the same time too.
I managed to fit another game in during October and built up enough enthusiasm to continue with a build I had started in 2012 - The Stree. This latter build has had to take a back seat for the moment as I await printouts for the interior walls and floors 0 and a back staircase still needs to be built.


And other than a few minor bits and pieces, that was it for me in 2015, which on reflection turned out much better than I thought it would. For 2016, I hope that a can maintain my waning enthusiasm to at least that of 2015.

That's ot then for this week (and for this year too), I hope you all have had an enjoyable seasonal break and are all looking forward to a prosperous and industrious New Year.

Nothing to report this week, but I will take the opportunity to wish everyone of my followers "Seasonal Greetings".
It's been a very strange year for me, but quite productive in some respects. more of which I'll be posting about next week.
But for all those that follow this blog and post comments I am truly appreciative. For those who have their own blogs that I also follow (many more than I can find time to comment on) I have also to thank, for their inspirational posts, their entertaining aars,, wonderful painting etc. etc.

I hope you all have a great holiday season and enjoy the break; to those of you in the painting challenge -good luck and to those in the unfortunate position of having to work over the holiday period, here's hoping it's not too arduous.

Until next time, thanks for taking the time to read.

The photograph shows my paint-table as it has been for much of 2015 and you wonder why I haven't painted any 28mms this year!
There are some 28mms(though not for my zombies); they're just about visible,  on the table (bottom right) that have had some paint applied, but even though they were started in January (or thereabouts ), they're still not finished ! There are other 28mm figures there too for my zombie games, but they'll need an archaeological expedition to find them.
In the bottom centre are four more 54mms that I'm currently painting for my Gladiator project, the latter having received much of my painting time this year.
In case you're wondering, I don't really use this table to sit and paint at, I tend to use an additional separate tray with the figures and paints I'll be using on it and I also have a large box of paints (of a similar size to the above table) containing mostly tube of acrylic, rather than pots.
Painting anything is more or less currently off my agenda, not for any major health reasons (for a change), but for flagging enthusiasm and other real-life issues.

That's it for this week, no progress in anything zombie-related ! 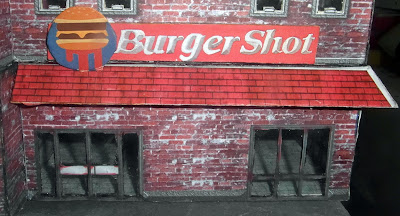